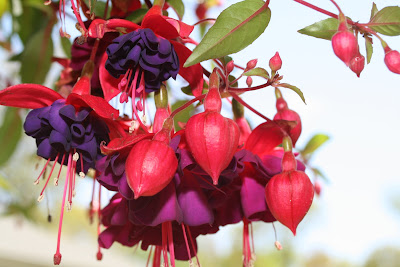 Happy Mother's Day to you mothers (pets count!) (Especially THIS Mother's Day, pets count DOUBLE!) What a wonderful day I am having. I wish I could give this day to every reader--this expansive sense of gratitude for my blessings; the sheer joy I feel watching my garden burst into bloom; the almost palpable sense that this very moment is perfect and I need to store it in my heart for the gray days.

I will talk more about my perfect Mother's Day at some point but for right now, I want to talk All Puppy, All the Time. 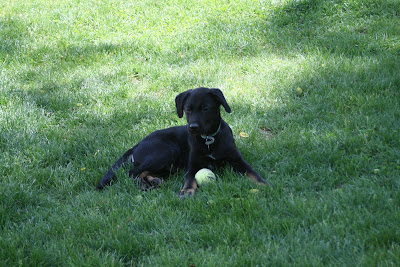 I am so smitten with our new puppy. Y'all would just laugh at me.

You all know that I am never given to exaggeration, right? I'm a straight-forward, laid-back, allergic-to-drama-and-hyperbole kind of gal. Just for the record, though: he IS the most adorable, sweetest, best, smartest puppy EVER.

Things about him I just adore:

He puts his leg up to scratch his neck and usually topples completely over.

His back end seems occasionally to come loose from his front and his back paws will sort of creep in front, turning him around and befuddling him completely.

Sometimes, very occasionally, Scout will play a game of “chase” with the puppy instead of BARKING AT HIM ALL THE TIME and when that happens, I laugh so hard that I have to sit down, completely incapacitated. (Actually, some 48 hours into our new adventure, Scout has just...blossomed as a big brother. 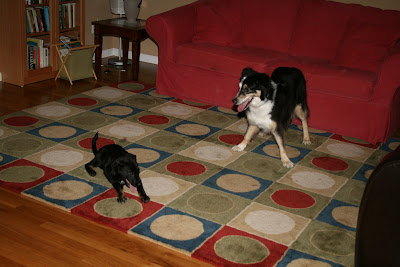 He baby-sits the puppy outside, playing endless games of chase in which he completely tuckers the little boy out. He may have even house-broken the little guy, who has done his business outside since the first night he was here.)

Austin has a little white patch on his chest and he has a big white patch shaped like a star on his bottom. He makes me think of the Sneetches.

If I scratch his neck or rub his belly, his eyes will roll back in his head and he is hypnotized.

He has the most beautiful (huge) feet —black pads but that gorgeous shepherd brindle colored fur around them.

His ears are lined in the same light fur. 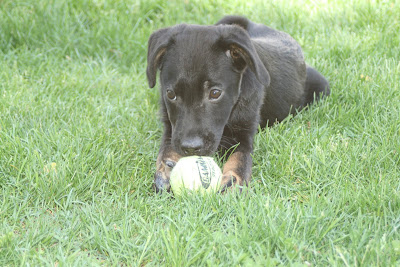 He's a very serious puppy and he will sit looking like he is trying to decipher the world and then suddenly? He'll chew on his own foot.

Coop gave him a bath and it turns out that even DOG babies smell good after their baths.

When he’s ready to nap, he finds me and falls asleep on my shoe.

So far, the cats are fairly resigned to this new interloper. Thomas is pretty "whatever" with him (oddly enough, it finally occurred to me who Thomas would be if he were reincarnated as a human: The Big Labowski) but Edward will actively hiss if the puppy comes near and if the puppy comes too near, Edward will show him the business end of some claws. The puppy is a quick study and he gives Edward a wide berth but he routinely works Thomas's head over. I think he's so smart! Most of my friends can't even tell Edward and Thomas apart!

I spend just a huge amount of time saying, "What are you eating?" and "Don't eat that."

We were tossing around names in the car and Ana (11) liked Tex, short for Texas. She called her friend Nina to tell her about the puppy and Nina and I suggested "Austin" at almost the same time. Ana texted her dad and asked if he liked that. He said, "I like'Austin'" so in Ana's mind, it was settled. She started calling the puppy Austin.

We forgot, however, about the Jane factor.

Ana, in the manner of a big sister wanting to show the little sister that the little one doesn't ALWAYS get her way, introduced the puppy to Jane (8) as Austin.

"We can't name the puppy Austin because it will make me too sad every time I say it." Jane proceeded to try out all the names of her various boy friends and every time Ana called the puppy 'Austin,' Jane said, "We ALL have to agree." or "That is NOT his name."

And then she met him.

And fell madly in love.

By the time Coop got home from work and weighed in that he wasn't totally sure about naming the puppy Austin, that was his NAME.

So, in a way, Jane ended up naming this pet, much as she has every other one.

(I get this little secret Joy Rush whenever anyone calls him because he's named after a city (like Sydney was) and it's a city I love AND whenever anyone shortens his name, he or she calls him, "Aussie." Seems just right to me.)

So, can I tell y'all something?

Last night as I was lying awake listening to the puppy howl in his crate (we're Ferberizing him, something we never did with our human children), I thought a lot about Sydney and how my heart is still sore and missing her but how great it is that all that excess love I had left over when she died now has a place to go. It seems to me that if you've lost someone or a pet (or, hell, I still mourn the demise of our Ficus), part of the hard part of that kind of loss is not knowing what to do with that leftover love. My conclusion (at 2:00 AM) was that our supply of love is never diminished --with each new addition, our hearts expand. But it's kind of the ultimate recycling when not only do you get a new supply of love for a new family member, you also get to channel the love you weren't using toward him/her/it.

Does that make sense at all? 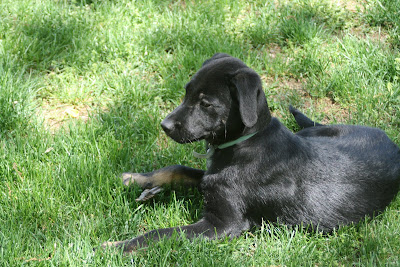 Unknown said…
oh he is LOVELY!!!!!! (he look just like my Ferguson) and I am glad he is filling the void. I looooooooove puppies.

LaDonna said…
So, it's been three nights now, right? How's the ferberizing working for you? Have you caved and let him sleep on your feet yet? I honestly can't sleep without my fur baby curled up keeping my toes warm.

He really is a sweet little guy! So glad the girls love him, too. And yes, somehow calling him Aussie for short seems an appropriate tribute to Syd. :)
May 11, 2009 at 2:08 PM

Ann in NJ said…
What a little beauty! Personally, all my experiences with Lab mixes have been good, and Shepherds tend to be smart, so you could have a best of both worlds combination there!

MadMad said…
Oh, he's so cute, and I love the stories.(You do know what big paws mean, right? Oh, get your mind out of the gutter!) But my favorite part was the paragraph about Jane, and seeing their names together: Jane and Austin/Jane Austen. Kinda. You know. Enough for the feminist English major in me to get a kick out of it.
May 11, 2009 at 5:48 PM

Susan said…
I have not experienced the loss, but Hilda is getting up there and though my husband says no to another dog when the time comes - I can no longer imagine being without one.

Hannah said…
Yes, exactly, love expands. It's like when you're pregnant with your second child and you wonder how you could possibly love another baby as much as you do your first. And then ... you just DO. Because your heart is suddenly bigger.