Did I Mention the FREAKING Cucumbers? 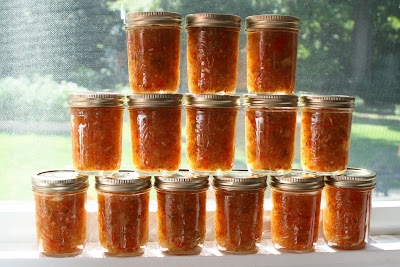 See that? That's today's pickling adventure --Sweet Pickled Relish. I'm a little concerned about it because it doesn't look anything like, well, THIS. 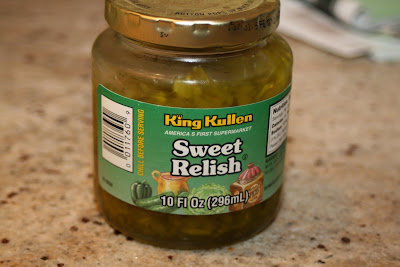 Which is the store-bought version.

Now that I think about it, though, the ingredient list doesn't bear any resemblance to THIS, either. 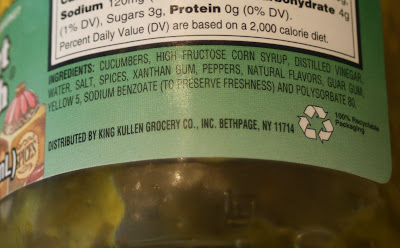 I notice they added color--which explains my somewhat anemic looking version, I guess.

I ALSO noticed that they added "high fructose corn syrup," too. I'm convinced that when archaeologists dig up our civilization millions of years from now, they will find that the secret to the demise of our entire population is the fact that we are poisoning ourselves with high-fructose corn syrup. Just TRY to buy things without it. And to think we are feeding that to our CHILDREN--because we are, no matter how we try to avoid it. It's in YOGURT. Ketchup. Ice cream.

In fact there are few things in which it is not.

It is NOT, however, in cucumbers. This is the remainder of the cukes in our house after making relish and pickles and giving them away (I told the house cleaners that part of their clean-up was to take away cucumbers) and looking for blemishes which might excuse the fact that I am pitching them over the back fence to feed the rabbits... after all of that, I still have THIS: 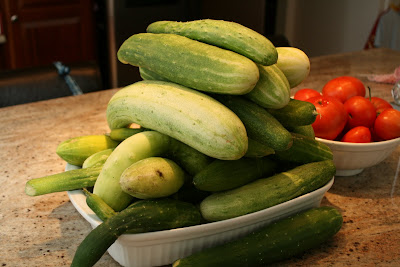 (Note the bowl of tomatoes--merely a precursor of the harvest we'll have of THEM.)

I think I am Cucumbered OUT.

I've resorted to using them as a drying rack for my new socks, a gift for my uncle who hosted us so amazingly graciously in Germany. 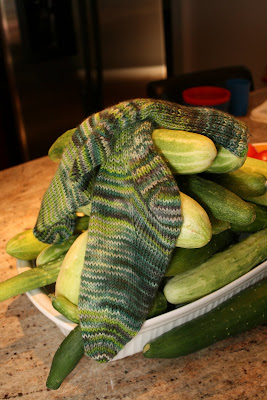 The yarn is Claudia Hand-Paint (my drug of choice) in the flavor entitled appropriately enough, "Eat Your Veggies." And you GUYS, I knitted them in five days. AND I didn't run out of yarn. AND, I had house-guests. I'm on something of a sock BINGE, even though I didn't go to the Sock Summit.

MadMad said…
Oh, the socks are great, and will make the perfect gift! It took some digging, but I was able to find both an awesome ketchup (Wild Harvest Organic) and yogurt without HFCS, if you're interested...
August 15, 2009 at 7:37 AM

Anonymous said…
What a woman! I think the relish looks delicious and I'm sure your uncle will love the socks. I'm going to have to check out that sock yarn.
August 15, 2009 at 8:54 AM

Bond. Jane Bond. said…
Hi, momma! I think today's blog was really funny. I have to admit, I'm done with the cucumbers now. Have you seen how many BABBY cucumbers are in all the gradens?? By the way, don't stop complaining, now, cuz the bell pepers are on their way!!
August 15, 2009 at 4:15 PM

Mary Ellen said…
The relish AND the socks both look terrific.

I continue to be unbearably jealous of your harvest. We lost almost everything in the 6 weeks of rain (and now the weather is perfect for growing. Ironic, huh?)

Sherry Sea from Austin said…
I share your outrage at the ubiquitous corn syrup. When even my beloved Orangina started substituting syrup for sugar, I howled. But then I saw the upside: I now think of sugar as a health food.
August 16, 2009 at 2:33 PM

Mokihana said…
Adore the socks and I'm not even a green person... however, I make the exception with those. And may I add that I was hoping you'd get to Sock Summit because then I could've met you for real and you wouldn't have had to deal with all the cucumbers but the relish really does look lovely. Whew.
August 17, 2009 at 1:39 AM

Jen said…
I love the Eat Your Veggies yarn. Alas, I am AGES away from being talented enough to knit a pair of socks. I'm still doing scarves for my kids' stuffed animals.

Susan said…
I saw some relish at the fair that was neon green! Don't you have any food kitchens in town? Our are always asking for backyard harvests.
August 19, 2009 at 12:44 AM

Karen from Germany said…
Believe it or not, I managed to grow *one* cucumber in my garden... Ok, it was my first try this year, but I admit you get me all frustrated about being too busy for serious gardening.
Or is it a matter of Frankfurt weather instead of Long Island? Still, I bet we had as much rain this summer as you did.
Well... I'll give it a try again next year...