And Just Like That, It's Over and We're On to New Glamour

Okay, so I woke up yesterday and that weird kind of malaise I've been feeling was just...gone. Good riddance, I say. I've got things to do!

My parents are coming on Thursday so I am completely freaking the frak out. Since I can't A) lose 30 pounds or B) finish my book and have it published and appear on Oprah charming the world with my wit and...um...wit (?), I decided to completely gut my office and turn it into my yarn/creative space.

My husband talked me down off of the "Tile An Entire Room Before My Parents Get Here on Thursday" ledge, though. He's very wise. Because somewhere along the line when I was making all of my plans, I forgot that I would still have to, you know, PARENT, not to mention, um, sleep.

(I did manage to sneak in a little bit of tile work, anyway. Want to see? 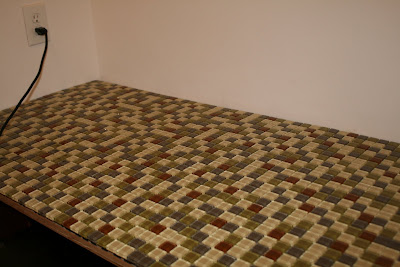 This is the Butler's Pantry, which has had a plywood counter-top for a year-and-a-half-now. (Shaddup.) (It never DID have a Butler.) (I'm going to grout it tomorrow.)

But then, horror of horrors, Edward the Kitty got sick with HIS familiar malaise. The one where he can't go poop and his meow gets all "crooked," as Jane (almost 9) says.

I called to make an appointment for him but I had to wait to make it until my husband could come home and help me get Edward out from under the guest room sofa. Which my husband did, because he's a prince of a guy. We shut Eddy into our bedroom with food and water until time to see the vet.

Ana (11) and I STILL had to get him out from under the bed--that was fun--and then load him into the carrier. Which was equally fun--although those orange tabbies are so nice. He was fighting like a tiger to keep from going into the carrier but he never scratched me, not once.

He did, however, FART at me.

You know how I feel about that word. (Look at Number 93.)

After I recovered consciousness and Ana stopped laughing, I said, "Let's never speak of this again." (Except, of course, I'm telling y'all because it's so funny.) (And nauseating.)

Then I took him to the vet.

There was some additional feline flatulence on the way there and now I think I have to sell my van.

Also, I told the people at the vet's office that I had tried to buy the low-residue food (which is supposed to make this constipation issue much better) but the pet store required a prescription for it. They were all, like, "Yup, yeah, I know."

And I looked at them. Finally I said, "Well, what is THAT about? How many people abuse CAT FOOD?"

They just looked at me. And then the tech started laughing like crazy.

Y'all? Why are vets writing prescriptions for pet food? I mean, there is nothing MEDICATED in the food. I don't get it. Who would willingly abuse getting some cat food at six times the price without a prescription? Is there a black market for pet food? Do thieves break into veterinary offices and steal cans of bland, tasteless, low-residue food to sell on it?

Seriously, I want to know.
Email Post
Labels: A picture is Worth at Least Ten Words cats Edward Enough With The Whining Already mothers Not enough therapy in the WORLD sick the Glamah of it All tile

Anonymous said…
Brilliant...not just shiny. I love that you are ranting about random unfathomable bits of life.
October 6, 2009 at 10:42 PM

kim said…
Having just finished a major tiling job myself, I am totally impressed. Because I always tell people that "tiling is a two-person job." It is fabulous. I don't mind the grouting; it's the hideous cleaning of the tile that bothers me.

Anonymous said…
Impressive tiling job! Want to come tile the backsplash in my kitchen? I have been living with builder white/no tile/paint sample splotches on my kitchen wall for a very long time now.

As for the cat and his bowel issues... Cats being cats, Edward may eventually (or quite quickly) refuse to eat that nasty bland food. If that is the case, or if you just want to read about feeding your cat a species appropriate diet with commercially available canned food, go here: http://www.catinfo.org/index.htm

I see that you already feed him canned food, so that is great! You may want to mix some extra water in his diet to help keep his stools softer.

If he continues to have problems, you might want to talk to the vet about prophylactically adding Miralax (1/8 to 1/4 teaspoon a day) to his food. If you do this, you definitely need to add water to food since Miralax draws water into the bowel and they can get dehydrated. I don't know what other medical issues Edward might have, so definitely talk to the vet before doing this. With this dosage, a $15 bottle of Miralax will last you forevah! Much cheaper than prescription food.

I haven't gone this route yet, but if he is still having problems, many people who have cats with bowel issues feed their cats a raw diet and many problems disappear. You can find info about raw diets on that website I posted as well.

Best love, and many soothing tummy rubs, to Edward Kitty.

As for the, umm, cat-generated hazmat situation, I can only offer you sympathy. And a warning. Giving a cat an enema is an occasion for chain mail, covered by a Tyvek painter's suit and a face mask. (You really, really don't want to know how I learned this. Just trust me!)

And, last but not least, if things get ever get really critical, you need to get the cat to the Animal Medical Center in Manhattan. Here's the link.

They have the best equipment and the widest assortment of specialists on the East Coast, and it's not that hard for you to get there. (LIE to the bridge, to the FDR, exit and you're there. They even have a few parking spaces!)

Lynn said…
Hmmm, sounds like me wanting to re-landscape before my bil and his wife come in. Tonight. Yet the room they are staying in still needs to be cleaned out.
October 7, 2009 at 10:52 AM

Unknown said…
LOL! That was excellent!!

Poor Edward, having his personal matters discussed on the Interwebs for all to see...(and imagine the smell). I have a flatulent dog, who had a lovely long-haired tail he likes to wag to "share" the event...

WolfWalker said…
The tile job looks great! As for the other problem, you might want to try and add a bit of pure canned pumpkin (not pumpkin pie mix) to the kitty's diet. It's actually good for constipation and diarrhea......go figure! LOL!

Ann in NJ said…
Beautiful tile! Is that a counter? Considering every flat surface in my house is covered with junk, a lovely, empty counter is a gorgeous thing.

Kathy Ireland said…
Now we're on the same page. Autumn is just my favourite season and I am anything but quiet. It's also usually my "poorest" season (after over spending all summer and trying to save for the over-spending coming up for Christmas) but there are always so many things I want to do in the Fall that I get excited just thinking about them. I'm glad you're feeling better! Have a fun weekend and happy Thanksgiving to my best non-Canadian, Canadian friend.
October 8, 2009 at 8:06 AM

Miri said…
Freaking out (and the odd kitty flatulence) = melancholy buster? I never knew! You are so funny and witty. I *keep* telling Oprah this.
October 8, 2009 at 10:10 AM

Sherry Sea from Austin said…
Because Halloween is around the corner, I can't help volunteering this story, re your kitty's tummy troubles. In a recent episode of Radio Lab, a researcher into toxoplasmosis claimed that the toxo parasite rewires the mammalian brain. It seems toxos can't reproduce anywhere but in a feline, so when they find themselves in a rodent, they reprogram the rodent to become attracted to cat urine. Two separate studies have shown that humans with toxo are 2-4 times more likely to die in a car accident. Just as toxo-infected rats make imprudent decisions about felines, it may be that humans become more risk-friendly after a toxo infection. Yikes!!
October 8, 2009 at 5:09 PM