And We All Lived Stickily Ever After

I think it was a good party.

I never actually KNOW, the same way I never knew if I'd done well on a test in school, but I THINK Jane's Ninth Birthday Chocolate Extravaganza was a success.

If it were measured by sheer volume of chocolate available and consumed, I'm pretty sure we'd have won some sort of prize. (As always, click to enlarge.) 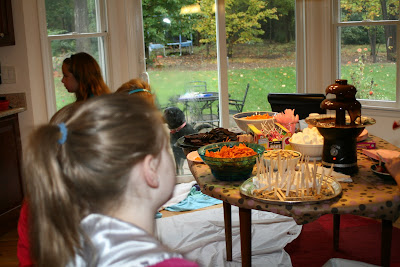 I had made shirts for the kids and they decorated them with fabric paints. 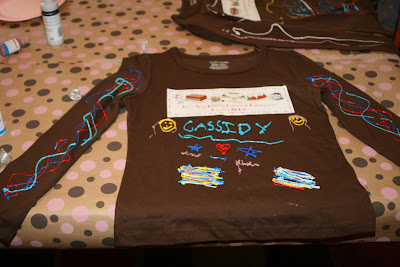 We played some games, like stack the Oreos and guess the number of M&Ms in the jar. 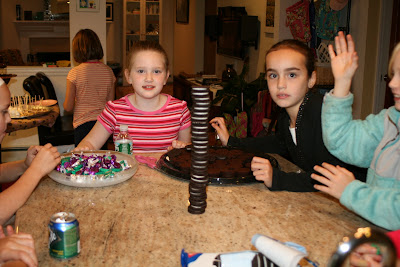 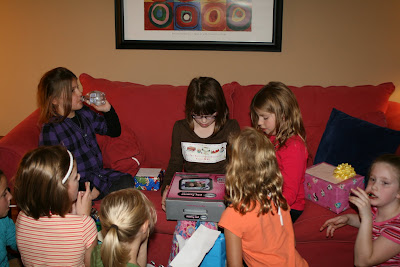 Probably the best thing I did was "hire" my older daughter and two of her friends to help run the games. ("Hire" in the sense that they got to eat as much chocolate as they could stand.) I made shirts for them, too, and called them the Oompa-Loompas. They were pretty helpful, even if they did have a tendency to disappear and do their own thing every once in a while. (The nerve!) 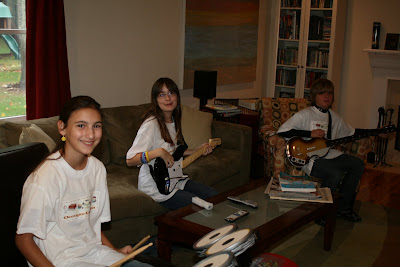 But they did a great job and even wrote the "Who Gave What" list during the present opening. 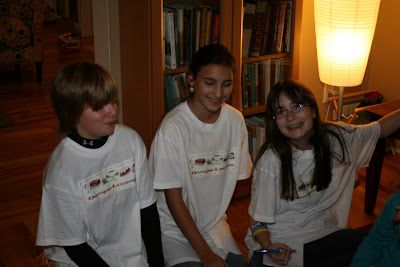 In the end, the guests took home these little goody boxes 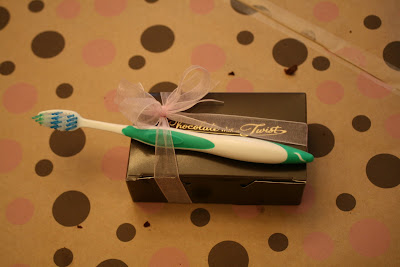 (Yes that's a toothbrush. I must have my little jokes.) 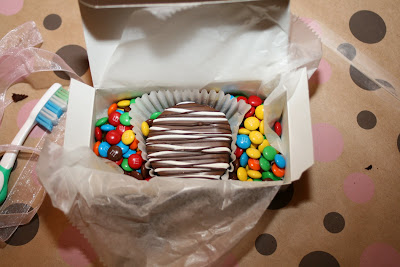 And Austin and I cleaned chocolate off of things like the basement door. 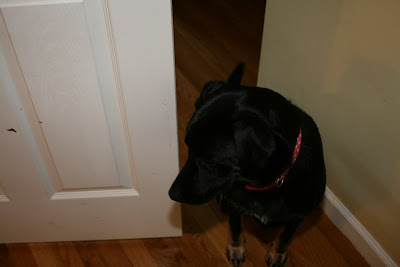 A side benefit to throwing this party is that I had no problem at all starting (RE-starting. Sigh. AGAIN.) my diet today because, LORDY, I am SICK OF CHOCOLATE.

Hey, I guess that means it really WAS a good party!
Email Post
Labels: A picture is Worth at Least Ten Words Ana Freaking Fat Genes Happily Ever After I'm so DONE Jane joy love pink bows The World According to Jane WHAT? Doesn't everyone?

joannamauselina said…
I feel sort of sick to my stomach just looking at the pictures. Those young folks have better constitutions, I guess. Two See's and I am done in. It looks like a great party. I looked for the fountain, but didn't see it. Need another picture.
October 19, 2009 at 1:40 PM

Mrs.Q said…
My teeth hurt looking at all that chocolate...Love the toothbrush touch!

Susan said…
I'll bet all of the parents got a giggle out of the toothbrush in the goody bag.

Maybe you've filled the kids with so much chocolate that they won't want their Halloween hauls. That would be a good thing.
October 19, 2009 at 5:24 PM

All that sugar looks yummy - and not too hard in the way of kitchen time - which is a good thing.

ccr in MA said…
If you achieved Sick Of Chocolate, then yes, call that a success. I love the toothbrush favors! Mighty clever of you.
October 19, 2009 at 8:29 PM

the "helper" older sibling and friends!

Sherry Sea from Austin said…
Looks like a fun party! My daughter is stuck with a mom whose imagination, where parties are concerned, runs from "provide a keg" to "rent Harry Porter". Poor thing.
October 21, 2009 at 7:56 AM

Candi said…
Barb - you have to know how cool you are!! You give the best parties for your girls! They are so lucky to have you for a mom (and by the way, I am SO emailing you for party ideas when Sabrina's bday comes around in June!)
October 21, 2009 at 9:13 AM

LaDonna said…
Wow, Barb! I may just have to totally steal this idea for Marissa's birthday party this year! Now I'm off to go call my girlfriend who has a chocolate fountain to see if she'll let me borrow it...
October 21, 2009 at 4:56 PM