Today is my 45th birthday.

It feels like a big birthday to me but I say that about every birthday everyone has ever had so what do I know. (Ana will be 12--almost a teenager--that's huge!  Jane is in the last year of single digits!  ENORMOUS!  Coop is 43...well, okay, that's only significant in that he still looks TWENTY! Puppy Austin just turned ONE--I wonder if we'll let him live until he's TWO?  HUGE!)

HOW THE HELL DID I GET HERE??

I'm spending my birthday having a little "Momcation," as one of my readers called it, and it's been pretty blissful.  My family spoiled me rotten before they left to go skiing. The pets gave me a Starbucks gift card. (I may indulge in a whole milk latte today! Do I know how to party or what?)

The girls gave me this incredible thing called an Aerogarden which should allow me to grow tomatoes inside during the winter!  WOOHOO! 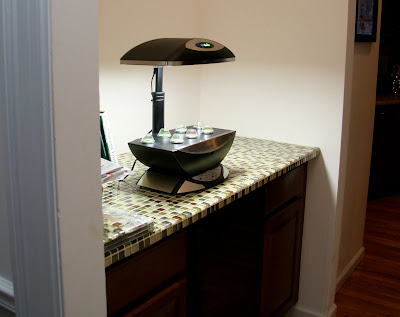 And Coop?  Coop did one of his famous Reading Barb's Mind (TM) tricks and gave me a membership to my favorite public radio station up here, WFUV. WFUV is what my favorite radio station in Austin used to be, PLUS, it has NPR news!  I love it and I really wanted to become a member during the Winter Membership drive but we sent money for relief in Haiti this winter, so I resolved to become a member next go-around.  And then Coop joined for me.

He does that.  Somehow he always knows, without me even saying anything.

It's a good trick.

Also for my birthday, Coop and I went to see the Plastic Ono Band, which was quite the experience, especially sober.  I must confess that I just don't really GET the whole Yoko Ono obsession.  I may be in the minority on this because a lot of music people I really respect LOVE HER. I just...it's...well.  At one point, I said, "We could have just stayed home and stepped on the cats."

Coop thinks it speaks to the enormous influence of John Lennon.

Anyway, it was fun.  And the woman can still put on a great show...if not exactly a musical one.  I hope something similar can be said of me when I'M 77.

In other news, the Knitting Olympics continues. Oh, how I hate my event.  I hate this whole project.  Still I persevere because I am going for the gold.  (After which, I might just take this damn thing out and run it over with my car.) 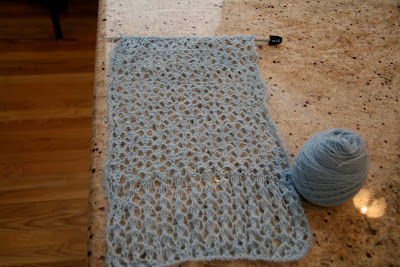 Pay no attention to that large section where it's clear I reversed the right and wrong side of my lace.  Why, no, that's not driving me crazy, not one little bit.  The thing is, I can't rip it back because this freaking yarn --thread, really-- doesn't rip out without breaking.  So I'm just going forward. I know the judges (in my head) will penalize me.

I actually think I might like lace knitting if I undertook a project with thicker yarn.  But I am hating this thin stuff.  I have to bribe myself with sock knitting in order to continue and not just crash out of the Olympics and give up. 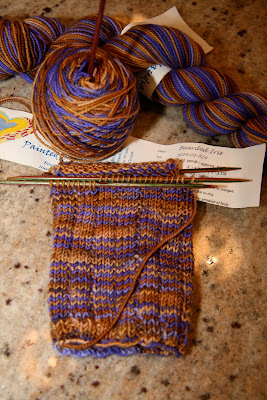 Today, though, I'm going to turn the heel on this sock for Ana, which seems like a very nice thing to have happen on one's 45th birthday.

joannamauselina said…
Happy Birthday!
The lace is really coming along. It
s lovely. Just do the same thing at the other end, and call it a design feature.
February 19, 2010 at 11:42 AM

Unknown said…
"We could have just stayed home and stepped on the cats."OMG I almost peed my pants laughing at that!!!

Unknown said…
Happy Birthday, my friend. May the coming year bring as many blessings as you have chosen to share with us with your blog. You will have an awesome one :)
February 19, 2010 at 1:32 PM

I agree on the lace knitting - gotta use yarn thick enough to keep that me from wanting to kill myself.
February 19, 2010 at 1:51 PM

Suburban Correspondent said…
Extra "that" in my comment - feel free to take it and use it for yourself. Happy Birthday!
February 19, 2010 at 1:52 PM

kim said…
Happy Birthday! I forgot that you shared a birthday with my most favoritest munchkin! Um, the Yoko thing? Well, let me just say that I would rather scrape my fingernails across a blackboard than listen to her sing. Your knitting looks awesome. Enjoy YOUR weekend...
February 19, 2010 at 3:01 PM

Ann in NJ said…
Happy Birthday to you! I got a card I loved for my birthday from a dear friend), so even though I'm not late:

"You probably get lots of cards on your birthday. But what about after? When the balloons have withered and the cake has crumbled? Who's thinking of you then? Who's looing out for you when the spotlight's off? I am, that's who. Me.

Susan said…
I am laughing out loud! Your description of Yoko's music and Ono-philes (did you see how cleverly I did that? (You know, like wine-lovers (and yes, I can digress in a digression too))).

Again, happy birthday, you goof! (I almost called you old goof but then I realized that I am several years older than you so it didn't seem like such a good idea, you know?) (Tempting karma not wise.) (See that, another digression!)
February 19, 2010 at 6:12 PM

Susan said…
Oh my goodness, I got so carried away with all the digressions that I left a sentence just dangling there in mid-air. I was going to say that I totally agree with your assessment of Ono's music.

Rhonda from Baddeck said…
Happy Birthday, Barb! EVERY birthday is a good one - and I'm glad you have some time to yourself in a CLEAN house (which will actually stay that way for more than 20 minutes). The lace knitters always say that "blocking is magic" - maybe that will happen with yours (it looks great from over here!).
February 19, 2010 at 7:37 PM

Hang in there, lace does get easier -- and yes, it is easier to start with thicker yarn. And no fair putting the yarn over the sock yarn label so we can't read it Pretty
February 20, 2010 at 5:19 PM

Barb Matijevich said…
Oops, sorry, it's Claudia Hand-painted yarn in "Bearded Iris." Thuja sock pattern from Knitty.
I guess I've done lace before if you can call it lace when you use thicker yarn. And coincidentally enough, the latest "Interweave Knits" has a whole article on Today's Lace.
February 20, 2010 at 5:31 PM

TheOneTrueSue said…
I hate how I keep getting older. It's just so relentless, this whole aging thing.

Lynn said…
Happy day after your birthday. And don't you just love the Claudia HandPainted sock yarns? She has a wonderful color sense, and I think I have a skein of "Bearded Iris" knocking about in my stash. I have five orphan skeins beautifying the top of my dresser in my boudoir.

Joanna said if first - just do the same thing at the other end of your stole and call it a design feature. Of course, that assumes you know what you did ;)
February 21, 2010 at 8:28 AM

Beth in Seattle said…
Happy, Happy Birthday, Barb. 45 is just the beginning. Great knitters think alike. I immediately thought - just make the same mistake at the other end of your lace piece and call it a design feature. It will make the whole thing even more reversable.
February 21, 2010 at 2:55 PM

Suna Kendall said…
I don't mind my age at all--I keep learning stuff, so it's OK. And wow, that is a NICE Aerogarden. Ours is the basic model, and it is time to start a new crop. My weird husband bought stock in that company, so thank you for your support. :-)

Maryanne said…
Happy Belated Birthday! I hope you enjoyed your week. WFUV is my favorite station too! Where did your family ski? Keep going for the gold~
February 25, 2010 at 1:01 PM

The Dister said…
So, I'm dying to know if you've taken your aerogarden out of the box yet. Have you set it up? Are you using it? I'm anxious to hear what you think. I've always wanted one.
February 26, 2010 at 9:30 AM

Cyndi said…
I found your blog randomly (hit "next blog" and up you popped!) You are FUNNY!! I may have to bookmark you ...

Happy Birthday, even though I don't know you. It seems like the friendly thing to say haha!

Anonymous said…
You'll want to add a facebook button to your blog. I just bookmarked this article, although I had to complete it manually. Simply my $.02 :)