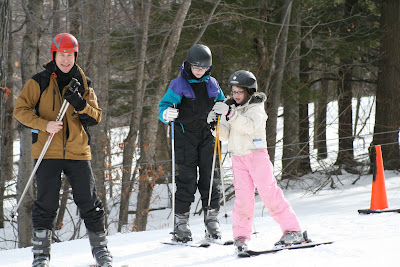 Okay, so not to be all touchy-feely and all... but um, it occurred to me on Saturday, as I was actually climbing around the bunny slope to take pictures of my kids warming up their ski skills, that I'm living this miracle and that I haven't noticed it lately.

Well, to recap: In 2007, I had major foot reconstruction surgery after it was discovered that my foot was full of deformed bones.  I'd been abusing my feet for 42 years before this discovery was made and it might have taken even longer  to figure that out except I, well, couldn't walk.  So, there was this major surgery and the recovery was long and excruciating and after all was said and done, I still couldn't walk.  When I DID walk, the pain was so intense that it stripped every bit of joy right out of my life.  I spent six months on the couch, really depressed.  Then my podiatrist had this middle of the night ephiphany when it came to him that the source of my pain was actually something different from the cause of my surgery.  He built me some custom othotics and my life (and mobility) began again. 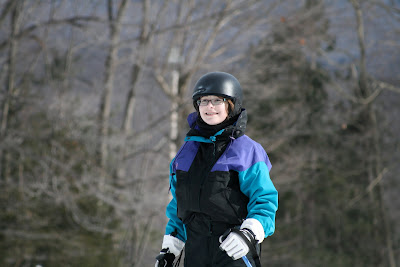 (That was the reader's digest version.)

Right before we came away for this weekend ski vacation (from which we will have already returned by the time you read this, Mr. Internet Robber-Person.  Plus, the only real thing of value we left behind were our pets.  If you want one, we suggest you take the black-and-white dog named Scout. He's the one with the crazy eyes who may or not have just peed on your foot.) 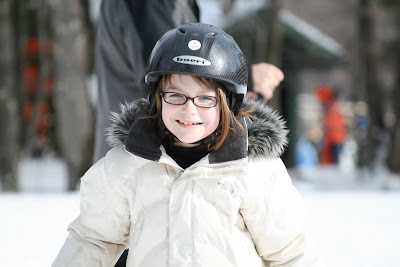 Anyway, it occurred to me that a short time ago, climbing even a bunny hill in pursuit of my kids would have been impossible.  Have I mentioned how grateful I am to be mobile?

I would hate to have missed those faces.
Email Post
Labels: A picture is Worth at Least Ten Words camera foot gratitude humor My Personal Fairy Tale parenting snow The World According to Jane Winter Wonderland

The Dister said…
You know, when I was looking at your previous post I was feeling all disappointed because there were no pictures of my dear friend Barb. And then of course, I thought to myself "d'uh - of course she's not skiing - she's got that bad foot and she's the photographer" and then I thought to myself "how awesome that my dear friend Barb is out, climbing around on a mountain, walking up and down, ON SNOW, taking pictures of her gorgeous kids".
February 8, 2010 at 10:55 AM

joannamauselina said…
They really are cute. Glad you are having a good time. I went cross country skiing often until a baby joined our family. She is twenty now, and probably old enough to take with us. I need to get it together again.
February 8, 2010 at 1:04 PM

Unknown said…
awesome!!! I actually thought of you Saturday afternoon when I was icing my ankle after my karate test. I have to wrap it and take advil and such, but I can move and have fun. Life is good.
February 8, 2010 at 1:12 PM

Ann in NJ said…
Sometimes it's just a matter of reminding ourselves it could be worse. Other times, of course, we need to have a smack across our heads and our noses rubbed in it. Glad you had a good time! Hope you drank lots of hot chocolate (with marshmallows, of course).
February 8, 2010 at 1:29 PM

TheOneTrueSue said…
I'm jealous of your ski trip, and oh so very happy about your mobility. And yes, how soon we forget what we ought to be grateful for - I'm the poster child for that.
February 8, 2010 at 1:38 PM

Annabanana said…
Dude...is it an optical illusion or is Ana almost as tall your spouse? Beautiful pics, looks like it was a beautiful weekend!
February 8, 2010 at 3:24 PM

knittergran said…
Yay for mobility!!!
I've had a broken kneecap (no surgery), knee surgery for something else, and foot surgery, so I know what it's like to be immobile and in pain.
Cute, cute girls!
And thanks for the kind note about my Lewis. I sure do miss him.
February 9, 2010 at 12:14 PM

Susan said…
I can't ski due to knee issues but I always loved getting those photos of the kids, too.

jenn said…
What a beautiful post. It looks like a fun vacation, and hearing your back story makes it truly amazing.
February 10, 2010 at 10:18 AM