Yesterday, Coop took our girls on a five-day ski trip.  They left at about 10:30 or so. (It's winter break up here in the frozen Northeast.  Which is not to be confused with Spring break, which we have at the end of March.)

So, it just happens that last week, which was to be my normal week to have the cleaners come, we had a lot of snow. (Or, as I say in most of the videos I shot that day, "SERIOUS SNOW."

(Why yes, I just used a YouTube VIDEO in a digression.  Please hold your applause until the end.)

At about 10:00 yesterday, the cleaners called: could they please come to make up the snow day.

WHY, YES, THEY CERTAINLY COULD!  AND I WOULD EVEN PAY THEM!!!

(Frankly, I took this as a sign from the Flying Spaghetti Monster that I was meant to spend my vacation NOT CLEANING.)  (You know what this means, don't you?  I have been touched by his Noodly Appendage!) (Also?  That my talent for digressions knows NO BOUNDS.)

So, then, of course, I had to do that insane thing that we at the Cooper Compound call, "Cleaning Before the Cleaners Come."

I know it's crazy.  But A) my cleaners get paid (handsomely) by the hour and B) if I don't try to stash the clutter in some manner, the guys can't even get to the surfaces to clean them. In our house, things tend to migrate from the basement to the bedrooms (things like luggage and books) and from one room to another --landing, for the most part, on the island in the kitchen.  (Which makes me insane.)

Plus, um, it's the Knitting Olympics and there was a fair amount of yarn lying about.

(Well, okay, this is also because it's my birthday week and I might have had a little falling down at Eat.Sleep.Knit and Little Knits and, um...well, okay, KnitPicks.)  (See, I thought I was going to have extra money because the cleaners skipped their normal week. See? See how budgetary and frugal and fiscally responsible I am, honey?? Um, Coop?)

BACK TO THE POINT (assuming I have one) the cleaners were coming so I was insanely cleaning before they got here.  I did all the laundry and made eleventy-hundred trips up and down all the stairs and really fried my poor foot.

It was SO worth it. 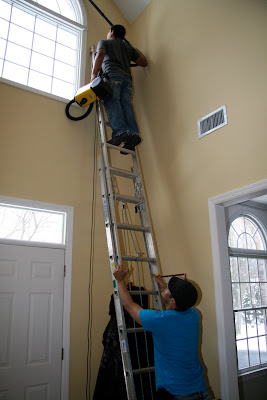 I have written before about my cleaners and their obsession with stripes. This time they took that to an entirely different level. 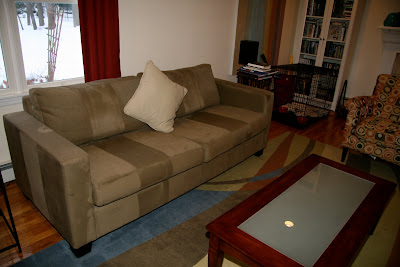 In addition to the couch stripes, which I have come to expect (and which continue to delight me,) they also managed to do some sort of herringbone pattern on the guest room floor. 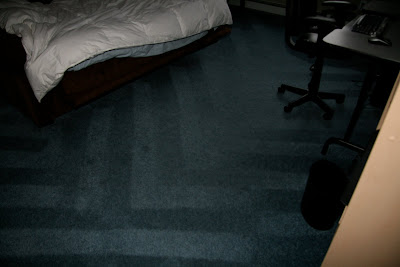 I was kind of weak in the knees after I saw that and I tried to tell the guy, who speaks mostly Spanish.  He was worried that I didn't like it.  "I took a PICTURE!  I LOVE it!!"

(Y'all take pictures of your house cleaners, too, right?  I mean, assuming you need them?)

Anyway, after they left, I lit a fire in the fireplace, and poured a sparkling water over some ice into a wine glass (just to be festive) and I sang Happy Birthday to myself.  (It's not actually until Friday but the kids and my spectacular husband gave me presents before they left.  More about that tomorrow.)

And then, you know, I kind of wished my little family was home to revel in all this good cleanliness.
Email Post
Labels: column Coop foot gratitude Happily Ever After humor I don't do linear--EVER Joy Rush Love Thursday My Personal Fairy Tale snow yarn

TheOneTrueSue said…
I'm so jealous of your cleaners. I used to have cleaners - sob sob sob. I need them back. I NEED STRIPES IN MY LIFE.

Anonymous said…
Never mind the cleaners (who I really want to come to my house!), can I pretty please have your husband? Never, once, has my husband ever, and I mean ever, taken the kids away without me. It is something I dream of.

your cousin Karen said…
Wow, I don't believe this...
German cleaners can't do stripes! Although, thinking about it, I have a wooden floor anyway ;-)

Enjoy your quiet time, Barb, and don't miss your family too much.

Miri said…
THIS IS EVIDENCE OF GOD REWARDING YOU! (Okay, all-caps combined with that statement looks a little creepy.) I truly think you deserve this time of ultimate relaxation amongst the stripes and sparkling water. Happy Birthday Week!
February 18, 2010 at 12:46 PM

Susan said…
If your little family was at home to revel in all the cleanliness, it wouldn't be clean for very long. At least that's been my experience. Have a great birthday and enjoy your momcation (as my sister calls it)!
February 18, 2010 at 2:05 PM

The Dister said…
Hmmmm. Too bad you didn't have a Canadian friend who could have COME OVER (ahem) to spend your birthday with you!

Next time Coop takes the girls for 5 freakin' days - you need to invite me over!!

Assuming you don't want to just hang out in your pj's all by yourself for the whole time.

Bullwinkle said…
I sooo want your cleaners. And your stripes. (But not your snow. I've got enough of my own, thankyouverymuch.) /sigh My cleaners not only canceled due to snow but they didn't try to make up the day.
February 21, 2010 at 8:32 AM