I have so much to blog about and so little time because, hello, I'm in the Olympics! Well, the KNITTING Olympics, that is.  My road to the competition has been a rocky one--a tale of false starts and frustration.  I WILL medal, though, and in the Knitting Olympics, the only medal is gold. "Do or do not do; there is no 'try.'" 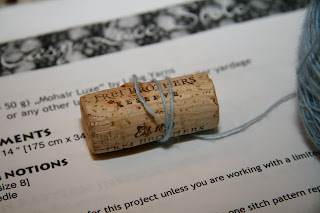 There is, however, doing very BADLY and thank you, that would be me. I've cast on five different times so far.  I chose an easy project because it's my first attempt at knitting lace. For knitting lace, you use yarn that is the same thickness as dental floss and you make these lovely, intricate patterns of ethereal snowflake-like fabric. 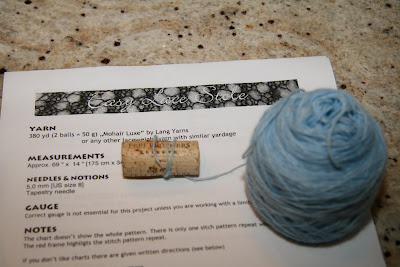 Unless you are doing what I'm doing-- which is to make a lot of mistakes and then say a lot of curse words that swirl about my head like a huge toxic cloud and give me a serious headache. I can't even rip this yarn out because it's so fine, so I have been cutting it off and throwing it in the fire. (The rest of the yarn LIVES IN FEAR.) Worst of all, I can't "read" my knitting the way I can with socks, because the lace is so...LACY.  I make mistakes on every row and sometimes I get plain lost because I get interrupted and then have no idea where I am in the pattern.

Still, you know what?  I'm going to finish.  And it will either have gotten a lot better and I will have a new knitting skill and passion OR I will hate it until the end and I will know not to do lace knitting ever again. 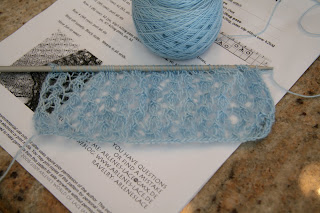 (Plus, well, this is supposed to be a STOLE.  I'm going to be seriously crabby if by the time I finish this thing, it will make a stole for an American Girl doll. Freaking lace knitting...)
On the subject of things that make me sulk (and curse,) yesterday was Valentine's day.  My sweetie did a good job with the flowers, it's not THAT. 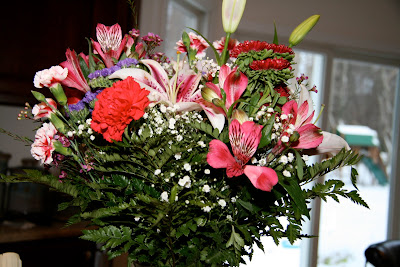 I made him socks.  Here is is, modeling them for the blog. Notice anything? 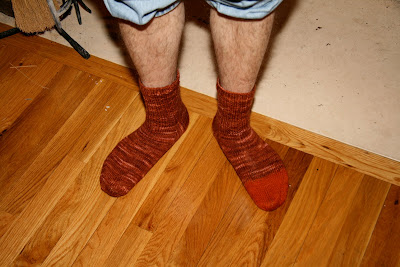 Why yes, that is a freaking ORANGE toe on one of them, thanks for asking.  Once again, I ran out of yarn right before the toe and when I ordered the same color, it came and was completely different.  BECAUSE I NEVER LEARN. The yarn (all of it) is Claudia Handpainted Yarn in "Copper Pennies."  I thought for sure that I had enough but I didn't and that's always a set up to fail when knitting with hand-painted yarn.  I wouldn't have ordered it if it had looked that orange on the photo, though.  I hate orange--except on cats.

(My spouse responded to the socks with his patented Grateful Spouse Genius.  "I think you should make all of your socks this way.  I think it should be the new style."  And then he slept in them, which I think means he liked them.)

(Speaking of orange cats, here's Thomas against the snow.  I don't know why this makes me laugh, but it does.) 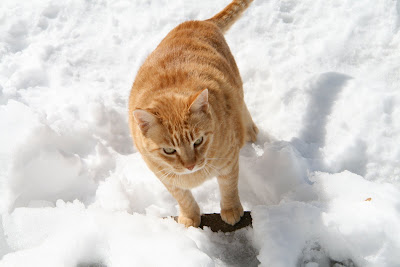 And speaking of snow, did I mention that we had a huge snowfall last week?  You know, while my spouse was out of town?  Here is a video from the first day which shows Puppy Austin trying to play with Scout. 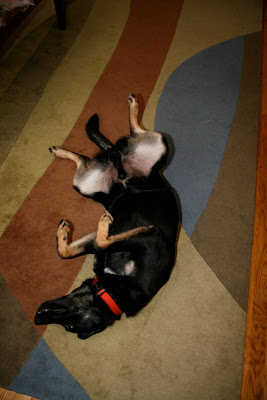 Speaking of the puppy, Sir Austin turned one year old on Valentine's Day.  He took it in stride. 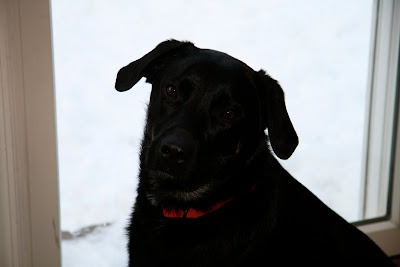 And now, gratuitous shots of my daughters in the snow.  If you aren't a grandparent, you might just want to go about your business now... 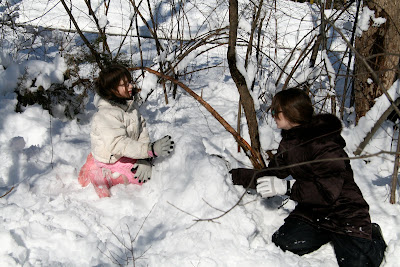 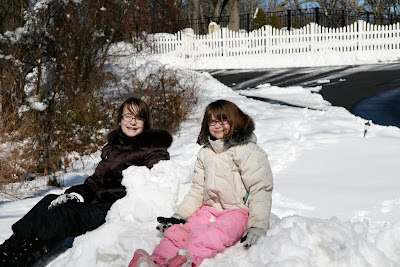 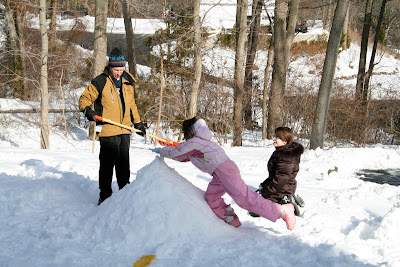 Here is Coop helping the girls build a snowman. He is somewhat hampered by the fact that Jane keeps diving onto the snow mound in order to assist in packing it down.
Email Post
Labels: A picture is Worth at Least Ten Words Austin cats humor knitting Knitting Olympics Scout Thomas WHAT? Doesn't everyone? Winter Wonderland yarn

Joni said…
Lifelines have saved many a lace project -- put them in frequently. And come and join the beginning lace knitters group on Ravelry. Lots of help if you have problems and commiseration when something goes wrong. I started knitting lace last spring and I'm now addicted.
February 16, 2010 at 9:54 AM

Sharon said…
Another trick for knitting lace, that I can't live wtihout, is to use markers for each pattern repeat. That way you know if you are off count right away. Sometimes it looks crazy to have so many markers but they have saved me more than a life line!
February 16, 2010 at 11:51 AM

Tiny Tyrant said…
All lace loos like crap until it's finished.

Use markers to denote pattern repeats. It makes it MUCH easy to keep track that way, and find missing/extra stitches, and PUT IN A LIFE LINE So you only have to rip back to the lifeline (and you can, the yarn will forgive you), and all the stitches can be picked by from the life line.

Anonymous said…
I love all your photos. Those flowers are beautiful. The girls are cute. The hairy legs, I mean socks, are cute! But the only photo that didn't show up was the cat. Darn.

ccr in MA said…
I'm so sorry to hear of your lace tribulations. I hope that the knitting fates stop messing with you soon.

And I know handpainted yarn is, well, handpainted and varies and all, but wow, that's some difference! Bet you'll buy more next time, yeah? :( Thank heavens Coop knows the right thing to say and do!
February 16, 2010 at 5:27 PM

Anonymous said…
Ahh, Thomas is showing up on the home computer. What a hambone!

Knitting Out Loud said…
My attitude about lace? Just knit through it, mistakes and all! You're learning! Good luck...and breathe!
February 17, 2010 at 7:20 AM

ToyLady said…
That puppy-snow thing is wearing me out! Mine does the same thing - even if I'm on the other end of the leash!

Janette Jones, Studio California said…
Hadn't tuned in to you lately...computer malfuntion, etc. and forgot how FUNNY you are...thanks for the laughs! You brighten my day....
February 17, 2010 at 12:16 PM

jenn said…
The knitted lace is beautiful! And take comfort in knowing that I can barely manage a (very, very simple) afghan pattern with quite thick yarn, let alone a project like that. You're a rock star!
February 17, 2010 at 3:56 PM

joannamauselina said…
Adorable kiddies, superlative cat, darling puppy (who reinforces the idea that I probably couldn't manage a puppy - at least without drugs for one or the other of us), fabulous and fabulously unique socks.
I have to start every lace project at least 10 times, and use lots of markers for the repeats. But it's worth it. Once you get going, it flows. Sometimes.
February 17, 2010 at 9:33 PM

Karen said…
Oh, I have a WONDERFUL side ache now from laughing at those wonderful socks! And you know what? I seriously - REALLY - think I am going to knit my next pair like that! I just love it! It would be like carrying a little private joke in my shoe where no one knows it's there but me.
February 19, 2010 at 7:14 PM