Lin got great news on Wednesday that her boy is going to be just fine. Thank you for your collective prayers and well wishes. I do believe they made a difference.

In other kid and life lesson news:

My resolution since we've been back from our trip to Texas, has been to plan a fun outing every day (or as often as I have energy/patience) to see something of Long Island. On Wednesday, I took the kids ice skating at a local park which has both a great pool AND an indoor ice rink. My kids love to skate. I don't have any pictures because my hands were so cold I couldn't work the buttons and also because I was busy trying not to stalk out on the ice and bang some heads together.

It was an interesting thing: the rink was filled with kids who A) could really, really ice skate (as opposed to the last time we went skating in New York, when my Texans were the best skaters on the ice) and B) either HAD or were DESTINED to do hard time.

Seriously. These kids were a tough, rough crowd.

My kids? Not so much with the rough and tough. Like, a HANGNAIL can torpedo our whole day.

But you should have seen them rise to the occasion. I was proud of them. Both girls got knocked about a fair amount and Jane fell several times. One girl said something mean to her but it did not even phase her. Both girls gained visible confidence as they skated around. By the end, they didn't want to leave.

This was a great lesson for me in how protecting my kids from everything that might be the slightest bit stressful (which is my normal M.O.) doesn't do much to prepare them to mix it up with the people from all walks of life with whom they will have to compete in later life. After all, as I tell them frequently, they do not come from family money. Bummer for them. But they are going to have to go out and earn a living just like everyone else, and this means dealing with angels AND thugs, and standing up for themselves so they don't get run right over.

So, then yesterday, I took the girls to the Long Island Children's Museum. We're almost too old for children's museums now, I fear, or maybe we've just been to so many of them that there's not too much new to see. But this one had some good things, like a climbing structure: 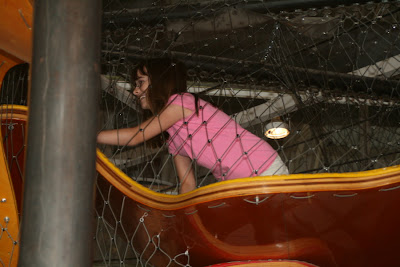 and this really cool bubble area where you could actually make a bubble around yourself. 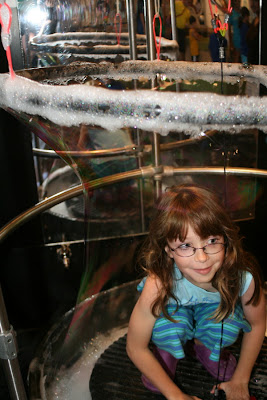 The girls had fun until we realized that Ana had lost her purse. She backtracked looking for it and then I saw an attendant carrying it, headed for the Lost and Found. Whew!

I know you're going to ask why a ten-year-old was carrying $40 with her, but see, ten-year-olds are tricky little animals, what with being all ten-going-on-thirty and wanting their own apartments and all. As much as we like for them to listen to our sage counsel, they rarely do.

I will never forget her face and her true anguish as it occurred to her that it might even have been another KID who stole it. There were a lot of camps on day-trips to the museum and some of them were camps aimed at exposing underprivileged kids to some culture. (I am not stereotyping. I know this because that's what their T-shirts said.)

I'm not saying it was one of those kids, just that there was a very different crowd than the normal museum-goers we've experienced. For example, Ana was standing patiently in line and another kid cut in front of her and when she protested, the camp COUNSELOR for that kid totally refused to do anything about it and looked at Ana like there was something wrong with her for even suggesting such a thing. Nice.

Anyway, Ana and I talked a lot about how blessed we are and how not everyone is so blessed--a lot of kids have probably never even HAD $40. We talked about how we can't let this event make us live in fear, because then the crooks win TWICE. We talked about how we approach life with the idea that because we're good people and try to do what is right, so does everyone else...and how that's not always the case.

She was SO upset. Less by the loss of the money than about the loss of something far more valuable: her sense of security and her trust that people are good and want the best for her.

She wanted to sleep with her bedroom door locked.

And just so you know that I am learning my own lessons about preconceived notions here in New York, after we left the museum, both kids were melting down and we had to pull into the first restaurant we saw. It turned out to not be kid-friendly, but my kids got something to eat and were very well-behaved (so well behaved that a couple sitting by us commented on it when we got up to leave.)

In the back of the restaurant was this long table with about twenty men seated around it, having lunch. I got very nervous--dudes, if I had seen anyone kissing anyone else's ring, I was so going to have my kids stop, drop and roll right out the door. I've seen The Godfather, know what I'm sayin'?

Of course, it turned out to be a group celebrating some guy's retirement.

And the complimenting couple? The man cut me off in traffic shortly thereafter and flipped me the bird when I honked.
Email Post
Labels: Ana growing up heartbreak I heart New York Life in the Modren World parenting The Great Cooper Move

I was thinking about the same thing yesterday while driving my eldest home from Mad Science camp, where it sounded like he had a little run-in with a boy who'd previously been friendly to him. Of course I wanted to drill him all about the incident and counsel him on how to handle it in the future and what to do better, etc, etc. and then I realized, he's growing up and these things happen and I can't always jump in and help him work it out, and I have to trust him to learn from it and NOT being permanently scarred.

What you've described is ordinary life in New York. Poor Ana yes, but next time, she'll leave her purse at home, or with you--it's just too easy to lose track of things when you're having a good time....and better to learn such things at the $40 stage than at the $15,000 stage, which I learned when my 2nd husband decided to run off without paying a cent on the bankruptcy that he helped create!

Wait a minute...how did I just make this MY problem...such a trigger!

The worst of it, is that all you can do is decide that there are just really no caring people out there, and smile and let it roll off your back--you never know if that driver that flipped you off didn't have a gun in his glove compartment!!!! YIKES! And to think that there are some people who chase after people who do this very thing--for instance, I had a girlfriend who flipped someone off, and the woman and her boyfriend followed her to the gas station, got out and proceeded to beat the crud out of her.

Blessed be Judge Judy, who awarded her $5000 for her trouble, not a cent of which came out of the perp's pocket, but I tell you what, that person literally crawled under the podium while Judge Judy literally nailed her and the boyfriend to the wall! There is something to be said for public humiliation. I'd be willing to bet that she ended up the laughing stock of the entire family for her behavior.
July 18, 2008 at 2:34 PM

ckh said…
What a coincidence! I was just going to write a post about being chased down this week after flipping the bird. Stay tuned!

There are far too many people out there who think they are normal but are completely off their rockers!