I'll Stop the World and Felt With You

This is SO a knitting post. I'm sorry if you were tuning in for something else because, dudes, fiber will out. I am powerless against the forces of good and increases. (Get it? Hahaha, I slay myself. Ah, me.)

This is also a total expose (how does one make that little symbol in html?) of my ever increasing knitting compulsion. Obsession. Obsessive-Compulsive Knitting Disorder. (DK, I think there ought to be an official diagnosis.)

Warning: this might get a bit long. But then you'll be done with the knitting. At least for a little while...

So, when last we left our intrepid heroine, she was about to embark on knitting her first sweater. She was finishing up a few projects on the needles...

Edward Socks (shown here with their namesake who would NOT cooperate.): 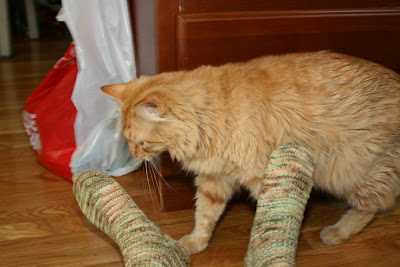 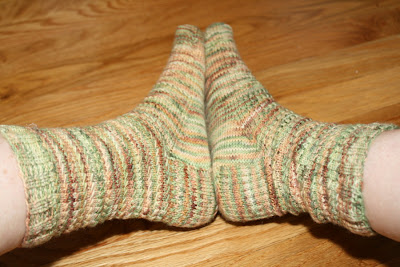 (Underneath the socks in these pictures, I have a big bandage on my foot so THAT'S why the socks look a little wonky. I SWEAR it's not the knitting. Look: 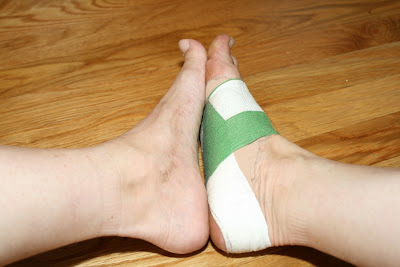 and while you're admiring the tape job, check out the really impressive scar on my left foot from my surgery.) 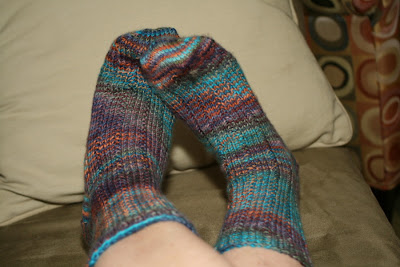 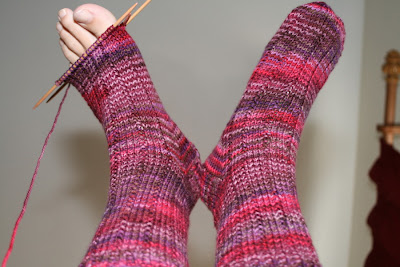 On which, of course, I ran out of yarn right at the toe. And, naturally, I cannot find any more Claudia Hand-painted yarn in Plumlicious. I've searched. 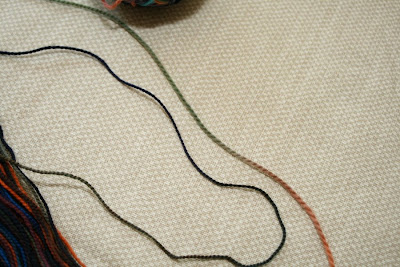 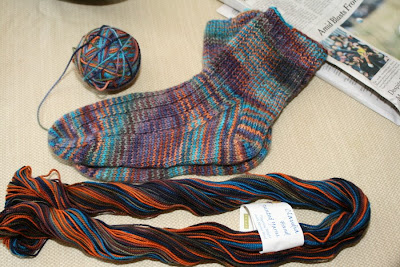 They are ALL supposed to be Claudia Hand-painted yarn in Spring Break. Only, they really aren't.

I asked why the stock of Claudia was down to nothing at Hill Country Weavers and the woman said that the quality had been so inconsistent that they just didn't want to carry it anymore.

But anyway, back to our Intrepid Knitter who was, when last we saw her, finishing stuff. (Yessss.)

While finishing up socks, I got kind of sidetracked knitting my girls these bags, remember? And felting them. And then suddenly, I wanted to felt EVERYTHING. No, seriously. I wanted to felt THE WORLD.

Remember that commercial from years back with that woman who wallpapers everything? Like, even the refrigerator? That's what I'd like to do with felting.

So, first I started making Lin a bag out of this yarn: 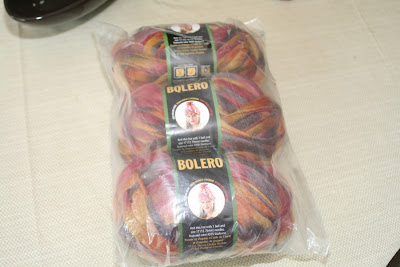 which I bought when I was first getting back into knitting and could not resist a good sale. It's so heavy, though, that about four skeins into it, I realized if I kept up the double stranding, it would weigh about sixty pounds when it was finished. So, I frogged it back and set about reknitting it with a single strand.

But while I was trying to decide what to do, I went to my local yarn store (any excuse at all) and bought some new yarn for Lin's bag. And I knitted it up. 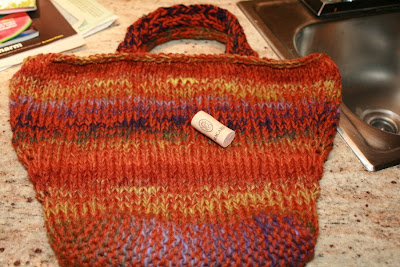 In one afternoon. I'm not kidding. From a pattern I MADE UP.

But when I felted it, it turned out smaller than expected. (My washing machine has some issues and the knobs don't actually point to the real cycle anymore so it could just have been that I felted it for too long.) 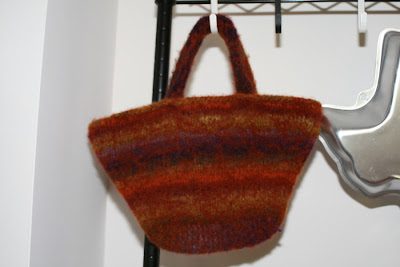 While I was trying to decide what to do about THAT, I knitted and felted a bowl out of left-over yarn. 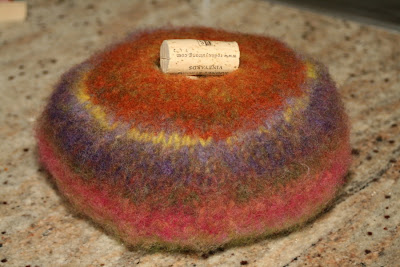 And I, um, made up THAT pattern, too.

I showed it to my husband. He looked slightly alarmed. After suggesting that I consider marketing my bowl as a Rastafarian hat for American Girl dolls (which totally made me giggle), he said, "You knitted a bowl?"

"From a pattern you made up?"

"So, you've taken this knitting thing to a new level, is that what you're telling me?"

Soonerbeknitting said…
I love your felted things, and yes, it is addicting. I am in the process of felting mice for my cats. Makes your bowl look pretty sane, doesn't it.

I bet your cats would like these though - I found the pattern in Kitty Knits.

Although this is my first comment, I have been reading your blog for a few months now. I really enjoy your writing.
July 21, 2008 at 1:17 PM

Suburban Correspondent said…
You think you're crazy? I make up patterns, also - because (get this) I'm afraid I won't be able to figure out the directions on a real pattern. And then I would get frustrated. So instead I make it up as I go along and end up frogging back 3 times because the sock isn't fitting right and I end up (you guessed it) frustrated.
July 21, 2008 at 1:39 PM

knittergran said…
The socks are truly gorgeous-I wish there was a way to fondle them over the internet!
And you are so brave-I could NEVER make up a pattern. The bowl reminds me of one I bought in NM; it was made by a native American, and held seeds. The opening was small so that rodents couldn't get to the seeds. So you've made an art piece!!!
July 21, 2008 at 1:54 PM

MadMad said…
You know what will end your felting bug in a hurry? (And take it from me, someone who was so enamored of the whole thing she started a business making and selling felted handbags...) The $400 washing machine repair bill...

Anonymous said…
I ended up ripping out almost a whole knee sock yesterday because I ran out two inches from the end. Today I spent hours searching for a pattern that is really clear in my memory and it's not THERE. So I've started making it up as I go along. Taking notes, hopefully. Wish me luck.
July 21, 2008 at 3:34 PM

Ei said…
I know I'm really not supposed to comment on knitting blogs. I'm not in that club. But no toe? Man, I'm bummed.

JJ said…
Barb! eBay has the yarn you ran out of...

I'll be sure to suggest OCKD for the DSM-V.

I love me a felted bowl. Best felting tip I've picked up, though? Use a fine mesh lingerie bag. Cuts down on the fuzz.

The Claudia looks like the kind of stuff we used to get all the time at the shop, where we'd hold up the new dye lots against the older stuff and go, wha? Any hand-dyed brand in particular, you have to stick with the same dye lot.
July 21, 2008 at 7:45 PM

Lizabeth Cain said…
Grrr... Claudia's is just not enough yarn for most of the socks I make. It bugs me that the yarn is so expensive, and then there's not even enough of it. Probably doesn't help that my feet are extra long...
July 21, 2008 at 9:20 PM

Sherry Sea from Austin said…
I've loved both these latest posts (but I like 'em all). Anyway, I noticed, too, that there wasn't much Claudia at Hill Country Weavers. If I'd had the nouse to ask the shopkeepers what was up, I would have bought that last skein of Clown. But I'd fallen in love with some hand-dyed Welsh wool and since we lived in Wales a long time ago, I felt it calling to me . . .
July 22, 2008 at 8:13 AM

Mokihana said…
Fabulous socks, esp the Edward ones. I have a soft spot in my heart for anything Edward.