So, last night, on our weekly Date Night to Queens to have a doctor shove something resembling a sewage pipe into my foot (Dudes--I'm not even exaggerating (much). I woke up at 2:00 AM and it was STILL bleeding!) I got some really bad news about my foot --the one I had reconstructed and fused and screws installed last year? Really. Bad. News. Such bad news that I don't think I can talk about it for a while. Because today, when I told Lin what the doctor said? I started to cry.

And after we'd had horrible things done to my foot in the doctor's office and had gone to dinner (where we got a $35 parking ticket because apparently, you have to feed the meters in Queens until 10PM but the signage does not actually SAY that), my husband and I repeated the second part of our weekly date night routine, which was to bottom out blood sugar-wise and to start talking about chucking it all and moving back to Austin. (In between my threats to throttle our waitress and go MAKE THE FREAKING FOOD MYSELF.)

We needed some crackers.

Because we are NOT moving back to Austin and do you know why? 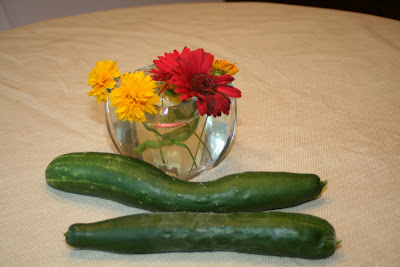 Let's see, there was the moment I heard that legislation resulting from the childhood hunger study I directed in Texas would feed an additional 500,000 hungry kids in the summer time.

And there was the birth of my children --both births.

There was the moment I held my book in my hands for the first time.

There was my first sock knitted.

And now: feeding my family with produce from my garden. 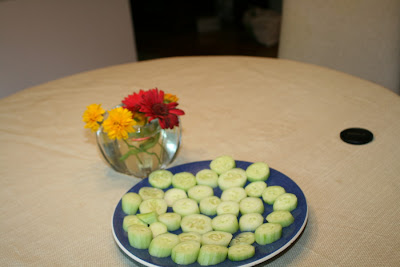 Oh, and the flowers? Also from my garden. But I am NOT gloating, I promise.

Barb Matijevich said…
Cucumbers and more cucumbers. I am impressed with the ability to grow things on Long Island but I'm thinking maybe it's not really a BANANA growing kind of place...
July 2, 2008 at 9:45 PM

Suburban Correspondent said…
If you could please tell us you are not going to "lose" your foot, I think we would all be a teensy bit relieved. Please?
July 2, 2008 at 10:07 PM

DK said…
Those are some seriously huge cucumbers. Cool!

TheOneTrueSue said…
It IS so satisfying to eat food you've grown yourself.

And oh dear, I'm so sorry about the troubles with your foot...

Tenna Draper said…
Sorry--was on the laptop, which doesn't really have the most wonderful video card...know what I mean?

The banana bit was

Because yes, I know that you don't have a banana tree in your backyard, but I'm like most kids who look at the pictures instead of reading the narrative so closely...but sort of a play on the joke---is that a banana in your pocket?

But, oh. Your foot! Poor you. I know that may sound pathetic and condescending, but having just been through the Shoulder Ordeal and the Burn Ordeal I am just so empathetic to anyone who is suffering from anything. Even a hang nail. I swear. (I just learned how to do italics, so I am doing it a lot).

I fully believe that we do not say "poor me" to ourselves enough. Of course it wouldn't be healthy to be a constant mantra. But a least enough to acknowledge something totally sucks.

hokgardner said…
Count yourself lucky. Our entire garden here in Austin has turned brown and crispy.

Miri said…
IS YOUR FOOT OKAY?

Yeah, I know you said you didn't want to talk about your foot. But oh, I hope it's going to be okay. Like, the doctor could call back and say, "so sorry to have freaked you out, my screen resolution was bad." Cool as a cucumber.
July 3, 2008 at 10:28 AM

Sherry Sea from Austin said…
I try to put myself in your position, Barbara, and I know that no amount of hopeful chat is going to help for awhile. I know that the only exercise I ever really stuck with is exercise that involves the outdoors. Stair-steppers, elliptical trainers and indoor bikes have all gathered dust for me. If I got the Message from God: "Forget about those walks on the English Moors and those bike rides round the Blanco hills", I'd probably get a cabin by a lake and start rowing every day.

But gardening's good, too! Perhaps you'll still be able to get a shovel into the soil? That's not an essential part of gardening (you can get a teenager for that) and in Long Island, the soil's a lot softer than the soil in Central Texas, where, as you know, it's just rocks connected by the free-form bricks we call 'dirt'.
July 3, 2008 at 5:05 PM