This blog post is a public service announcement to serve as a cautionary reminder to all of you who are thinking about getting a new puppy. (Maybe I forgot to mention that we had adopted one?)

Today's lesson is in contrast and comparison. 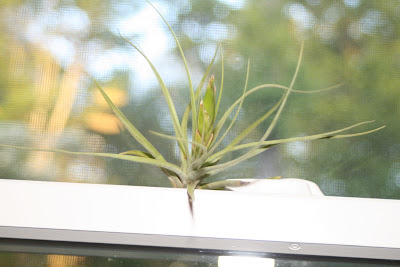 This is called an Air Plant. Well, it has some scientific name but I call it an air plant because it needs only AIR. No watering, no food --it sits on my window sill and requires NOTHING of me.

And now, see this? 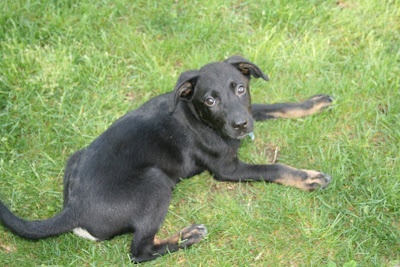 Here's a nightly routine: At 3:00 IN THE MORNING, I am awakened from my cuddle with Edward because the puppy is crying. He's housebroken but he's still only 13 weeks old so he can't make it all the way through the night.

I stumble downstairs, not always literally but I don't have shoes on and the whole walking thing only works well for me if I am wearing my running shoes with the orthotics in them. (Which limits my fashion footwear, true, but let me just say: mobility cannot be rated highly enough.)

Anyway, I reach the crate where the puppy is bouncing around as much as he can, given that he really has to pee. I let him out from the crate, fend off his jumps by hissing the word, "OFF!" and side-stepping. Meanwhile, Scout, who has been sleeping in the room where the puppy's crate is, runs to the back door, barking.

Great. So much for not waking up the house.

The barking also summons Thomas, who would really like to go outside and decimate the baby bunny population. There aren't any coyotes in the woods behind our house, like there were in Austin, but there is at least one fox. I would probably bet on Thomas, were there to be a confrontation between the two (just given his girth) but I really don't want to test out my theory. 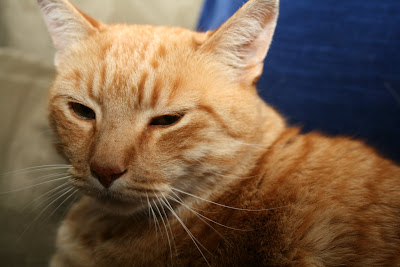 Through some sort of gymnastics move, I manage to let Scout and Austin out, while keeping Thomas inside. As I am shoving Thomas back in, Austin squirms back inside because he doesn't want to go outside without me! I might miss all the fun! I assist him gently outside with my foot, while intervening between Thomas and the door and then manage to get myself outside, too.

In my bare feet and nightgown. It's maybe not a GOOD look for me but it's THREE O'CLOCK IN THE MORNING, not that I'm BITTER.

Austin finishes his business first (smaller bladder) and rushes back to the door. I am hissing at Scout to COME ON when I realize that he, um, has additional business to do. The the puppy remembers that Oh! Yeah! He does, too!

I'm freezing and those (no-see-um) bugs are biting me and Thomas is sitting on the inside of the glass door, narrowing his eyes at me. (I used to let the puppy in when he was ready and then wait for Scout but then Austin would cry to come! Back out! Where the people are! And that meant opening the door one more time and fighting with Thomas all over again. Eventually, I learned. It's hard to learn lessons at 3:00 IN THE MORNING.) Finally, everyone is ready to go inside and we do a reverse of the initial fight to get everyone out (but not Thomas.)

Then I have to pick Austin up, put him in his crate where he begins to cry piteously until I can go corral Scout and make him go back into the Pygmy Maid's Room to babysit.

At 5:00 IN THE MORNING, we lather, rinse and repeat, except for the going back to bed part.

Well, ACTUALLY, after I've drank (drunk?) almost the entire pot of coffee, Austin does this: 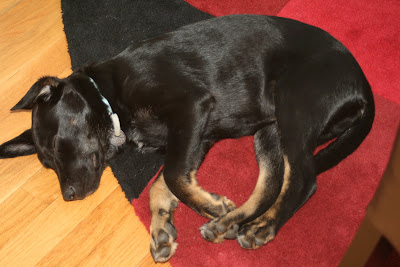 Right at about 6:45 when the rest of the house is getting up.

Well, SOME of the house is getting up. 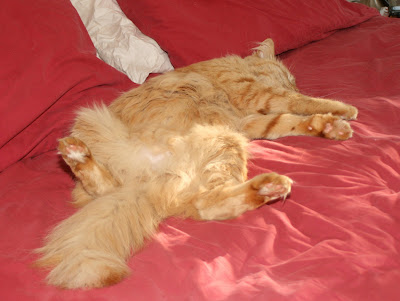 (And yes, I'd do it again in a heartbeat. Tonight, actually.)
Email Post
Labels: Austin coffee Happily Ever After humor? pets Scout sleeping the Glamah of it All Thomas

Tiny Tyrant said…
Lol. When I first got Cliff the Mutt (many moons ago) his time was 2 am.

otter said…
it's worth every darn minute of it too isn't it? So glad to read how much you are enjoying the new puppy, it heals a bruised heart when you love an animal (or a kid they say, but I don't have any of those). Keep posting the doggy pics please!
May 21, 2009 at 1:24 PM

MadMad said…
I kept waiting for something to happen to the air plant! Was he going to eat it? Were you going to step on it on your way down the stairs? But I get it, now. Silly me! And oh, the joys of puppydom. But just so you know... they're NEVER as good as air plants!
May 21, 2009 at 4:49 PM

Bullwinkle said…
I shall think good thoughts for you tonight, when I am escorting the two kittens to the basement. At 2:30ish.

Rhonda from Baddeck said…
Aren't you glad you waited until nice weather before getting a puppy who needs a 3am trip outside?
May 22, 2009 at 1:41 PM