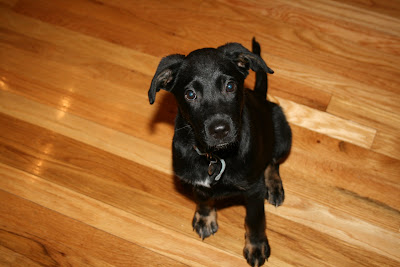 So, you forget a lot between puppies. In fact, it's exactly like bringing home a new baby. I remember when we first brought Jane (our second daughter) home, I turned to my husband and said, "Have we ever even SEEN a baby before? Because I don't remember anything about babies."

I wrote a column about adding a second child once. If y'all want to go read that now, that'd be great because Austin is eating my kitchen rug and I need to go distract him. 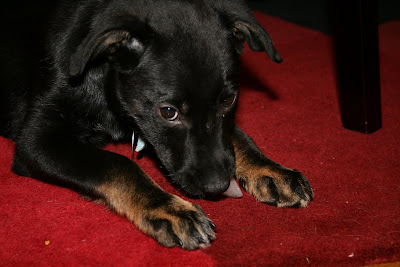 We'd begun looking for a puppy. I honestly wasn't sure I was ready --I still miss my Sydney so much. My husband told me that we would NEVER be ready and he actually started sending me websites with links to dogs and asking if maybe I wanted to go look at some dogs and he kept talking about puppies.

We had gone to a shelter in Glen Cove and looked at this adorable puppy but there was something just not right. I left there oddly depressed and wondering again if I was ready. Maybe it was still too soon.

But Coop kept sending me links and then he suggested I go visit another place and if I found a dog I liked, he and the kids could go get it on Saturday.

So, Friday morning, I went to visit the North Shore Animal League, which is the largest no-kill shelter in the world, according to its website. I walked in and met this shepherd/doberman mix who was really spunky and had this one deformed and half-missing ear.

I am a sucker for that kind of imperfection.

I called my husband because the volunteers all said that if we wanted him, we shouldn't wait until the next day because the puppies at the shelter always went really fast. We decided we needed a puppy because we have the two cats and it's impossible to tell how an older dog will react to cats until you're introducing them and then, you know, it's too late.

My husband, however, had a really fun day of meetings punctuated by conference calls with the odd teamwork, human resources issue thrown in. Nevertheless, he dropped everything and made it to the shelter within about an hour. I hung out in the puppy room and the more I observed my little mangled-ear friend, the more I questioned whether he wasn't the exact same kind of crazy that our cow dog, SCOUT, is. I mean, all the other puppies settled down and napped (all at the same time, actually. It was very cute.) But the puppy I was watching never napped. Not once. And he, um, kind of barked incessantly.

After Coop arrived, he and I talked about the fact that we already have ONE high-strung, neurotic, special needs pet and that maybe the introduction of another would really send us all over the edge. "Barb? I feel like I should say this but don't get mad. You HATE that Scout barks all the time."

While I'd been hanging out with the dogs, though, I'd noticed this other puppy in the crate above my mangled-ear friend. And he was ADORABLE. He was also a shepherd mix but it was pretty clear to me that he had a lot of Lab in him and my experience with Labs has been that they aren't always smart. The big lesson we learned from getting Scout is that intelligence is really important to us in our pets. (Well, in our DOGS. Our cats may be little rocket scientists but they never let on as it is not in their own self-interest. Because we might want to TRAIN them or something.) I was shocked when Coop held that little dog and started saying things like, "Well, you know, Labs are such NICE dogs and it'd be a great thing to have a nice, happy dog." And, "The simple fact of having TWO dogs will act as a deterrent to most would-be burglars."

I had to leave at this point to go pick up Ana from school on time. Coop, despite his day and the stress involved and the long application process (I think they checked references back to birth) adopted our new puppy and brought him home.

He called me from the car. "I was going to go back to work but I don't even have a leash or a crate or anything to contain him so I'm going to bring him home. But Barb, I think we got the exact right puppy. I put him in the back and after a while, he climbed up into my lap and just sat there, looking out the window. I think we may have gotten lucky with this one." 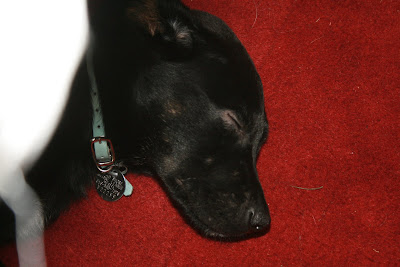 I already love him so much.

(More about the girls' reaction to him, how he got his name, how the other pets reacted (oy) and that adorable puppy belly tomorrow.)
Email Post
Labels: A picture is Worth at Least Ten Words Austin Coop dogs Happily Ever After My Personal Fairy Tale pets

hollygee said…
Last fall we adopted a one-year old cat. After years of having geriatric and downright elderly cats, having a young thing in the house is like spring coming. Sure there are the allergies (in spring, not to cats), but the blooming makes up for them. And this sweet young cat was the right choice of the two I was considering. I think you've made the right choice, too.
May 9, 2009 at 11:19 AM

Tiffany said…
What a face! I'm sure you won't be around to read this for a while, since you're probably quite busy watching him look quizzically at you, then walk around the room on those big paws, then sleep, then cock his head...

Susan said…
I have a soft spot in my heart for labs. The dog my family had when I was a toddler was a lab and she was a dear thing. I don't think you'll regret this choice. He's adorable. And my sheltie Austin wants you to know that Austin is a great name for a dog.
May 9, 2009 at 2:52 PM

Mary Ellen said…
I'm sure the chewed furniture and sleepless nights will pale in comparison to the sweet puppy love. He's gorgeous. Congrats!
May 9, 2009 at 5:33 PM

DK said…
I'll say it again...ohh. He's just so sweet. And I love that gangly puppiness.

Karen said…
I adore Austin, but my favorite part of this post is Coop.

We adopted a young "lab mix" from the shelter about a year ago, and for us, too, it was the perfect match.

otter said…
What a cutie! Looks like you guys picked a good one!
Um... watch him for even the slightest cough, North Shore is notorious for kennel cough (with that many dogs there really isn't any way for them to prevent it). it's easy to treat if the little cutie did pick it up though.
May 11, 2009 at 9:06 AM