Falling Down (and Other Life Lessons)

I'm currently taking a web seminar based on Brené Brown's book The Gifts of Imperfection.

It's not going all that well, actually.  I can't seem to get out of my head, which, lets face it, has a significant raspberry-blowing, snarky, cynical, show-me-the-money side. For example, on Wednesday, the first exercise we were invited to do involved writing ourselves letters from our wisest and kindest older self.

"Imagine the oldest, wisest and most kind version of you is sitting down at a desk to write you a letter of encouragement. What would the Kind You say? What permission would be given? Hold this image in your mind, then pull out a piece of paper."

I still have not done this.

Because my BRAIN thinks this is one of those new-agey, touchy-feely, ridiculous exercises in narcissism.

My heart is sort of, kind of, very gently offering up some phrases I might use --in odd moments when my brain's not looking.  Things like, "kinder to yourself" and "slow down and take some time to breathe," and  "figure out what you're really feeling, and ask if you're letting yourself feel that, or if you think there is some other way you're SUPPOSED to feel."

And then the clincher: "Maybe you need to get out of your head for a little while and explore the longing you have to connect with the world in a different way."

So, last Friday, on my way to yoga, I hit a patch of black ice in my driveway, and I fell down in quite a spectacular way.

Black ice is new to me --we didn't have it in my part of Texas.  It LOOKS just like wet pavement but it's ICE. And in the case of MY spot of black ice, it's caused by the run-off from the roof falling onto the pavement and washing away the ice melt and salt that would ordinarily be a good defense. Then it refreezes and lies there, just waiting for me to come out.

It didn't help my ego to know that this was the same exact patch of ice that my older daughter Ana fell on the night before, and that I didn't learn from her fall.

So, then, on Sunday?  When I fell AGAIN on the same (censored) patch of ice, this time really banging the heck out of my knee so that going to yoga is now in question?

Then I REALLY felt inept and stupid and graceless and all kind of other negative things that my brain kept offering up.

But my heart?  My heart said to me, "OUCH!  Let's get you an ice-pack, sweetheart. Don't you dare feel embarrassed about falling.  Everyone falls.  But, as long as we're talking...um...maybe there is a lesson here.  Maybe if you continue to do the same things in exactly the same manner, you are destined to fall down a lot.  Maybe you...I'm just saying...have to address that patch of ice. Because if it goes unaddressed, it might stop you from doing what you really want to do.  In this case, I'm talking about going to yoga. I'll let you think about any other implications, because you're really smart." 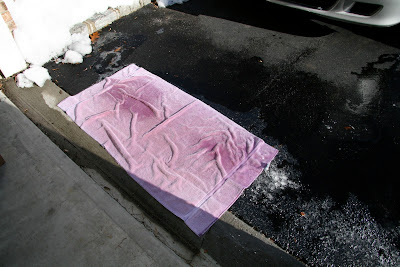 Deep breath.  And okay, then:

The Dister said…
Well, if it makes you feel any better (and it's meant to) I fall down ALL. THE. TIME. For no good reason. Last time was at an outdoor Christmas Market thing, during the week before Christmas. I had a shopping bag in my hand and am SO experienced at falling that I was able to swing the bag up and over the barricade that I was falling into so that the new, delicate, wooden nutcracker I had just bought barely even jiggled in the bag. Jessic was with me and try as I might, I couldn't keep the tears from falling. The bruise on my knee? Still there.

Sarah said…
((((HUGS))))
I think we need to be gentle with ourselves. We don't learn perfectly the first time, and ihmo there's a reason for it. If we were to do so, we'd be hyperalert at all times. "Whoa, I came close to that mailbox. I have to watch for every mailbox ever, and be sure I don't come close to it." Kind of like NASA in the 70s and 80s, they always became hyperalert over anything that had caused a problem, and their processes became so onerous, they couldn't do anything. We do need to filter, and sometimes it takes a few times of something happening to realize we need an alert there. I do expect you have a "black ice" alert in operation now. Don't beat yourself up...you have a mission in life, and number one part of that is NOT "avoid black ice at all costs." (I'm selfish enough to think it's "blog for all of us")
January 17, 2011 at 12:23 PM

Margie B. said…
"figure out what you're really feeling, and ask if you're letting yourself feel that, or if you think there is some other way you're SUPPOSED to feel."

Cheri said…
I don't know if I'm just seeing things, but is that a little red heart in the middle of your nasty black ice patch? Maybe that patch really was put there to let you learn this lesson from the heart.

And if it makes you feel any better, I haven't done the letter yet either. My excuse is that I'm too busy. But I'm sure if I examined it closer I'd find my head is making faces at my heart too!
January 17, 2011 at 2:05 PM

bethany said…
"Because my BRAIN thinks this is one of those new-agey, touchy-feely, ridiculous exercises in narcissism." i have that brain too. and also have an exercise from my Reinventing Your Life book,to do, still lurking in my guilty list of can't-face-it things. despite the fact that the book is wonderful, has made me realize umpteen things about why i do the things i do, but I still can't take the last step and put kind words to myself down on paper. thx for sharing your thoughts, they've jogged mine. may the writing get easier!
January 17, 2011 at 2:36 PM

Kimos said…
I had one of those new-agey things. I was at a women's retreat and we were supposed to write Letters FROM God. You write a letter TO God and then turn the paper over and write what you 'hear' back. I'd heard about people doing this and my snarky self said that people just told themselves what they wanted to hear.

But I figured I was there and it wouldn't hurt to hear what I wanted to tell myself. So I wrote the letter, turned the paper over and wrote everything that came into my head as quickly as I could. At the end, I heard, "Say Hi to Kathy." Idiotic, right? But I was writing so I wrote it and then went out to the restroom. Kathy had found a table outside, so when I passed, I told her that God said Hi! You know, letters from God? He said to tell you hi.

We went back in and Kathy asked if she could share. I still thought this was one of the dumbest exercises I'd ever done at a retreat so shrugged, Share away.

So Kathy shares. She was sitting outside feeling blocked and miserable and finally just prayed that somehow she could know he cared. I guess God really did say hi. And I re-read my letter.

Shaatzie said…
This is one of the finest blogs you have ever written, and it really was from the heart. Black ice lurks in all of our lives, I think, and we seldom learn from others experiences. Our head is always off somewhere else...so now that you know, personally, from experience you can rest assured that the lesson is learned.
But may be learned again. Lessons sometimes come back in another disguise, but your friends are all waiting for your "Hi" from God, and blessed to have you in their lives.
January 17, 2011 at 6:18 PM

Tenna Draper said…
Hi Barb. Just a note to let you know that you are a caring, sensitive person who's an exceptional knitter. You should know that my own therapist tells me that knitters use both sides of their brain (right and left), which means that they are probably smarter than the average Joe Blow and also have bigger skulls to accommodate the extra brain-age. I know this to be true. My own skull is 23". My husband's? Only 21". Nuff said?

Seriously, though, anybody can fall on black ice. At least you didn't land flat on your butt like I did and cry for half an hour from embarrassment! The only fix is rock salt, but you can put regular table salt on it. Sand works too...and will give you a little extra "traction", and with the FULF, you could probably use the extra.

Nobody expects you to be perfect. God allows us to fall now and then. It's part of life. Expecting perfection of yourself is as damaging as someone saying something mean about you. Would you expect perfection from anybody else? I doubt it. So why expect it from yourself? Frankly, my husband expects perfection of himself and he's got a problem with depression because he can't live up to his own standards.

Which leads me to a second thought....

There is only one yardstick by which we should measure ourselves, and it doesn't exist in anyone else or in ourselves. We fall far short of that standard..ALL OF US.

My first response to reading was "even Janet falls". But you don't know Janet - so just know that watching Janet actually fall was one of the most Real Experiences of my Entire life.

(Also scariest: if Janet gets hurt what am I gonna do with 1 hurt human and all 10 dogs???)

There's a reason it's called an "exercise". You're exercising your brain, trying to retrain it to give you more peaceful/helpful/kinder messages (or whatever). Your brain is a muscle too. Letters to yourself are like yoga for your brain.
January 18, 2011 at 7:05 AM