Lessons from the Breaking of Boards

Last night, both of my daughters promoted to higher belts in Tae Kwon Do.

Jane (10) had her first belt promotion--going from white belt to yellow belt. This was Ana's (12.85) third promotion--going from orange belt to green.  Both girls did amazing jobs, conquering their fears and breaking boards and, in general, exuding the self-confidence earned when you give something your best effort.

I must digress to tell a little Jane story. (Sue me.)  Jane was terrified of the belt promotion ceremony.  She really didn't want to go. She was afraid she wouldn't be able to break the board and that she'd be embarrassed in front of everyone. She was in tears before we went --and, you know, Jane pretty much eats nails for breakfast, so this was unusual.  During the ceremony, as the time grew closer, she got more and more tense--it was almost palpable.


My husband and I watched her and worried and hoped we were doing the right thing by making her go through with it.  At one point, he leaned over to me and said, "I thought about telling her that the way the instructor holds the board --kind of pulling it or pushing it --helps the kids break it."  I said, "For goodness' sake, we can't tell her THAT!"  He said, "No, I know, I just thought about it, though, to try to ease her mind a little."

Jane stood up and the instructor talked her through how the process worked: Jane was to do two practice swings and then give it her all and break the board. 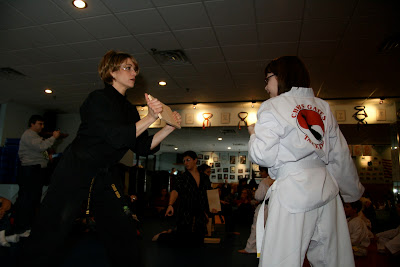 She broke it on the second practice swing!  I didn't even get a picture of it because I wasn't ready!  The instructor was a bit dumbfounded because she wasn't anticipating that, either.

Later, when we were congratulating Jane on facing her fears so spectacularly and breaking the board before anyone even expected her to do so,  Jane said, "You know, the instructors hold the board to put tension on it so it's easier to break.  I didn't want any help." 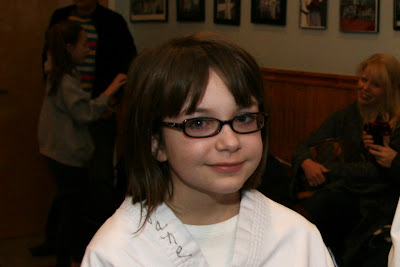 Classic Jane.  Just...classic.  (I learn something from her every single day.)

After the belt promotion ceremonies....no, no, wait, now I have to tell a story about Ana because Ana had a board-breaking moment, too.  She was to do it using a hand strike called a "neck attack."  (The first time I heard an instructor call it a "neck attack," I thought that she was saying some sort of glamorous Korean word, "nekattak."  Turns out, it was English.  Neck attack.  Ah.)  The first time Ana hit the board, the board didn't break. 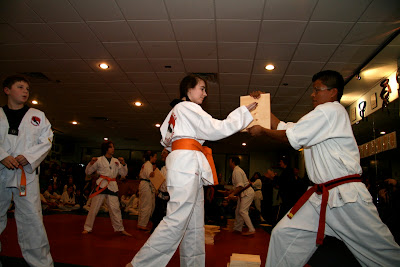 She did bruise the holy heck out of her hand, though.

She tried again two more times until she had tears in her eyes from the pain.  Then she asked if she could hit it with a hammer strike (also English and means, um, strike it like a hammer) and, y'all, she broke that sucker smack in two. 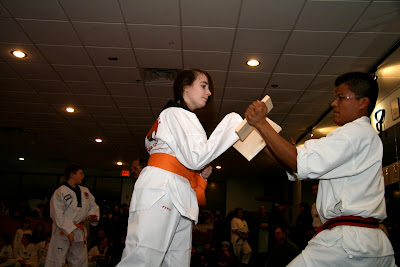 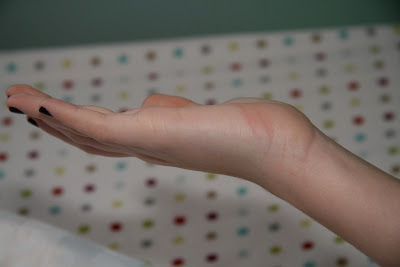 (I wouldn't mess with either one of my girls, frankly.)  (And no, I'm not one bit proud of them.)

Okay, NOW to the point of this blog post.  Because I have one, really, besides just bragging about my children.

After the belt promotions, there was an exhibition by these three teenagers who had earned their second degree black-belts. Each of these young men has been attending the school for about ten years and the level of excellence they displayed was truly breathtaking. In addition to their expertise in Tae Kwon Do, the boys sparred, and then they did some Jujitsu. It was a really impressive display, followed by each young man saying a few words of thanks and inspiration to the audience.

I spend a lot of time at the Tae Kwon Do school. I've written before about what a special place it is so I don't mind hanging out there one bit.  Both of my girls take lessons there twice a week and I take yoga there at least three times per week (and would go more often if I could.) (I joked with the owner the other day that I'm getting to be as much of a fixture as the much-maligned yoga frog.) (If people start stopping by to rub my belly for good luck, though, I'm outta there.)

Anyway, the messages across the curriculum are consistent: discipline, perseverance, respect, intensity, excellence. (And for me, a little added message about PATIENCE.)  The school starts talking to the students about these things in the Tiny Tiger classes and the messages continue throughout a student's career at the school.

Seeing those second degree black belts, something clicked inside me.  Those guys spent many thousands of hours working on those belts.  They have a passion for the art, true, but they still had to put in the time and the dedication--the (dare I say it?) perseverance and discipline to achieve their goals.

I think that maybe this was a message I needed to hear, especially right now.  I have this idea rolling around in my head (apparently knocking me off balance) for a new book but I haven't...well, DONE anything about it.  Haven't written one word.  Not one outline. Haven't so much as named the characters. I guess I've been expecting to be sprinkled with magic pixie dust and to emerge with a fully written novel in my hands or something.

Maybe it's that because writing is my passion, I expect it to be EASY.  But it's not easy.  It's never easy-- I am not one of those writers. I have a friend who writes so fluidly and naturally that the words seem to just fall onto the page and require little editing.  That would not be me.  I'm more from the "gnashing my teeth, struggling for the phrases, go back and delete it all, begin again and then, sometimes, walk into a wall clock to REALLY knock the words out of me" school of writing.  It's hard work and it takes (hello!) determination and discipline and perseverance to achieve my goals. Even this blog post took me a long time and a significant amount of angst and chocolate.

I didn't have to break any boards, though.
Email Post
Labels: A picture is Worth at Least Ten Words Ana discipline Everywhere Are Signs parenting perspective The Jane Cooper Experience writing yoga

hollygee said…
Oh Sweetie,
I'm not a writer. I tried it and found that I wanted my protagonist to stay safe and comfy. For some reason there didn't seem to be a story there.

But I'm friends with lotsa lotsa writers. Every one of them go through the "Who the hell told me I could write?" stage with every single book. These are NYT list writers.

Mokihana said…
What a wonderful post! The girls did such a great job, and your thoughts and photos were wonderful.

I call myself a writer, but am I one? The jury is still out. If I write, does that make me one?

I think it's exciting that you're thinking of a new book, even if it comes with weeping, wailing, and gnashing of teeth.
January 22, 2011 at 2:25 PM

Lynn said…
Mes deux centimes, in the form of a (few) question(s). When you knit, are you a product knitter, or a process knitter? When you cook, do you want food on the table, or do you like putting in a little of this and a little of that?

I had an aunt who ironed her sheets, because it gave her pleasure. I enjoy pressing seams if I am making a quilt top, but not when I have a stack of freshly-laundered shirts that need a little help.

When I was rearing a houseful of girls on very little money, cooking meant getting everybody full as quickly and cheaply as possible, so I could get back to things that did not make me feel frustrated.

For me, ironing and cooking are primarily "product" activities. And sewing, which I mostly enjoy, has also been mostly about the end product.

Knitting, however, and writing, and quilting, and cross-stitch, and watercolor and... ? Process. Every blessed time.

Maybe you are a "product" writer. Nothing wrong with that. Just know that whatever kind of writer you are, whether you enjoy the process, what we see here is good. And you should keep doing it.
January 22, 2011 at 3:53 PM

Anonymous said…
The research on expert knowledge indicates that something in the range of ten thousand hours is required to achieve expertise. For some folks it comes easier, but not huge amounts easier. They still approach the ten thousand hours.
January 22, 2011 at 4:13 PM

joannamauselina said…
Congratulations to both your adorable girls!
January 22, 2011 at 4:31 PM

Unknown said…
At my karate dojo we have 5 points we stress: attendance, focus, effort, patience and perseverance. I needed to learn the patience one when I started too.

Marion Gropen said…
Congratulations to your girls. Pushing through pain and fear are incredibly difficult to learn, and incredibly important during the most difficult parts of life.

And as a mom, I can sympathize with the courage and self-control it took for you to sit there and let them do it, so kudos to you, too.


The most important part of being an effective writer: the number of hours you spend with fingers to keyboard TRYING to write.

Looking forward to hearing some chapter counts. You've got a built in feed-back and cheering section here. That's useful -- so why not use it?
January 22, 2011 at 10:39 PM

Lisa said…
I just read that Annie Proulx didn't write her first book until she was 50 and she just published a memoir-esque book that might shed some light, or not! I also just read that there's a blogger (on blogspot) in NYC called the Homesick Texan... check her out! Your a great writer and have important things to say... keep doing what you love.
January 23, 2011 at 11:01 AM

Lomagirl said…
I read these last two posts backwards, and my question is- do you think maybe this book is the next big thing?
Hope you can stop falling down if it is.
(I feel like I should enroll my kids in a program like this after reading this.)
January 24, 2011 at 2:42 PM