My Canadian friend Kathy read a bunch of my Facebook posts on Wednesday and commented, "Man, and I thought CANADIANS talked a lot about the weather!"
She's totally correct.

I am SLIGHTLY obsessed with the snow and we had a huge snowfall on Wednesday.

Most of my friends in New York are DONE with the snow, thank you. They've seen it, they've lived it, they've shoveled it and now they would like for it to go.  I'm more in the, "Oh my gosh!  It's so pretty!  Look at how funny the dogs are in it! Glad I filled the bird feeders!  Look at the size of those flakes! Look at HOW MUCH snow there is!  Look at ALL OF THAT SNOW!" phase. I know it will probably pass, but for right now, there is no more enthusiastic Long Islander about the snow. (Actually, I may be the ONLY enthusiastic Long Islander about the snow.)

I think it's just that this is the first time I've ever lived with seasons --the first time I've ever had real winters.  This is really the first time that I understand the complete and utter rebirth and renewal that happens in the Spring.  In Austin, the seasons (both of them) sort of slide into each other without much change, which is nice, especially in February when it's 80 degrees outside. This is different and beautiful and feeds the soul in a whole different way. This will be my last post about the snow, I promise. (Theoretically.) (Hopefully.)

Ladies and Gentlemen, for your entertainment and possible derision, I spent Wednesday documenting our Snow Day in photographs.  I was sort of going to do a "live blogging" of the whole thing but then I got called by the Siren Call of the Nap and well, here it is several days later and I'm still kind of groggy.

I got up at 7:00, which is also called "Barb Sleeping In" by people who know me well.  I've been fighting an upper respiratory infection and not sleeping very well.  The pets actually let me have an extra hour, although I think my Edward kitty did it out of remorse because he'd thrown up on my bed in the night. (Nice.)

Anyway, I got up and immediately took some pictures of the snow coming down because...well, there was JUST SO MUCH OF IT.

And then I started my usual full-time job, which is Official Doorman to the Pets. 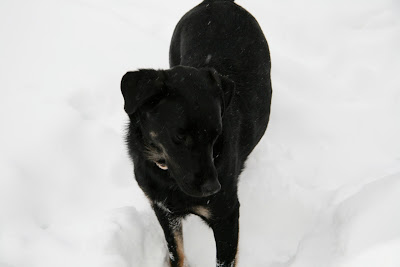 While I am trying to coax Jane into eating something (my OTHER full-time job,) I walk past my dishwasher,  which needs unloading. 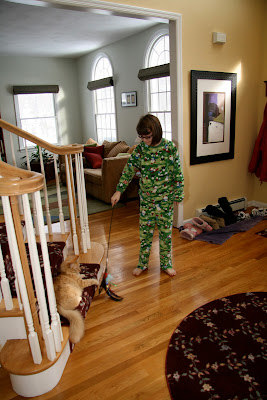 Jane plays with Edward, who has a serious case of cabin fever. 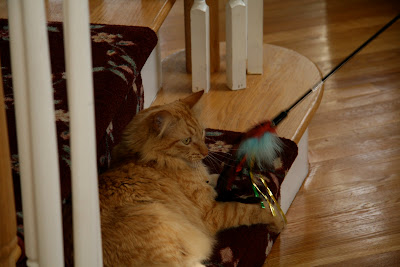 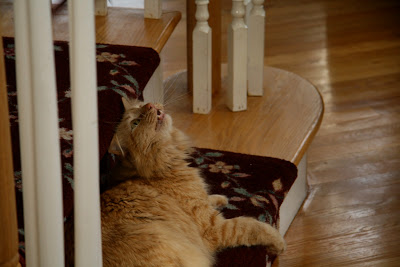 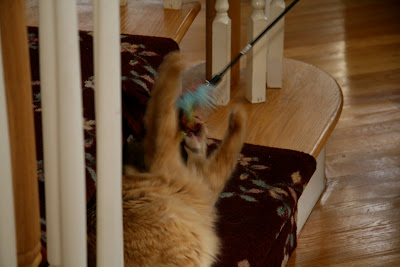 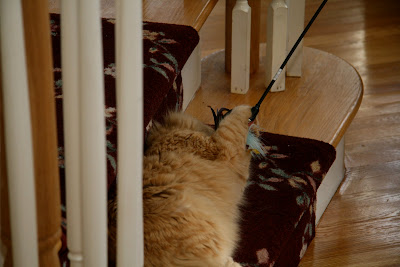 (Also?  I unloaded the dishwasher.  No pics there either, mercifully.) 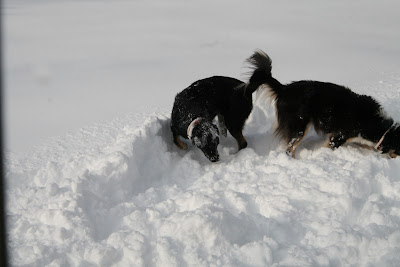 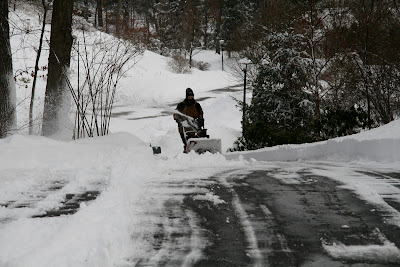 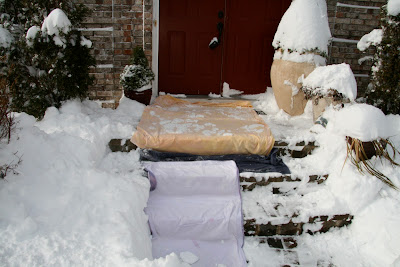 It's a good workout, if not quite the Zen feeling I was after. 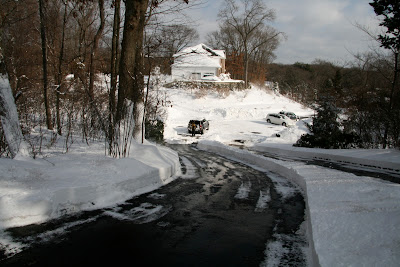 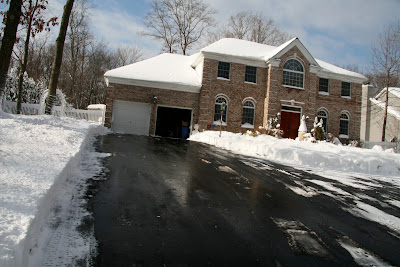 It does occur to me that our driveway is way too freaking long and steep.  And there is a LOT of snow. 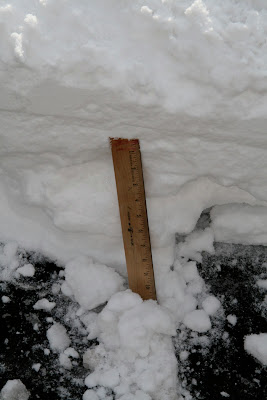 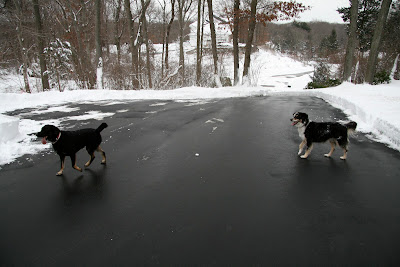 The dogs do not care.

Okay, I could go on and on about this (with pictures) but I'll spare y'all. Suffice to say that there was sledding: 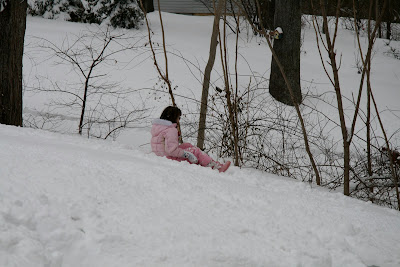 More bread baked:
a Cardinal at the feeder:

and a big ole pot of chili. 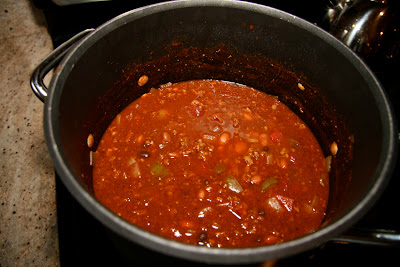 The Dister said…
We are being snowed in today....I was up at 7:00 AM!! shovelling the steps, the walk way, the sidewalk, the driveway (not much of the driveway actually) and have been on the couch since (except for the time I got up to get tea and cookies). I just wish it was a little sunnier. I SO love lots of fresh snow with bright blue skies! Think I'll make soup later.
January 15, 2011 at 11:29 AM

Sarah said…
1) I have one of those cool French Bread pans. Use it for GF French Bread because you sure can't buy that.

Ann in NJ said…
You got way more snow than we did - we barely hit 6". They cancelled school anyway as it was supposed to be falling heaviest during the 6am to 10am busses on the road period (didn't, but that's weather forecasting for you).

Love the yoga frogs. Your enthusiasm is encouraging me to try yoga (never have). Any suggestions? I have a bad back so have to be careful with twisting.
January 15, 2011 at 1:01 PM

@Ann: I took a yoga class last week with a friend who is recovering from breast cancer and cannot do any movement that puts weight or pressure on her left side. It was such a gentle class. Let me find out exactly what kind of yoga it was and I will send you an e-mail. Wait, do I have your e-mail address? Send it to me at barb@sothethingis.com just to be safe.

Kathy and Margie, you guys are unfailingly nice to me. I am not sure what I did to deserve you all as friends, but I thank you. Wishing you both bright blue skies!
January 15, 2011 at 1:05 PM

Mokihana said…
I LOVE LOVE LOVE your snow photos! We keep getting bypassed by it. I could use a snow day like yours. Nice job of clearing the driveway! Ours is ʻway steeper than yours and a tenth of a mile long with a killer curve. My husband used to shovel two tire tracks all the way down but not any more. Now we stay home.

in re: Road Construction -- around here, summer road crews are on loan from the wax museum. If you watch carefully, you can see them melt. At least that generates SOME movement.

And all that snow? Makes for a lot more road damage. In spring we get two things: flowers from the few isolated bulbs that the #@%$## squirrels managed to miss, and potholes.
January 15, 2011 at 1:53 PM

momwhoknits said…
I would love a snow day - but we never get enough snow to get a snow day. Instead we have insanely cold weather (yesterday? -29 degrees C with the wind chill)- that you still have to go out in because of school and work and you know - everything! I try to soldier on - even went for a 60 minute run this morning - but I would love to stay home, all nice and warm rather than have to go to work. I am lobbying for "stupid cold" days - wherein you are stupid if you go out. But sigh, no one has taken me up on it so far.
Love the pictures (especially the one of Austin with his head in the snow - and the one of Edward looking outside as if all the world is conspiring against his desire to go out).
January 15, 2011 at 2:03 PM

Anonymous said…
Barb - I am so envious! "They" (local weathermen, Weather Channel, national weather guys) promised that we'd have 1-3 inches of the white stuff last weekend, and THEY LIED ON US! The storm split and went both north and south of Shreveport, then re-grouped just past Bossier. 'Taint fair! I love your pics...all of them! (And I totally understand your enchantment with snow!)
January 15, 2011 at 7:46 PM

LaDonna said…
I really do envy your enthusiasm about the snow. If I could some just a small portion of your excitement, I think the winter wouldn't be so long. Of course, maybe it's just that I'm bitter that my trip to see family and friends this weekend was once again thwarted by the white stuff. Ugh.

I really do get it. I remember the few snow storms we got out in Washington. We were so excited to see the snow...it was so pretty, the kids could go play in it, all the things you said. But here, it's just snow and cold and snow and cold from November to March...oh and then it's flood. Ugh.

And remember, you're still in the "pretty snow" phase. It's still white, it's still fluffy. But when it starts to melt and it turns into dirty piles of muck, it just loses so much of its charm. Ugh.

Bullwinkle said…
I love a good snow day! The smell of baking, a good workout shoveling, watching the felines wrinkle their little noses and wonder what happened...time to knit :)
January 17, 2011 at 10:35 AM

Barb Matijevich said…
@Ann, the gentle yoga class I took was a mixture of a type called Kripalu and some breathing. If you can find a place that does the Kripalu, I bet it would be gentle enough to start you on the yoga path, if not obsession!
January 20, 2011 at 8:45 AM

Anonymous said…
Hi Barb, Don't worry there are a lot of us New Yorkers, Long Islanders who LOVE the snow no matter how many times we have to shovel the driveways...you are not alone. Think snow!
January 21, 2011 at 7:55 PM