So, I got sick.
I had a little cough on Sunday morning that got worse as the day went on and then overnight became one of those "you might soon see your lungs up close and personal" kinds of coughs. Monday morning, after I got the kids off to school, I went back to bed with a fat orange cat and, wow, the weight of the covers made me seriously doubt whether I could get back up.

But I had a date to meet a friend for knitting (my knitting has been languishing for lack of good company) so I took a bath and dressed warmly and thought," Dang, I am so SORE. That was really a hard yoga class yesterday."

Wow, really?  I still debated going to see my friend until I realized that A) that's crazy and B) that's really crazy.

I called my friend and cancelled and then I made myself some tea and went back to bed.

My husband had to leave work and pick up the kids from school because, y'all, I could NOT get out of bed.  Seriously, I can be tough, you know (shut up) and I was just totally incapacitated.  When he got home with them, he packed me up and took me to the Minute Clinic. He's taken the kids there so often that after he signed me in, reflexively, he handed me his phone to play with.

Anyway, the nurse practitioner diagnosed me with the flu.  Before she diagnosed me, though, she told me she was going to recommend treatment for the flu even if the test didn't show that conclusively.  "Because you look absolutely...terri-EXHAUSTED."

So, I had that going for me.

Y'all, I was so sick.  Sick enough that I will vow to you to get a flu shot every year for the rest of my life.  Seriously, I know it's not 100% effective in warding off the scourge but if it's even 50% effective, it's worth it. I couldn't even KNIT.  I couldn't read.  I couldn't write.  All I could do was lie under the (incredibly heavy) covers and pray that I hadn't given it to anyone else. I don't understand what it is about the flu that leaves you feeling like you've been in a car accident --my body is so sore.  I just took a bath and there was some concern (well, okay, on my part) that I wasn't going to be able to get back out of the tub.

(As an aside, because it's me and all, this is what I see every time I go into my bathroom now.

A few weeks ago, my orange tabby Edward had another one of his spells of lunacy brought on by his inability to poop (he has plumbing problems since his six week AWOL stint) and, rather than have him pee on my bed AGAIN, I fixed him a nice little nest in our master bathroom.  There's a--hello! --litter box in there and I was hoping that maybe he'd--I know it's a stretch--try to USE IT.  So I brought food and water up and then I shut him in so I could listen to him curse me in foul cat language until I let him out.

Our other orange cat, THOMAS, on the other hand, thought this idea of having a buffet and a litter box somewhere on an entirely different floor from the dogs was the best thing he'd ever heard of.  And while he's not exactly a Rhodes Scholar, there is enough room in his brain for at least one thought and that thought is: FOOD.  Especially if the getting of said food does not cause him much effort. So now, he is full-time lobbying for the master bathroom as his own personal spa and restaurant.

Which makes me laugh mostly, even if it has added kind of a creepy feeling of being watched when I'm in the bathtub.)

So, anyway, I got really, horribly sick, so sick I couldn't do anything but lie under the covers and moan.

And then I started feeling better.  (All hail the Tamiflu! --possibly the best medical invention of recent years.)

But the thing about having the 'flu is that no one wants to have anything to do with you while you have it.  Ever.  At all.  In case you might still be contagious. In fact, people don't want to see anything that might have been NEAR you. My husband bought me a box of 50 (!) face masks to wear when I'm near other people in hopes of stopping the plague before it goes any further.

Just now, I went downstairs to take my sheets to the laundry room (I am trying to de-germify my surroundings) and the whole family basically cowered in the dining room until I got back upstairs. It's not that they don't love me.  They just really don't want to be within a ten-foot radius of me. (My husband said, "Are you down here without a mask?" I was.  I'm sorry.  I forgot.  I won't do it again.  Look: 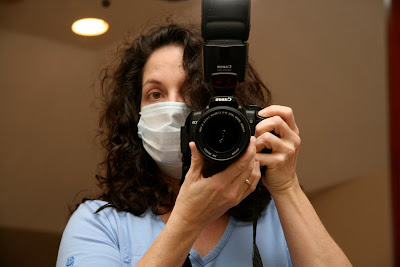 But it's getting a little lonely up here and Thomas isn't that great of a conversationalist.

Hey, want a tour? That way, you can come see me but not get anywhere close to me.  Which is probably all for the best. (Sob.)

Here is my bed:
And here is my nightstand:
See? 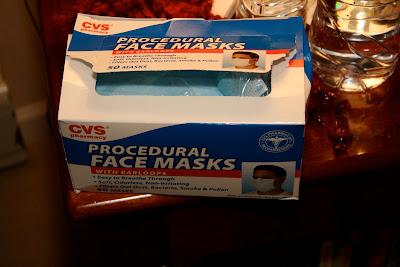 So anyway, if y'all were wanting to chat with me on Facebook or discuss deep and meaningful things via e-mail, this would be a good time. (Well, after I have a wee nap --blogging is exhausting work, you know.)  Feel free to reach out at any hour of the day or night --we'll just be hanging out.

Ann in NJ said…
Oh, the misery! My husband had the flu last year (probably swine) and it was actually rather scary. He sort of quarantined himself, but we were very lucky that no one else got it - even though we hadn't had flu shots (yet). Hope you're feeling better.
January 25, 2011 at 8:17 PM

Barb Matijevich said…
I was feeling so much better! I wrote a perky blog post! And then...the death spiral. Fever back to 101, body aches, lack of orange tabbies--sheer misery. At least I know I'm on the mend. I hope. (The nurse practitioner was really concerned about my propensity for getting pneumonia, which she says is the really big problem with the flu. So I've got THAT to look forward to...

Unknown said…
Oh I want to be sick in your house just to hang out with your boys in the bathroom!!! I hope you feel better very very soon.I had the flu last year at the same time as my son and my husband was out of town, in Peurto Rico, I think. I wanted to die.
January 25, 2011 at 8:31 PM

hollygee said…
Don't try to do too much to soon. I'm almost sure that is your tendency, but DON'T! You'll just cycle through it several times if you don't give up to it entirely.

Susan said…
You have my sincere sympathies. The flu is not fun. Pneumonia is less fun so look after yourself. I'm impressed that you were able to write such a long blog post. Yes, get a flu shot next year. Since I was diagnosed with diabetes, I can't possibly miss getting a flu shot. Every time I see my dr. he asks if I have had it. I swear it works.
January 26, 2011 at 12:07 AM

Lynn said…
You'll know that you're on the mend when you can pick up that copy of the NYT without radioing for backup. Hope it's soon.
January 26, 2011 at 6:53 AM

hokgardner said…
I had H1N1 last year, and it was the sickest I'd ever been. I made the same vow you did - flu shots every year, no matter what.

Anonymous said…
Oh Barb - you poor dear. And poor Coop, too...just where is HE sleeping these days? BTW, don't even THINK of doing anything strenuous (like taking a bath, picking up a cat, or doing laundry) until you've had 2 full days in a row where you don't feel like you're dying. Relapse is the pits. Much worse than the first go-round. Take care!
January 26, 2011 at 4:30 PM

Damsel said…
Are you feeling better yet??? For good???