Okay, everyone who missed me run around in circles barking madly. Bring me a tennis ball or two. Rub up against my legs and purr loudly.

Ahhh... I feel so welcome. Thanks.

So, I'm home. Coop stayed in NYC doing Manly Business Stuff for a few more days. I caught a cab to the airport at 7:00 this morning and finished the sock (except for the Kitchenering) in between praying not to die. 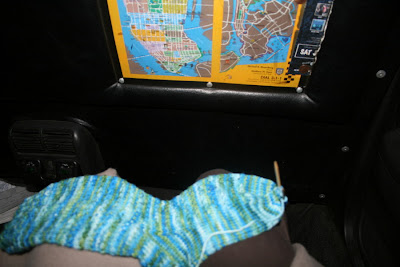 I cast on the new sock and then sat clutching it to my breast and doing that "air-braking" thing you do when you're just positive that it will help stop the vehicle, rather than slamming into the back of some nice produce truck. We got to the airport and the cabbie naturally upped the fare by $20 from what he'd quoted originally but I was so grateful to be back on land, I gave it to him.

The flight home was pretty good and landed on time despite the fact that we had to wait in line forever to take off. Apparently that's pretty normal for Monday out of JFK. By the time we took off, I was this far on my second sock. 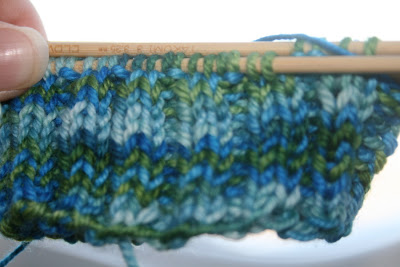 And New York had color again. 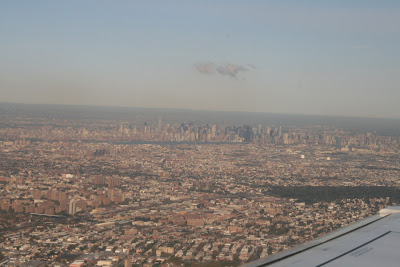 I didn't realize that the lack of color when we flew in on Friday was because it was about to rain huge buckets all day on Saturday but there ya go. I'm still a little nervous about getting my new camera wet so I didn't take many pictures on Saturday (being as how the camera is technically not paid for yet and this weekend seriously didn't help the camera fund one bit. Oh well.)

Sunday was really pretty so we went for a drive and ended up on the south side of Long Island at the beach. It was beautiful. My pictures don't do it justice. 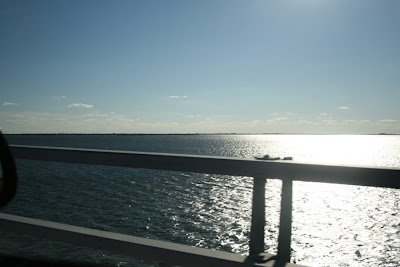 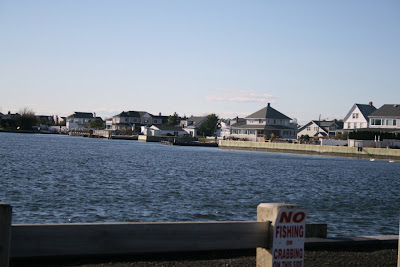 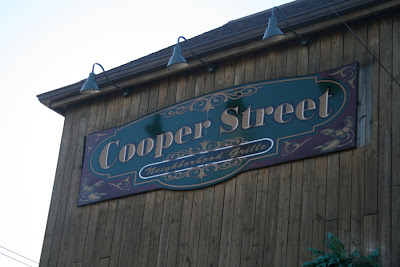 Look! The New Yorkers spared no expense nor effort to make us feel at home!

I did try to take some pictures of the fall color for you guys (or, as I learned to say after about the sixth person fell to the ground laughing when I said, "y'all," youse guys) but my pictures didn't come out very well. Here's one but it's blurry. 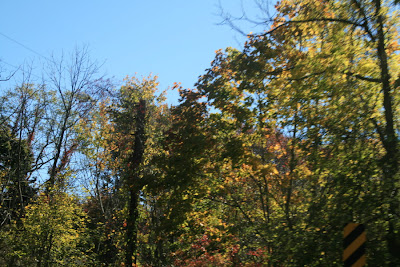 So, anyway, then we headed into "the city" as everyone there says and we spent the night in Manhattan. Coop took some pictures but with HIS camera so they are still in New York. I'll show them to you later. We had a great dinner and then I flew home this morning. I knit almost the entire trip, except for a brief nap. See? This is how much you can get done on a sock in three hours: 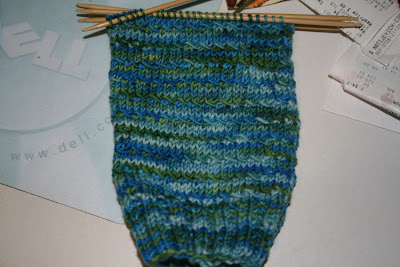 And this was Austin as I was flying in--so green. 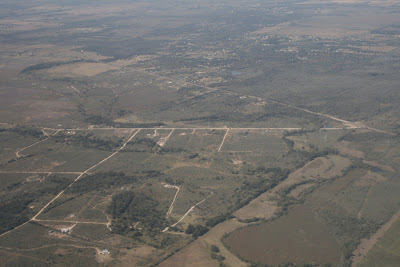 And then Jane got off the bus with an all-over pink rash, which led to a doctor's consultation and the diagnosis that she is allergic to penicillin and must not have it again.

It was really fun while it lasted.
Email Post
Labels: A picture is Worth at Least Ten Words humor knitting Life in the Modren World love travel what makes a life yarn

Suburban Correspondent said…
Welcome home! I hope youse guys enjoyed your foray into these northern parts. And I'm jealous of your sock progress. I need a long airplane ride to nowhere, just to sit and knit and be served drinks (do they still do that on airplanes?).
October 29, 2007 at 9:41 PM