Anyway, I've been taking a sock with me, like I always do so that I don't kick people in the shins when I have to wait somewhere in line. But it's a terrible sock. It's just plain stockinette stitch and although I am using a gorgeous Claudia Hand Paint (I've used it before in THIS sock) it looks terrible. The color is pooling badly and it's boring. 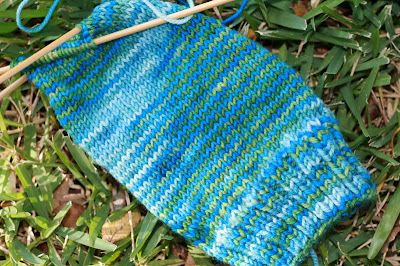 So, the other day I was sitting in a Starbucks knitting along on it while I waited for my friend and someone at the next table asked me what I was knitting. I said, "Well, it's a sock but I think now that maybe it's a bit wide for a sock so maybe, it's a LEG WARMER!" I thought that was funny and might make her laugh since she was a perfect stranger and that's usually my goal when I meet someone. But this look of horrified concern crossed over her face and she said, "Hey, maybe you could make it into a sweater sleeve. It LOOKS like a sweater sleeve. Maybe it's a sweater." And then she picked up her little girl, who still had half a cookie in her mouth, and beat a hasty retreat. (Hey, I saw leg warmers in Target. It's not like I have some yen for the 80's you know.

Dude. This is BRILLIANT!

I think we may have timed our girls' interest in clothing to peak just about the time the Preppy Look comes back in!
Is that the coolest thing or what?

I'd like to take full credit for this but actually, it's really something we've just been praying for. Because if my daughter comes home with a pierced...well, ANYTHING or a tattoo, y'all are gonna have to come visit me in the place with the nice padded rooms. Is all I'm saying.)

Anyway, so then I thought it could be a sweater but just now I noticed THIS: 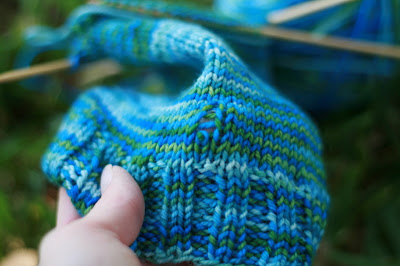 For you non-knitters out there, THAT is what a dropped stitch looks like. So, I'm ripping the thing back to the beginning and I will start again.

It can join the bulky mittens I've been working on, which currently look like this. 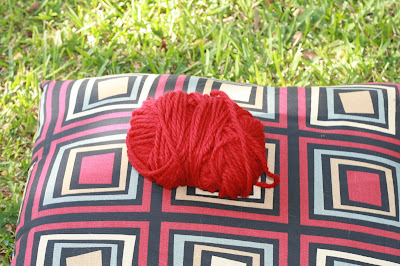 I was going to wear them with the sweater I was knitting. It looks like THIS at the moment: 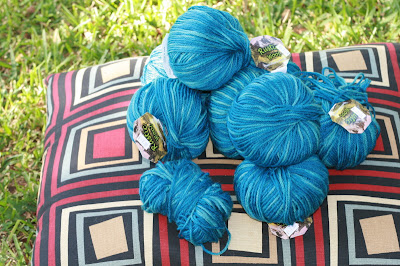 Isn't that so nice? I think both of those will go so well with my new socks. They look like this: 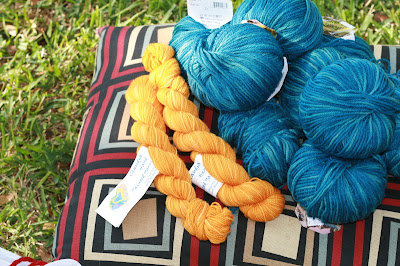 (Yes, it's true that if some miracle occurs and I make all these things, I will look like a slightly off color traffic signal but hey, it'll be cheerful!)

In other news: this is what I let my kids do as their after school snack yesterday: 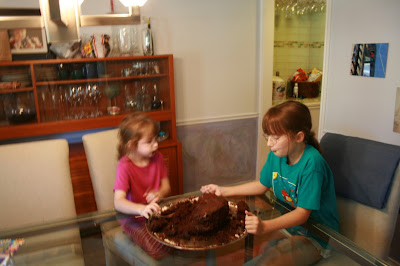 You know how cake reaches that point where it's not longer cake and it sort of becomes...something horrible that absorbs its own icing and then hardens and is awful? Jane's party cake was on the verge. So, I gave the kids forks and told them to have at it. 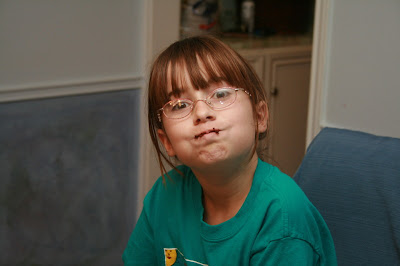 Oddly enough, both ate a small piece, and then played with scraping some icing off and then they were done. They, get this, listened to their stomachs, which apparently are infinitely smarter than MY stomach and then they stopped eating. 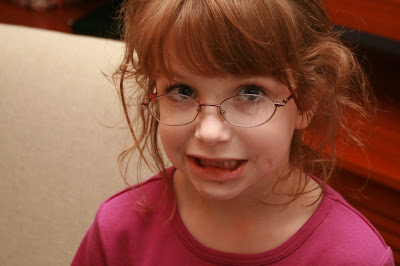 I don't know. It seems like at some point we lose that sort of self governance.

Well, probably not you. But I seem to have lost it. I could learn a thing or two from my kids, eh? 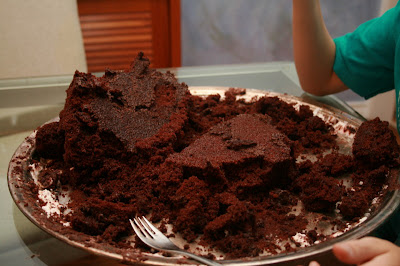 Kerry said…
I thought the sock looked nice. It would have fit nicely over my swollen ankles! I don't think I would have frogged it over a little dropped stitch!

Hey, can you point me to a really simple, fast, and free pattern to get started knitting socks? Pretty please?

Stefanie said…
I have a cake in my downstairs fridge that is absolutely BECKONING to me. (I'm sure it would beckon to you too, seeing as it's chocolate rum flavored. He he)

Innocent Observer, run - don't walk - to your nearest bookstore and buy a copy of Knitting Rules by Stephanie Pearl-McPhee. She has a sock "recipe" in there that taught me how to knit socks. And I really don't know how to knit. Go!
October 18, 2007 at 9:41 PM

hokgardner said…
I know what you need! You need to sit and knit with me next week for an hour or so. We can knit and gab and not scare strange women in Starbucks. How about Tuesday morningish?
October 18, 2007 at 9:52 PM

Anonymous said…
Except for the dropped stitch, I really like the sock! I actually like the pooling, and the colors remind me of the Pacific Ocean in which I learned to swim.
October 18, 2007 at 11:16 PM

Suna Kendall said…
Yeah, you were too hard on poor socky. But it would make nice leg warmers :-)

It's been really busy at my house so my knitting is going too slowly. I feel like I have been on the same pair of socks for weeks. Oh, I have. That is because my cardigan keeps plodding along and I work on it more. I think I can, I think I can.

Wendy Johnson has some nice easy beginner socks on her blog (wendyknits.com) including easy toe-up ones with all the directions spelled out.

The beginning sock pattern Fiber Trends sells is also good. Your local yarn shop may have it.

I'd probably go with the Magic Loop booklet and start on circular needles, but, Barb seems to be a DPN person, which also works fine. (But it's easier to drop stitches with that method, LOL)
October 19, 2007 at 9:53 AM

Heidi Malott said…
I love the colors of yarn you choose Barb. They are so rich and beautiful! Have you seen the arm warmers? I saw a pair while out at Target with my daughter, ah, I love Target, anyway, they were really cute, they have a hole to put your thumb through. My 9 year old is such a free-spirit-silly-heart-artsy-modest kinda girland I think she might like them. They might sound weird but I think as long as they are pink or close to pink, they wont look like they belong on someone tatooed or pierced, I say that cause I think I've seen them in the "black-goth look also. Sorry this got soo long.
October 19, 2007 at 12:30 PM

MadMad said…
Oh, you're funny. Maybe you could just tape the skeins into place on your body... instead of knitting? It would be faster anyway. Let me know when you get pix of that...
October 19, 2007 at 1:39 PM

Anonymous said…
I thought the sock looked great, but since you have to Frog anyway, try something else.

Brent Diggs said…
I can hear that cake calling me from here.

I don't know if I can sleep knowing that such a pile of chocolatlyness lies unguarded.