My daughter Jane's seventh birthday party, I mean. I feel like I should apologize to everyone who ever thought of having their kids come to this party. There was so much chocolate, it was a bit obscene. Seriously. And not just because I had a big smear of it across my chest and I was wearing the "distract them with cleavage and/or poison ivy" swim suit.

So, all in all, a very successful soiree.

I'm not sure I've ever been so tired, though.

You know, it's really funny. In my life before I had children, part of what I did was direct large special events for non-profits. Every year, I directed a project called Coats for Kids that collected donated coats and distributed them to disadvantaged kids. Like, we collected 30,000 coats and distributed them to 12,000 kids. (This was ten years ago. I'm sure the numbers are much higher now.) It was an amazing undertaking. It took more than 3,000 volunteers, including the National Guard, the Junior League and volunteers from the community. I directed the entire thing, with the help of one assistant.

It did not make me as tired as throwing one party for a seven-year-old. I'm pretty sure this is the difference between being young and being old. I'm also pretty sure which one is better.

Here is my van as I was packing it up to go to the community pool where we were holding the party. 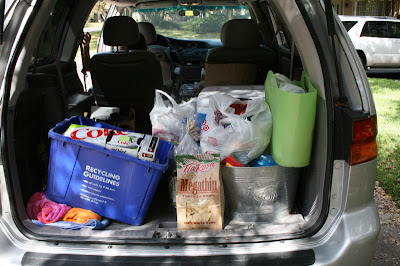 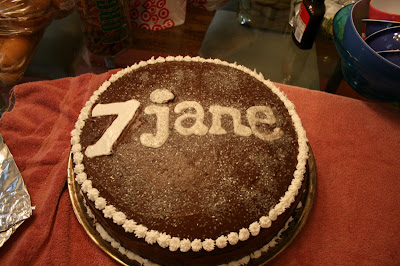 We had a chocolate fountain, which was the hit of the party except it was windy so the chocolate kept flying all over people like a weird monsoon. It was straight out of that children's book "Cloudy with a Chance of Meatballs." 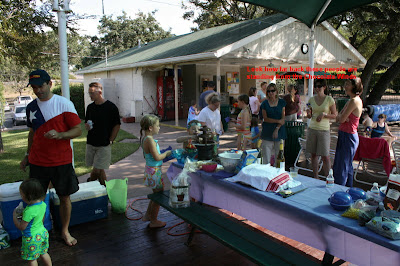 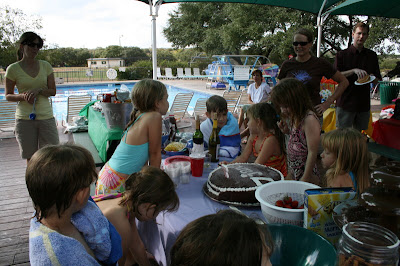 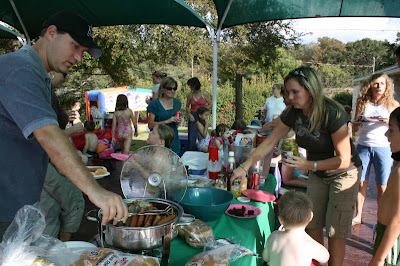 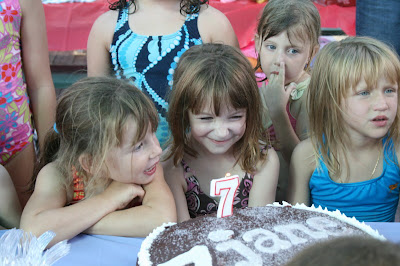 At one point, Jane just decided to start opening presents and I realized that I had forgotten paper and pens to write down who gave what. The other parents immediately and unanimously decided that their present to us was that we didn't have to write thank you notes. I fell weeping to the floor in gratitude. 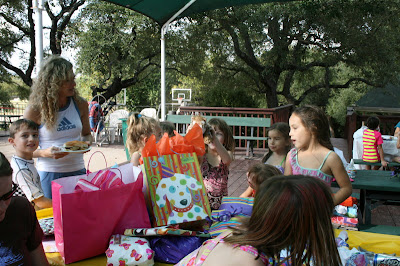 By far the best thing I did, though, was have the kids make their own goody bags. Earlier that morning, the girls separated two enormous bags of M&Ms into colors and we put them out in bowls, along with some clear plastic goody bags that I had bought at a craft store. (I didn't buy the largest size, either. I was seriously beginning to worry about if I needed to have some sort of insulin shots for the parents to administer.) 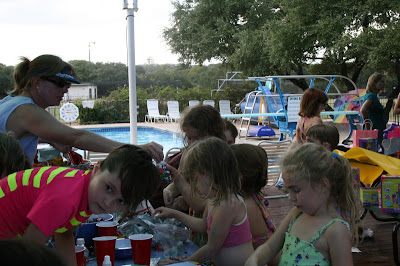 Anyway, this worked like a charm. Every time I think about it, I feel sooo smart. It's like in Peter Pan when Peter keeps saying, "Oh, the cleverness of me!" (except, of course, I stole the idea from someone else.) Typically, I am up until 2:00 AM filling goody bags with those stupid little trinkets. (Who invented those flapping hand things anyway? Was there ever a worse use of child labor in China than putting THOSE things together?)

(Anyway, I digress. Shocking, I know.)

The only thing that I could have had that I didn't was a dentist to give a little cleaning before the children were allowed to go home. Also, I wished I'd warned the other parents about the fantastical powers of chocolate to travel onto clothing and shoes and hands. We were all covered at the end. 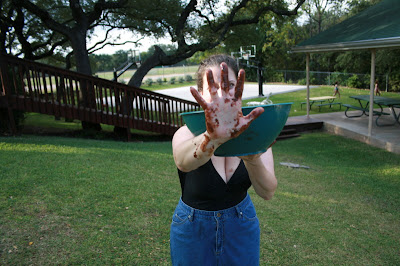 (Please remember that the camera adds... forty pounds. I'm pretty sure I heard that somewhere. FORTY.)

And THEN, inexplicably, the Birthday Girl was ready to go home and play with her toys so I got to take her home and my husband VOLUNTEERED to pack everything up and bring it home later. Is that just... the extra chocolate in the fountain, or what? How much do I love him? Especially since I was starting to sort of speak in tongues at that point from sheer fatigue.

The reason all of this is worth it: 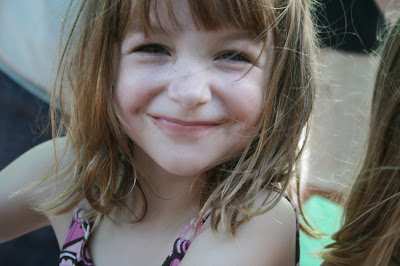 Email Post
Labels: A picture is Worth at Least Ten Words gifts humor Jane joy Mother of the Year Award--Not parenting what makes a life

DK said…
Awwwww. That turned out so well!!!

Those chocolate fountains are dangerous, man! My friend had one at her wedding instead of a wedding cake, and, oh man was there chocolate everywhere. ::sigh:: It was such a good time...

You, also, look fabulous. And the poison ivy looks like it's healing pretty well, there!

And I know I've said this a couple of dozen times before, but before I ever agree to take the big M plunge, I'm sending my theoretical man to Mark Cooper Husband Training Camp. They can go fishing or biking or something, too, I'm sure they'll have fun (because you know he's going to have to be approved by general Cooper consensus well before we even get that far...).
October 15, 2007 at 1:50 PM

MadMad said…
Soooo cute! You sure we can't sell her on Boy, eventually? Maybe he'll get better - I have some time to work on him...

Suburban Correspondent said…
You weren't more tired because of old age; anything to do with a small child is more tiring than anything else. I know high-powered women execs who would much rather be at the office handling deals worth lots of money than at the grocery store dealing with, say, 100 dollars worth of groceries. Because the store (especially with kids) is much harder and more exhausting. I'm not sure why this is, but it's true.

I think being in our 40's is not going to be the best time of our lives. I keep looking longingly at couples in their 50's - they look so relaxed, their kids are out of the house, they can hang out with their friends....and they aren't trying to look like they are 30. Right now, the pressure is still on to look young and not our age. I think that changes at 50. I sure hope so.
October 15, 2007 at 2:41 PM

I will let you know if I suddenly start feeling more relaxed in March, when I hit the half century mark.

Ei said…
Do you think orchestra is any better, Suna? My big boy wants to take violin.

It is my running theory that they take your energy (and yes, your brain) in uetero, and no one ever brings it back. Well...I'm waiting for Hugh Jackman to come and disprove THAT theory. But anyway.

Anonymous said…
looks like a fab party to me! having the kids fill the bags was a great idea - and I bet they had a blast doing it too.
I once had an employee that never ate the brown m&m's when I asked her why she said she was allergic to chocolate!
The 50 thing is catching up with me in Nov but I can't think that it will magically change anything
October 16, 2007 at 9:35 AM