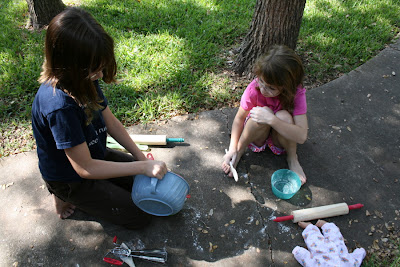 Today was an early release day at the school so the kids came home at 11:45.

I was sort of dreading it because I'm still fairly traumatized by the memory of summer vacation. (The twitch is almost gone but still discernible anytime anyone asks for ice cream.) Plus, I didn't have anything planned, which is normally the kiss of death when it comes to encouraging bad behavior. I thought I might take the girls swimming at the community pool but Ana nixed that. (She's so DONE with swimming, you know. It messes up her hair.)

So, we watched the Muppet Movie after lunch (I know, I know, I caved) and I curled up on the couch behind Jane and took a little nap. It was blissful--there is nothing better than napping with Jane --although trying to nap while she's narrating the action in a movie and repeating the jokes isn't the most restful thing in the world. I don't care. She's darn huggable and I enjoyed it.

And then I remembered Playing With Flour. 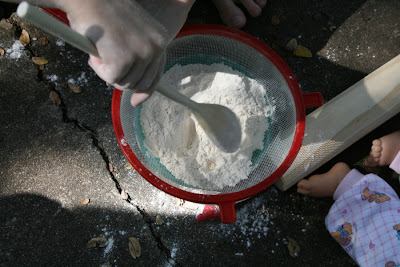 Dudes, we used to do this all the time. I don't know why I just remembered it again after such a long time. Maybe the memory of the last time when it didn't get cleaned up and I had to throw out something that smelled so bad it made me gag sort of soured the whole thing for me. I don't know.

Here's how it works: basically, you take some really cheapo store-brand flour, or in my case, some flour that's been sitting in the pantry a bit too long and you give the kids a bunch of utensils (Target frequently has these sorts of bowls and whisks, etc. in the dollar store) and let them go to town pretend cooking. My kids love it. Which is sort of amazing when you think of how reluctant they are to help me REALLY cook anything. Unless it has chocolate chips in it. (Not that I'm bitter.) 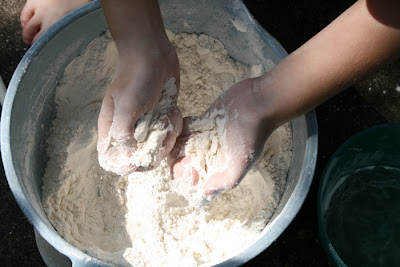 Now, at some point, the kids will want to add other "flavors." You might as well let them because it's not like you're going to use that flour again anyway. Here Jane has added some dirt--oh excuse me, I mean CHOCOLATE-- to hers. 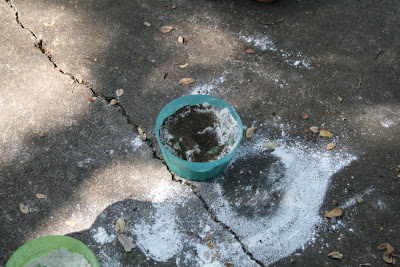 The really big thing is to hold off letting them add water for as long as possible, because it is here that the real mess-making potential is unleashed. Like, um, ONE of your kids might decide to put her feet in the mixture. I'm just saying... 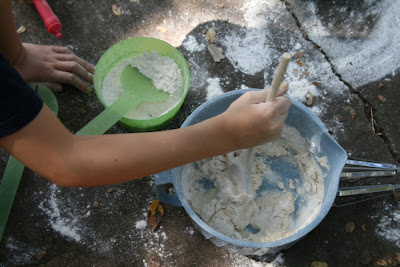 Another important thing is to tell the kids that they can't come in the house. If they need anything else, they have to stand at the door and shriek for you. This goes against our standard No Shrieking For Mom Policy but trust me because if you haven't had to clean up flour out of the grooves in your wood flour, you're not missing much.

I was waiting for the bickering to begin but oddly enough, they have moved on to playing with the hose and the clean-up from the flour was fairly minimal because I dumped the horrid mixture into a plastic bag and Ana sprayed out the bowls, which are now happily in the dishwasher. 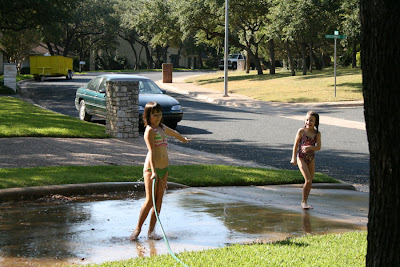 (Um, don't tell Ana, but I think playing with the hose has messed up her hair. Shhh.)

Updates on Random Weirdness from Yesterday:

I guess you couldn't tell in the pictures, but the snake had already met its demise. I suspect Edward but have no proof. It's still lying on the front walkway because I really don't want to pick it up (see: snakes, fear of) and my husband forgot.

There were five of us at the Book Club and we had such a nice time. Seriously, it was exactly the Anti-Grouch medicine I needed. AND I got to light my fireplace candelabra, which I haven't done since, oh, 2005. 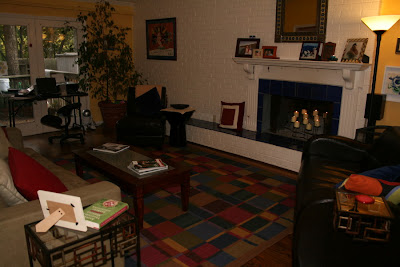 No word on the Toad.
Email Post
Labels: A picture is Worth at Least Ten Words humor joy kids Mother of the Year Award--Not parenting small things summer

Denise said…
Just wandered onto your blog, but thanks for the idea on the flower. My monkeys have early release Friday and a "holiday" on Monday. I think it's "Drive Mom over the Edge Day" or something like that.
October 3, 2007 at 9:37 PM

DK said…
Dude, that looks like way too much fun. Could we play with flour sometime? Or are we just too old?

If the toad comes back, and still seems a little like he wants to come in for a cuppa, would you ask him if he's looking for me? I think I'd make a kickass princess. And I've already kissed a whole lotta toads...
October 3, 2007 at 10:03 PM

Ei said…
I'm buying cheap shaving cream for our next day off. I've been looking at pictures of my friend's kids playing in it and I decided I must have some of those pics.

Barb Matijevich said…
You know what's funny about that rug? When we were selling our old living room furniture, we posted pictures on Craigslist and at least four people wrote in to say they weren't interested in the furniture but was the rug for sale?

It's a wool area rug that I paid, I don't know, something like $400 for in 2000. I got it from Storehouse Furniture, which I think has since gone out of business. It has been through some serious parties and the whole housebreaking of Scout and it still looks great. No fraying, nothing.

Dude, DK, did you not see my post about making bagels? I get to play with flour IN THE AIR-CONDITIONING!

I wish I could clone Coop for my girlfriends. I know that sounds weird and kind of ... well, really weird but he's such a good man and for me, if I never kiss another toad, that will be just fine with me.
October 3, 2007 at 10:22 PM

Suburban Correspondent said…
Hey, but maybe the flour in the grooves of the floor would keep the floorboards from creaking?