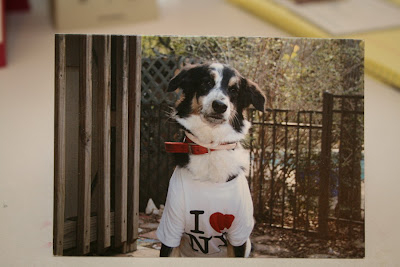 So, how weird would it be if the same day we closed on our house in New York, our house here in Austin went under contract?

It might happen. Seriously, we have an offer on the table and we're not that far apart. But for a few hours, at least, we are the owners of real estate in both Texas and New York. And if we won the HGTV Dream House Giveaway, we'd own houses in Texas, New York and FLORIDA!! Dudes, we're practically LAND BARONS.

And all on the same day that our new move announcements arrived.

Okay, back to whatever incarnation of reality I seem to be having today. Because honestly? I am having the weirdest week.

I think it really hit me yesterday (BOOM!) that we're moving to Long Island in less than two weeks, you know?

Like when I was talking to my neighbor about how great an opportunity this is and I started crying. Not crying crying but sort of just...I don't know...leaking.

Like when I forgot to take my daughters their lunches yesterday. Both girls needed lunches made and we were running late in the morning so I told them I'd bring them up later. Only I forgot to do it in time to get Jane's to her.

I think you know me well enough to know that this is NOT normal behavior for me.

She forgave me (and she ate a baked potato from the cafeteria.) (Lest you be worried that the little darling went hungry.) (Mom, I'm looking at you.) It was in her best interests to forgive me because the reason I forgot was that I was at the craft store buying the ingredients needed to make scrapbooks for their classes to fill with stories and drawings of the girls. Sort of a good-bye, memory-ish kind of journal.

(I interrupt this angst for a very cute Kid Moment. Just now, Hannah Montana came BLASTING from upstairs and I, suddenly inhabited by the persona of Parents Through The Ages who have yelled at their kids to TURN THAT RACKET DOWN, stomped up the stairs to yell in person. Because, of course, they couldn't hear me from downstairs. I opened Jane's door and there my two girls were, each dancing with a stuffed animal. Hard not to melt with THAT in your face. I wish I had thought to do my scolding armed with a camera.)

(As an aside to my aside (I'm good like that), one summer, every morning on my way back from walking around the lake with my friend Kathy, I drove home behind a truck with a bumper sticker that said, "It's not that I'm old. Your music really DOES suck.")

Anyway, back to weirdness--it's just been incredibly weird saying goodbye to people and meaning, well, GOODBYE. Not just, "Hey, see ya later." But "Hey, maybe we'll see you in a few months when we come visit."

And I saw one of my doctors today and we both teared up as we realized that this was the last time we'd see each other. 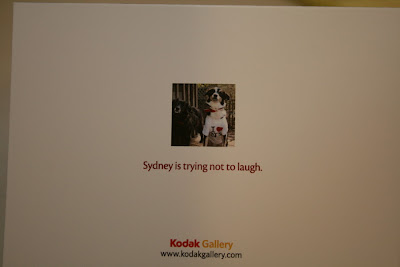 ckh said…
I'm very excited about your new adventure. Wrapping up the old adventure sounds hard, but they have this "as seen on TV" bonding epoxie that fixes leaks. Maybe it would help.

I hope the new contract on the old house works out for you. It would be a great way to remember the transition as being weirdly lucky.
February 27, 2008 at 6:44 PM

DK said…
I know. I do. The leaking, and everything else, does actually get better. I promise.

And ps, I LOVE the back of the card even more than the front.

Suburban Correspondent said…
It's hard, but it may be easier once you get there and are busy exploring your new home. For a while, anyway...

Paisley said…
Good luck with the contract on your house. I must say I'm jealous. I've had my house on the market here in Plano (we're practically neighbors!) with nary a bite. Can I have your realtor?
February 27, 2008 at 10:16 PM

Kidazy said…
Good luck with the move and with the contest! It would be absolutely awesome to own two houses at least!
February 27, 2008 at 11:50 PM

Anonymous said…
Don't worry, it's not so bad here in NY. I have moved aLOT, it's hard, but it will also be fun once you are here and setting up house. Here's hoping for a smooth transition:)

LaDonna said…
Sending you lots of hugs, hon! I know it's not easy (as I told you before, I've done it twice), but it really does get better. I promise. Before you know it, you will be making new friends and feeling at home in your new place. Just be patient.

I know what you mean about the strange leaking. It keeps happening to me too. Must have something to do with packing. Or something.