"They Were Mostly, Um, Stuntmen."

We continue to clean out closets in anticipation of the movers coming three weeks from today to pack us up and move us to Long Island.

(Did I just scream out loud? Sorry 'bout that.)

I think I've mentioned before that my husband, aided and abetted by his mother, tends to keep, um, well, everything. Maybe I've mentioned that one or two (million) times? I tend to milk the humor out of my husband's messiness because it's pretty much the only thing I can tease him about because he's so... well, perfect in just about every single way. And I am not just saying that because tomorrow is my birthday and he buys me great presents or anything.

Anyway, he has a bit of a little Clutter Issue. He comes by this honestly --his people Keep Things. Because you just never know when you're going to need something, right?

Like, um, a set of (occasionally intact) GI Joe dolls and their clothes.

I haven't laughed so hard in a long time.

He looks a little tired, don't you think? 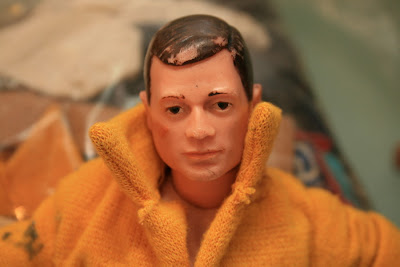 It might be because he's missing a forearm. Famous quote from my husband, "Well, these guys were mostly, um, stuntmen."

That would certainly explain that outfit. 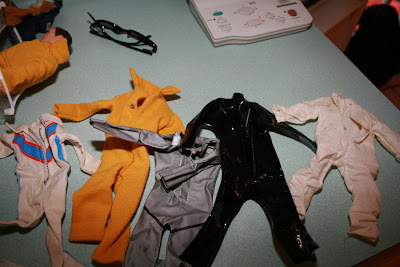 Well okay, maybe they could be explained by a combination of stuntmen and Saturday Night Fever. 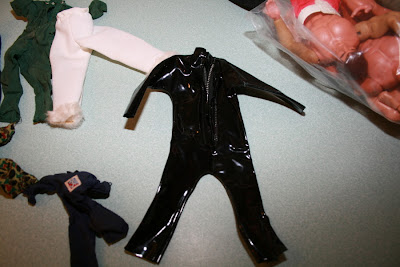 Oh, and look at these fur-trimmed pants. 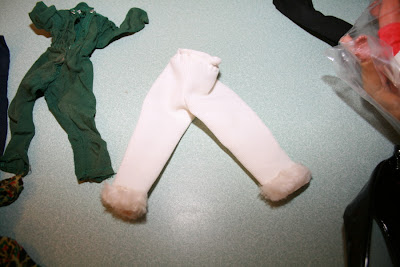 I'm guessing that these are for when GI Joe is moonlighting as a male figure skater.

However, there might have been some sort of issue because he had TWO pairs of these and one of them looks as if someone (shhh!) didn't quite make it to the potty on time. 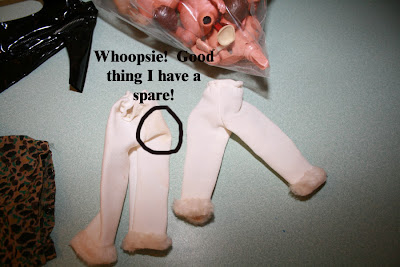 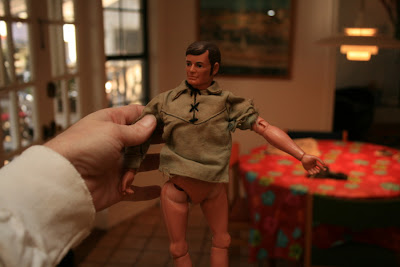 He's the Lone Ranger. We're not certain what exactly happened to his horse. Or his chaps.

This is the Six Million Dollar Man! 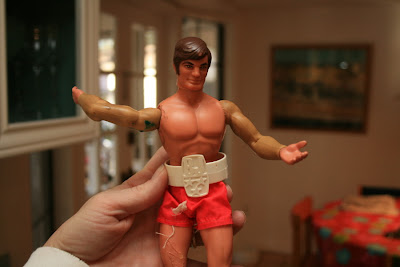 Coop showed me that he can do Karate chops. I said, "No, maybe that's just for pumping his arms while he's running."

He looked at me with that cute look that says, ever-so-clearly, "What PLANET are you from?" 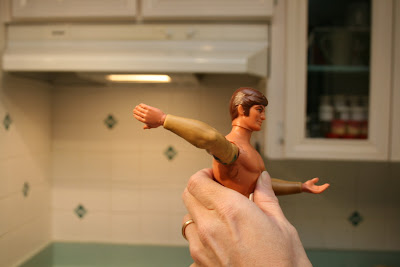 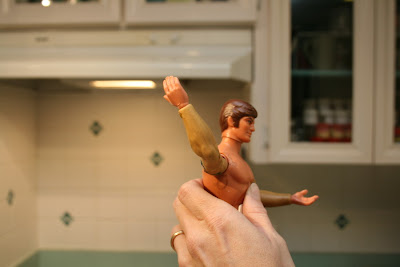 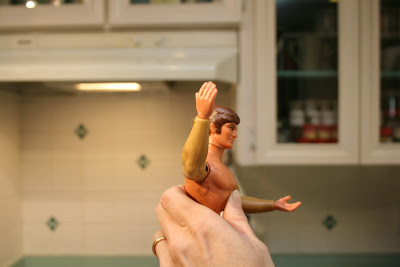 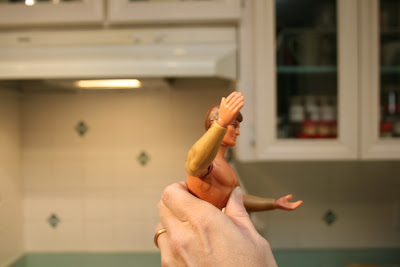 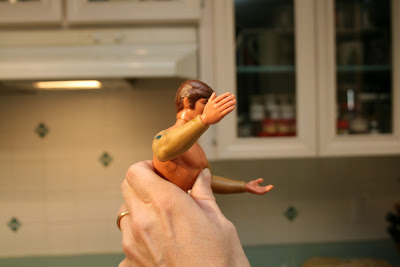 I almost fell on the floor and flopped like a fish when I saw THIS: 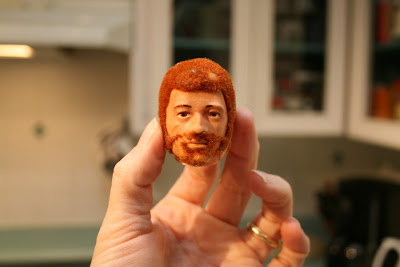 Doesn't he kind of look like a red-headed Burt Reynolds during the Smokey and the Bandit phase? The really funny thing (as if the beard and sideburns weren't funny enough) was that I took three photos of this head and the head looked increasingly psychotic in each one. And, um, the eyes followed me wherever I went. 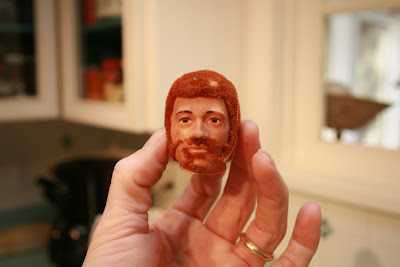 Maybe he was just mad because he wanted to wear this shirt today and couldn't find his gold chain to go with it. 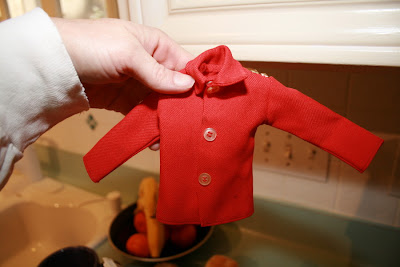 I had to hide it under a stack of random body parts. 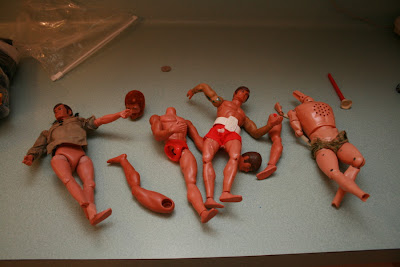 Even though, like, what was it going to do to me? ("Come back here and I'll head-butt you to death!") (Quick, name that movie!)

One thing is for certain, all of these little plastic figures are WAY too sexy for these shorts. 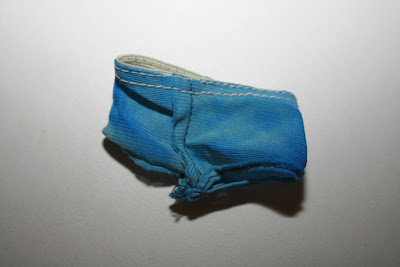 Anyway, I was all set to give them away when my MIL decided to take them home with her (she's been visiting) and keep them. Just in case her other son has boy children who might want them.

Tiffany said…
I'm pretty sure that flock-haired, red-headed...well...HEAD...is Chuck Norris. Pretty sure. Though I might not be allowed to say that here; he tends to file lawsuits over that sort of thing.

I'm also absolutely sure that GI Joe never wore those fur-trimmed pants. NEVER, okay? GI Joe was a Real Man! Geesh. I think they might have been slipped into the ensemble by an enemy soldier to raise questions about Joe's masculinity.
February 18, 2008 at 3:55 PM

Candy said…
OMG. I *knew* it. My husband has a second family. Because this is the kind of crap he keeps. He still has his D&D crap from HIGH SCHOOL - he will not get rid of it.

Ei said…
This may be my all time favorite post. They various stages of undress and disembodiement CRACK ME UP.

But you know what Barb? I found my Charlie's Angels lunchbox from 2nd grade on ebay yesterday...selling for $80 with days left on the auction. Dude, I so kicked myself for giving it to my niece who used it as a sandbox toy.

Who knew? Of course I don't think Ice Capades GI Joe with super small bladder would fetch much, but who knows?
February 18, 2008 at 6:28 PM

DK said…
"She turned me into a newt!"

LaDonna said…
Oh my goodness! I have to laugh because if my mother hadn't sold all of my old Barbies, I would probably still have them as well, also in "various stages of undress and dismemberment" to quote Ei!

Me. Here. Right now. said…
Um, your husband and I, I think, would bond over our GI Joes (I noted with interest that his fuzzy faced Joe also seemed to have had a razor taken to his face, just as mine had). I also have Johnn West figures of the same size - the Western version of Joe. I still have them - and the one the dog got which I thine wrapped in gauze and put in the stretcher that I still have to be carried by the other two Joes. Keep them. Everything elseyou can toss!
February 19, 2008 at 6:48 PM

MadMad said…
Those are hysterical! (Have you seen Arkie Mama's barbie/GI Joe p*rn? A photographer friend of hers put together some shots.... Very, very funny.)