Notes From the Road

Okay, so I have some hilarious travel stories to tell y'all but I'm sort of hampered by posting from a strange computer and without my usual photo software. Which means all of the photos I upload are ENORMOUS--and funny or not, that's fairly cumbersome.

But basically, so far, our vacation has featured some incredibly fabulous dogs.

Meet Violet: (Click on the picture if you'd like to enlarge it to the size of the Boston Terrier That Ate Manhattan.) 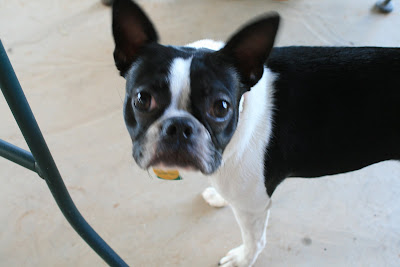 Violet owns our friends Robin and Wes, whose lake house we stayed at during the first two days of our trip. Her family is a lee-tle tired of hearing that she is "so ugly she's cute." And you know what? After spending two days with her? I think she's beautiful. Dog has the best personality of just about any dog I've ever met. AND SHE DOESN'T EVEN BARK MUCH.

The first two days of our trip were spent at a reunion of my husband's friends from undergrad. I could go on and on about the funny things that happened and the way everyone has such incredibly beautiful kids now and how my own children both drove the jet ski by themselves (!) but basically, I don't think it would interest you. Suffice to say that there was an 80's music soundtrack, we all stayed up way too late and drank a LOT and I felt so at home and comfortable with this group of people that I wore my dang swimsuit in public and didn't even think twice about it. I just loved the whole time we were there. And Wes and Robin? These are such good people that, although it crossed my mind, I didn't even really seriously consider stealing Violet when we left.

Yesterday, we drove to my brother Tom's house and had a belated July 4th celebration --because when we said we weren't going to be able to be there until the 6th, they changed the freaking date of their party to accommodate us.

Anyway, my brother is sort of... like the Dog Whisperer, only, well, without his own show on cable. He has these two dogs but the one who really captivated me was this dog named Jake. My German cousin kept calling him "Scout" and I realized that Jake is EXACTLY who Scout could be if we'd just take some time to work with him. (Which, granted, would be easier if he didn't pee everywhere the second we try to do ANYTHING with him, but I digress.) And Jake LURVES my brother Tom. Look at this: (Click to enlarge it if you'd really like to look up into Jake's nasal passages.) 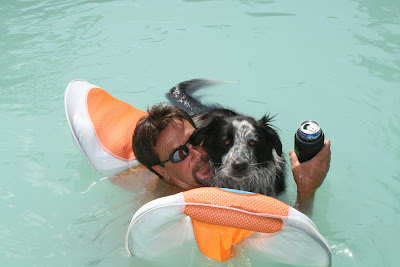 Then today, well... come a little closer so I can whisper... Today, my girls, my mom and I went to the Woolie Ewe where I had something of a falling down with my credit card. I started out rather strong--Coop gave me a substantial rebate credit card to spend and I gave the girls budgets of what I would spend on their behalf and then, I'm not sure what happened. Yarn fumes? At any rate, don't tell anyone but I, um, bought this unbelievable, amazing and expensive (shhh!) yarn to make a sweater. And also? I might have bought some Noro to make a felted bag for Ana. Now, move along, nothing to look at here...

Unknown said…
But you didn't show us the yarn. Ummm I want pictures of yarn.

Ei said…
Omigosh, the lake house of Robin, Wes and Violet sounds just like a better version of the Big Chill...you know minus the funeral, drugs and cheating spouses. But you know...(snort, ok I know).

Lynn said…
Woolie Ewe *is* a lovely shop; I've been there myself. My favorite is the Shabby Sheep, down in the State-Thomas area of Dallas. And there are two great shops in Fort Worth, Yarns Ewenique and Jennings Street Yarn.

Plano already has half of the money in Texas. Spread the woolly love a little farther afield, ma'am!
July 7, 2008 at 9:26 PM

Katie said…
Oh the woolieness of it all! I have wool-envy.