I am SO proud of myself.

But I will wait to tell you about it until the end of this post because it's a knitting thing and you non-knitters can just stop reading when it gets to the knitting part.

Last Thursday, I got to teach a writing workshop. You can just imagine how excited I was. I couldn't sleep the night before (which had SOMETHING to do with my husband snoring but for the purposes of this story, we'll just attribute it to nerves, shall we?) and I got up early to review my notes. I left way early and stopped and got some refreshments for the class.

Second graders are a tough crowd.

I THINK it went okay. Because Jane said, "This Thanksgiving, I'm thankful for YOU. Best Mom EVER."

Which made me catch my breath.

And then on Friday, she handed me an entire envelope filled with thank you notes (illustrated!) from the class. (Click on the pictures if you want to enlarge and read.) 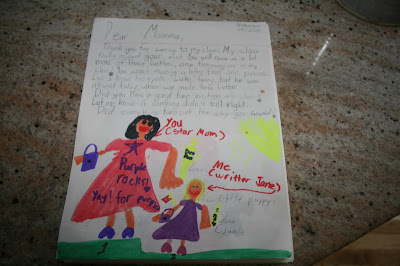 I am such a sucker for that. 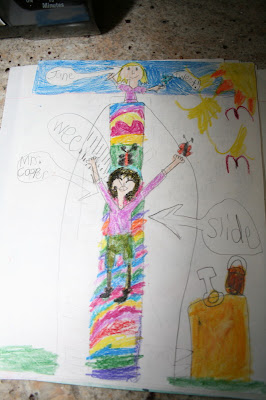 My favorite (other than Jane's letter) is the letter by the little boy who signed,"Fondly." 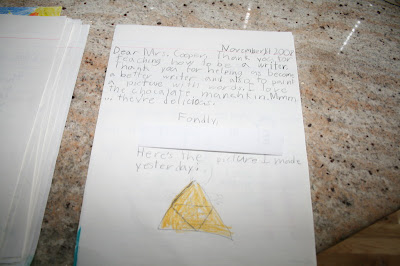 So, then we had this great weekend. For one thing, my friend-for-life Lin was in town and she made some space to see me, despite that fact that she had six million friends and family to visit. She stopped by on Friday night and then picked me up at 8:30 on Saturday morning because I was going to accompany her on a personal errand that involved...well...waxing her eyebrows.

I took my knitting, thinking I'd just be waiting around for her.

But I ended up getting my eyebrows done, too! For the first time ever. The woman did this thing called "threading" which I'm sure y'all have known about forever but was entirely new to me. I've never had my eyebrows "done" before.

But every time I pass a mirror now, I'm sort of...well, enthralled. I look so...

Well, I'd show you except that, true to form, I developed some sort of allergy to the wax the woman used and I have this... leprosy across my forehead. Because no good deed of high maintenance in my life goes unpunished, you know.

(I have ridiculously sensitive skin but only SOMETIMES. The last time something like this happened, my husband and I were still dating and we were about to go on a ski trip to meet this friend of his and his girlfriend-du-jour. This guy... he was just like CATNIP to women and he seemed to lack any sort of conscience that might make him, well, monogamous. So, I (even though I'd never met him) wanted to show him that sometimes the NICE GUYS got the hot babes (which, if you squint, could have been me.) For months, I worked out like...a woman possessed. Seriously, I was SOLID MUSCLE. I had WASHBOARD abs before I left on that trip. And also? Right as I was on my way to the airport, I went into a day spa and had my (non-existent) mustache waxed.

Only, the Allergy of the Damned reared its head and I spent the entire vacation with washboard abs and a red clown mustache.

Very classy. I'm sure he was very impressed.

(Well, okay, as long as I am digressing, here's what my refined eyebrows look like. 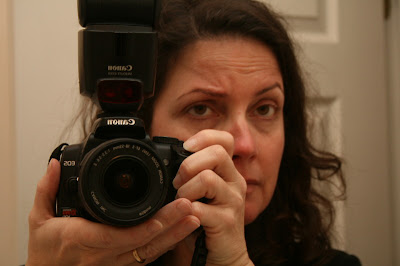 Well, kind of--it's ridiculously hard to try to take pictures of your own eyebrows. Most of the shots I took ended up looking like this: 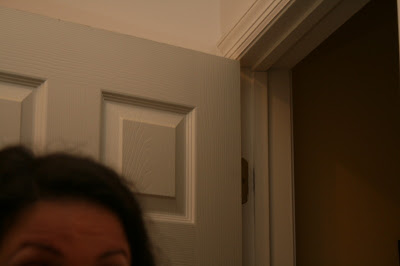 (Why, yes, that was two digressions in a row, including TWO pictures. Because I am a digression ARTIST. Other people can only aspire to that sort of digression level.) (Not to mention the ability to raise only one perfectly plucked and waxed eyebrow at a time. I know. I know. I'm GIFTED.)

Anyway, Lin brought me home just in time to greet my house cleaners.

Dudes, have I mentioned how much I love the house cleaners? Are you sure?

Because this time, they cleaned out my fireplace. Without me even asking.

I'm telling you, they know what is needed to take over the world. They took apart the toaster oven and cleaned the glass on it --it hasn't looked this good since I took it out of the box. I bow before them.

So, then my husband and my older daughter Ana (10.75) made chili, which was pretty darn messy but I didn't care, do you know why? Because the house cleaners are coming again this very next Saturday before my mom and dad arrive. Yeehaw! Go on, have a CATFISH FRY.

I don't know if I'm allowed to mention this in my blog because I keep forgetting to ask but my husband's brother and his wife had their first child last week. She is beyond adorable and gave me an excuse to buy this book: 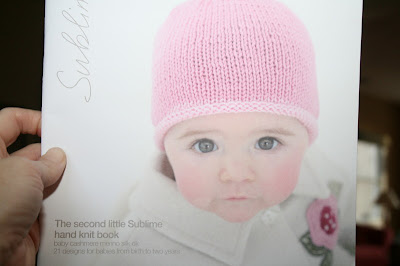 (Could the picture on the front possibly BE cuter? I could not resist.)
and then knit a baby hat. 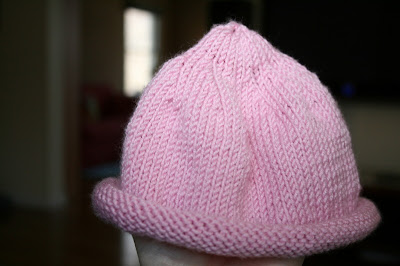 Which turned out pretty well but I wasn't happy with the seam. 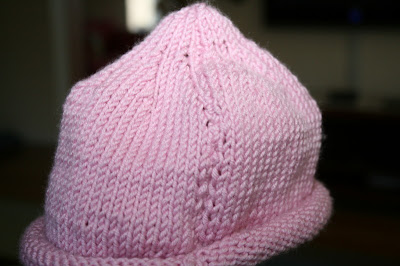 So, guess what I did? I cast on and knit the same hat IN THE ROUND. On double-pointed needles. I LOVE IT. 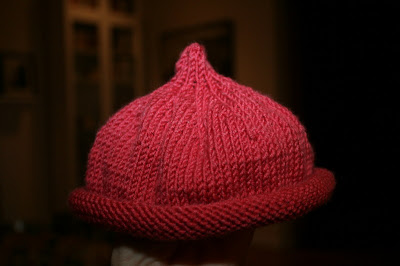 AND I knitted it in one day. AND, I only said the F-word once when all of the stitches dropped off of my stupid metal DPNs. (I didn't have the size I needed in bamboo needles.) SO, I will be sending two hats off today to the lovely Hallie Belle and may she wear them in good health should the weather in LA ever actually get cold enough to need them. 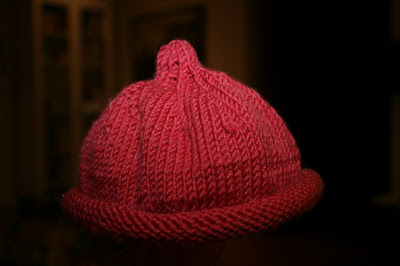 In other news: we had snow flurries this morning. You can sort of see them in this picture: 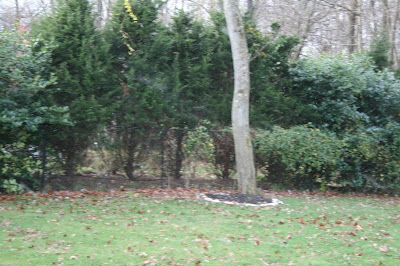 Jane bounded out of bed to see them and then turned to me. "Mom, it's like God gave us a PRESENT."

I should knit her a hat.
Email Post
Labels: deep thoughts gratitude Living with Writers Not enough therapy in the WORLD OCD? Not me. parenting the Glamah of it All The World According to Jane

absolutelytrue said…
Love the hats... love them. Can I have one next? Not for a baby, but for my own head?

Also, I have to say, I love the perfectly groomed eyebrows. I have a tweezing fetish of sorts. I figure if one part of me can be super skinny, I'm gonna go for it. So I tweeze and tweeze. The wax makes me bleed and I've never been brave enough to try threading.

Off on another tangent.. I fell victim to a "as seen on tv" thing for hair removal.. the smooth away system. Not for eyebrows, but hair removal in other areas. I'm anxiously awaiting the arrival of my kit that was ONLY $19.99 (plus exorbitant s&h fees).

LaDonna said…
Wow! What an action packed post. I love it :)

The letters from Jane and her class...those kids know how to make you feel loved, huh? I love the line in Jane's where she wants to know if anything "didn't feel right". Makes me wonder a bit...ha!

The eyebrows...yep, I've heard of threading, but never seen it done or had it done. I'd always heard is was supposed to NOT be painful. I guess they lied.

Your digressions...I bow to your powers of digression.

The knitting...no, I'm not a knitter, but I read your knitting posts anyway just cuz, well, cuz you wrote them, I guess :) The hats are adorable and congrats to your BIL and his wife!

The snow...isn't it funny how the first snow is always a gift from God but when it's still hanging around in late March we just wish it would go the hell away!
November 18, 2008 at 11:24 AM

Marion Gropen said…
Love the hats. And kudos on the writing class. In my experience, kids are a much harder audience.

I'm doing a class for my daughter's school Thursday morning that I'm moderately freaking about. But first I have to teach a web-seminar tomorrow afternoon. THAT I'm not sweating. And it's much harder stuff (combining finance, editorial work and marketing in order to publish better books and make more money -- all in 45 minutes. With spreadsheets. Talk fast? Me? Nah. )

MadMad said…
Those second graders are darned lucky to have such a talented writer help them out! You are so darned funny.

DK said…
Jane is far too precious for words. I especially love that she got the quotations right on "Luke". And the part about "Let me know if something didn't feel right." I know she's only in second grade, but the moment the words "What's that like for you?" come out of her mouth, I'm stealing her and sticking her in a psychiatry residency (I'm going to get one of those girls into the business, I'm sure of it). She's a natural.

My friends back home used to go threading. Your eyebrows look lovely.

Unknown said…
i love the little point on the tip of that hat.

Miri said…
"Digression artist." You are such a good writer. And those second-graders were LUCKY. Any chance you coming out to my area to teach a workshop?

Ann in NJ said…
Those hats are just too cute. I might have to borrow that pattern, as my sister is expecting in March.

Sherry Sea from Austin said…
Those are cute hats! My latest knit-story is a disaster. I got somehow persuaded by the ladies at Hill Country Weavers to buy this feather-light and extremely expensive cashmere for a class in knitting a lace collar. I cannot handle that damned pure-air cashmere to save my life. It floats off the needles. Never again.
November 19, 2008 at 7:14 AM

Karen said…
Those thank you notes are awesome. So are the hats, and the eyebrows too. If I had enough eyebrows to get done I would want them to look like yours. I need to try the circular needle thing so I can knit baby hats. You give me hope!
November 19, 2008 at 6:14 PM