Wow, the Day of Fall Happens Here, Too

I've written before about the Day of Fall that we had when we lived in Texas. (Basically, the Day of Fall in Austin is the one day when all of the leaves (which had turned brown in July due to lack of water and an abundance of foliage-searing heat) suddenly fell from the trees, as if the leaves suddenly got the memo stating that it was time to change seasons. It's pretty much the only fall we got there and if you happened to be out of town, you missed an entire season. Bummer, that.) And I've written before about how enamored I am of the fall season up here in the Northeast, now that I've experienced the fancy dress ball that constitutes the turning of the leaves up here.

Since they seemed so vastly different in their approaches to fall, I didn't expect the two parts of the country to have much in common season-wise, especially when I've always said that Austin has two seasons: Hotter than Hell and Road Construction. Imagine my surprise to find that New York has a Day of Fall, too. (I think maybe it means the END of fall up here, though, and isn't so much an entire season in one day.)

My backyard on November 1 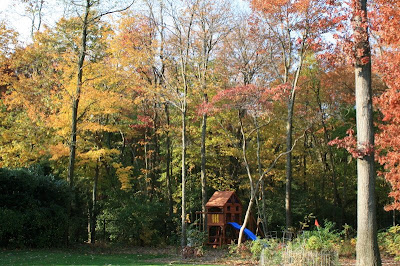 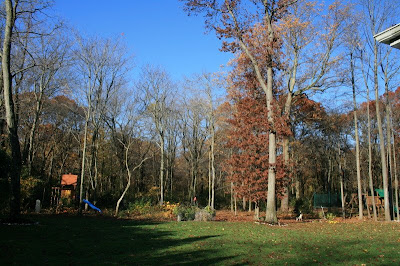 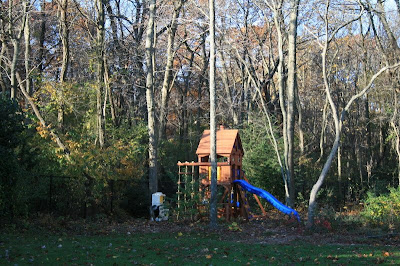 Maybe there is a SEASON called fall, (which in New York has this glorious turning of colors and in Texas is really just an excuse to watch college football) and then there is the ACT of Fall. And the ACT of Fall is universal. No matter what part of the country you live in, the leaves are going to all fall off of the trees all of a sudden, leaving the trees looking oddly naked and vulnerable.

I feel a little wistful about the onset of winter, actually. All summer, we've been surrounded by all of this green --this lush foliage. We've enjoyed our garden so much. We watched Jane's tiny sunflower seeds turn into enormous sunflowers. We ate cucumbers and tomatoes and bell peppers fresh from our own yard --I'd never experienced that before. And then fall arrived, bringing a feast of colors and new bounty from the land as we went pumpkin and apple picking.

Now, everything is dying back. The sun sets at 4:30 and I feel this primal urge to make soup. I'm putting the tomato cages in the shed and thinking about laying in more firewood. (And wishing I was a faster knitter. Dudes, we are really going to NEED mittens, hats and sweaters up here--and soon!) Suddenly, books like Little House in the Big Woods become guides for preparing for the long winter--you know, when we'll have to hike five miles through waist-deep snow to our nearest neighbor and tap the trees to make our own syrup...

It's interesting that there are these necessary losses that come with each shift of season but that it's all just part of the rhythm of the earth. Somehow, living in Austin, it was easy for me lose touch with the natural progression of the cycles of death and rebirth--and that each season contains its own beauty and blessings.
Email Post
Labels: deep thoughts Farmer Barb Homegrown Tomatoes knitting My Purple Thumb small things The Great Cooper Move what makes a life

Anonymous said…
So what kind of soup? You'll know you are a real Northerner when you can't stop yourself from making winter vegetable soup. Nothing beets a good turnip!
November 11, 2008 at 12:14 PM

Kathy Ireland said…
And don't forget the most important piece of winter equipment that you'll be needing. The Toboggan!! Oh my, you will definitely need one. Don't spend money on an expensive one either. A simple "snow dish" (I think ours was $5 about 10 years ago and it still flies!). My absolute favourite winter past time - heading out after dinner on the nights that it is very cold (but dry) and the whiteness of the snow makes everything appear bright - going to our local hill and tobagganing and screaming until we are so cold we can't stand it anymore. Even though it's getting harder and harder for me to climb back up the hill - I still love it. I just know you will too. And then - coming home and hanging all the wet mitts and snow pants in the bathtub and making a steaming cup of hot chocolate with real whipped cream.

Anonymous said…
I like to refer to it as the season of edginess and chronic ennui (hahaha). I've been knitting mittens too! Oh, and soup. I've made two batch of escarole and meatball soup. I don't know how to make small quantities so we wind up throwing away about a third of it. But by then, we're sick of eating it anyway. Happy Fall!
November 11, 2008 at 1:16 PM

Suna Kendall said…
A lady I know posted on Facebook yesterday that she was enjoying her favorite day of fall: the day all the ginko leaves fall off at once, leaving beautiful yellow circles on the still-green grass. That really evoked memories of Illinois for me.

Marion Gropen said…
Well, this year everything dropped at once, 'cause we had those winds. Some years, it's a little more gradual.

One of the pleasures of winter here is the sprouting of the first bulbs (usually snowdrops, mini-irises, crocuses and glory of the snows). And the flowering of the hellebores (aka Lenten or Christmas roses -- but watch out, they're poisonous) and of camellias. Some will flower all winter. Somehow flowers in snow are special, as are those tender sprouts coming through the ice. Welcome to the wonders of seasonal gardening.

(And learning to tolerate the depredations of squirrels. Yes, those ARE my teeth you hear grinding.)
November 11, 2008 at 1:30 PM

Stefanie said…
In San Antonio we kind of had fall last week - but it's summer again and I think it was just pulling our legs last week. Here's hoping I get to wear something warm (A jacket, maybe?) on my birthday next week! (It's the only think I really ever wish for every year, and Texan Life has consistently rebuked it. ;) )
November 11, 2008 at 3:05 PM

ccr in MA said…
My first year in my condo, I was constantly surprised by how the changing seasons changed my view. "Good heavens, there's a house up there? And it's bright yellow?" It's amazing what the trees, or rather the leaves, hide.
November 11, 2008 at 3:08 PM

Miri said…
Wistful. That is the word of the week for me.

I hate to tell you this, but it just is plain old cold and gloomy til may in NY. Although when the snow comes it is so beautiful and you have the perfect sledding driveway!!!

MadMad said…
I always forget just how drastic it is - we can suddenly see right into our neighbors yards, when the day before it was like a wall of green. And of course now we have to rake them up, too!
November 11, 2008 at 8:44 PM

Anonymous said…
We had the day of fall just a couple of days ago.

I've always said that the two seasons of Texas are Hot and Christmas. Note that, sadly, one does not exclude the other.
November 11, 2008 at 10:35 PM

Suburban Correspondent said…
Winter is wonderful - time to hibernate and drink hot cocoa and do crafts and knitting with the girls and generally recharge for spring. Which does not start showing up in your neck of the woods until mid-April (sorry).
November 11, 2008 at 11:26 PM

Lynn said…
Winter in NY? Yes you WILL be cold!!! But you will have a longer cold season in which to wear all the wonderful knits you have made. Use bright yarns. Some weeks this will be the only bright spot you have. Plus its easier to find you if you pass out in the snow!
November 12, 2008 at 9:56 AM

Sherry Sea from Austin said…
Dark at 4.30 is bad, but I'm reminded of a Brit poet, I can't remember the name, who described the winter sun as moving 'crab-wise' in his country. The good news is that winter = dark = solstice holiday of some kind. It's Christmas for me, non-believer though I be. Christmas is beautiful because it comes in the middle, we fill it with light-making things, eat truffles like pigs and drink like sailors. The cold is somehow necessary. Christmas in Texas is an iffy thing. You never know when an 80 degree hot spell is going to rob you of the mood.
November 12, 2008 at 6:51 PM