In Austin, which is part of the Bible Belt (sort of shocking since the people in Austin are all about tolerance and laid-back, aging-hippy vibes), the schools have opted to not allow Halloween costumes on school grounds. (They don't want to be accused of glorifying SATAN or anything.)

You can imagine our surprise and delight to find that the schools here are WAY into Halloween. I mean, WAY. Each of my daughters' schools had a parade and a Halloween festival. (Of course, unless you were volunteering, you couldn't actually GO to the Halloween festivals. Since I'm so gimpy, I couldn't help out but the girls gave me glowing reports.) All of the teachers and staff dressed in costumes.

The parades were great. That's one thing about our new area: people here turn out in force for any kind of school function. My husband went to Ana's because I knew it would be very crowded and I'd not be able to walk to where the parade was being held from where I had to park. (Which, you know, was sort of an eye-opener to me and made me realize that maybe I need to face the fact that I need a handicapped parking sticker. More about that after I finish my bout with Denial.)

There were a lot of people. 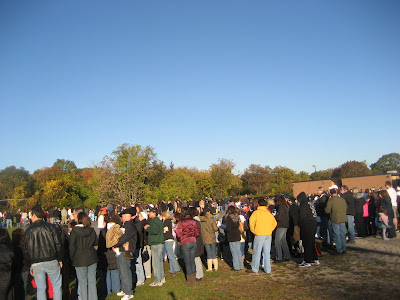 It was really cold, too, so Ana had to wear a big coat over her costume. 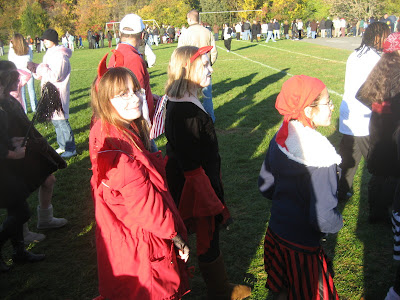 Which was a shame because she LOVED her costume. In case you can't tell, she was a devil --and for some reason all of the devil costumes in her size had fishnet hose and really short skirts. I tried to suspend my prudish motherly outrage after I saw her innocent joy. (But...sheesh.) (I actually bought some long-johns and offered to dye them red for her. She looked at me pityingly. "Mom," she said, "Those have HEARTS on them." Like, as IF.)

Of course, it doesn't help that my husband saw THIS picture of her 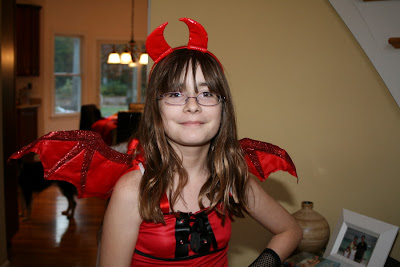 and said, "We'll go to visit her at college and she'll be going to classes and on dates and she'll look exactly like that."

(Maybe with fewer horns but I get his drift.)

I went to Jane's school for her parade and avoided the whole parking and walking issue by just sitting in my car after drop-off and knitting until the parade started. Her parade even had a BAND leading it! Oh, look, they're dressed as disgruntled teenagers! 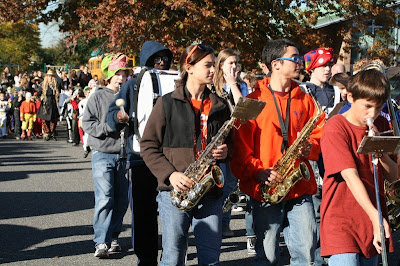 They played the Munster's theme song. The kids were ADORABLE.

Especially this one little angel: 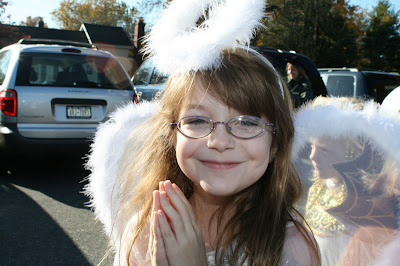 (A mother of one of Jane's friends said that she had called out to Jane, "Hi, Jane!" and Jane had answered, "Bless you.")

Once home, the girls had the classic battle between good and evil: 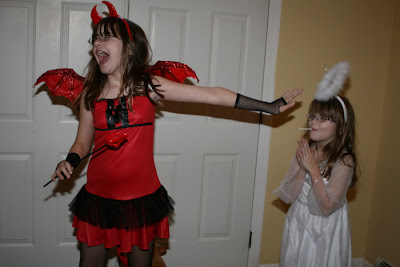 A good time and much sugar was had by all.
Email Post
Labels: A picture is Worth at Least Ten Words family foot humor? Kids Say the Darndest Things love The Great Cooper Move The World According to Jane what makes a life

Anonymous said…
OMG, Barb! They could NOT be any cuter. Seriously. Even the devil looks angelic! One of the men at work was complaining because his 12 year old was going as Raggedy Ann, and he claimed tha that the shorts were too short, and the striped socks made her look like a hooker. I told him to look away...
November 2, 2008 at 5:59 PM

Sherry Sea from Austin said…
Barb, you're an example to us all. If I had the teeniest excuse for a handicapped sticker, I'd shamelessly put my name in the hat for it. It takes every ounce of virtue I have not to park in those achingly open spaces.

The girls looked so adorable, i wish i could have been there to see them in person. (next year call me before the halloween parade and i will let you in on a secret parking spot which gets u pretty close to the parade!!!) Congrats on selling the austin house, what a big burden taken off your back. miss you

DK said…
Wow. Wow. They so could not be any cuter. That's awesome.

Why in the world would all the costumes for anyone Ana's age be all whorish?? What IS the world coming to these days? That's a little disturbing...not that she doesn't look hell for cute (ha ha ha).
November 3, 2008 at 5:12 AM

Anonymous said…
if it is just one bad foot, try one of these, they rock!
http://www.kneewalker.com/?gclid=CMKSwa2U2ZYCFQwuHgodexen3A
November 3, 2008 at 8:54 AM

I know what you mean about Ana's costume, though. I started having the same problem with Paige about 2 years ago (when she was 10!). Anything that was big enough to fit her was in the "teen costume" section which meant skimpy skimpy skimpy. YIKES!! What happened to cute girl costumes that are at least a little bit conservative.
November 3, 2008 at 11:35 AM

Karen said…
I understand what you mean about the handicapped parking tag. My Mother has problems with her knees and dreaded going to the grocery store and having to park too far out. She finally broke down and asked the doctor about it one day and he made her a tag right there on the spot. I got a call from her in the parking lot crying because while she was okay with the tag she was not okay with the fact that there was no expiration date and her tag was PERMANENT! I tried to comfort her but it was hard. So just a heads up that since there is no definite end to your foot problems you might want to be prepared to see that you are permanently handicapped on your tag. And I promise it helps and you will laugh about it one day!
November 3, 2008 at 1:04 PM