Jane was a lee-tle excited. As in, she got up, put on a dress and party shoes and started asking, "WHEN IS MY PARTY??" until, I swear, I was willing to let her start the party before any guests had even arrived. "Here's the cake. I'm taking a nap." (Just kidding.)

So, early on, it was time for one of my favorite Cooper traditions. Coop gave Jane roses --because he wanted to be the first man to bring her flowers. (He did this for Ana, too, after my good friend Linda gave us the idea.) (It's a relatively new family tradition.) (And, um, it may have occurred on Saturday just after I'd been to the grocery store.) (But it's the memory he's making for the girls that counts.) (So, hush.) 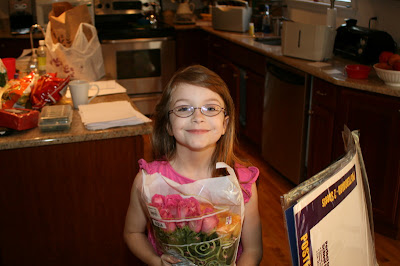 I had made the cake (see part one and part two for the recipe and The Secret) the night before, but I still had to frost it. Jane wanted a Webkinz-themed party so here is my version of a Webkinz cake: 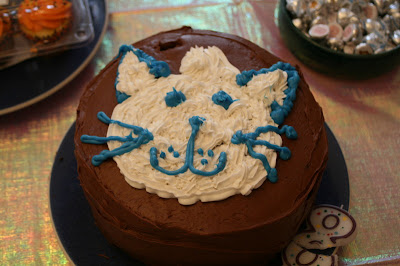 And then, deep sigh of sheer bliss, the house cleaners arrived. You know how I couldn't really define how I felt after our house in Austin finally sold and closed? Well, I was a little sad. But, dudes, the first call I made was to our incredible house cleaners and you can bet your sweet bippy that I put them on the payroll! YEEHAW! I can't afford to have them come every week but they are SO coming every two weeks. And I? Well, I think we can safely say that I am over my Selling Austin House Mope. (I love the house cleaners. I want to wear T-shirts proclaiming my love for them. I might have to bake them a cake. Seriously.)

They left three hours later. (Three. Hours. And you could have performed surgery on any surface of my house.) (Have I mentioned how I love them? You sure? I'm thinking about writing a poem.) I had just enough time to shower and change before the guests began arriving.

It was a smaller turn-out than expected, which was a little disappointing. I'm used to giving huge free-for-all kinds of parties. Luckily, I had hired my babysitter, who I found when she was a Counselor in Training at the kids' summer camp and she was ALL OVER keeping the kids moving, even when they went through my planned activities in record time. 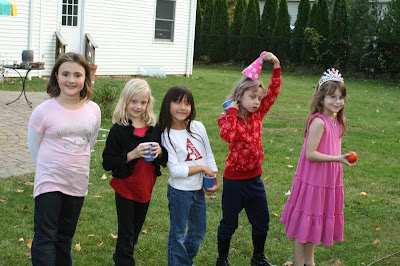 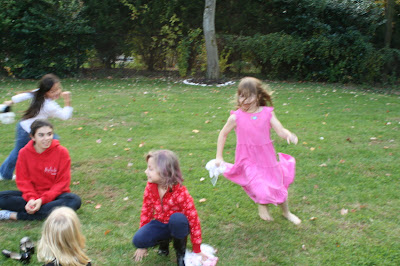 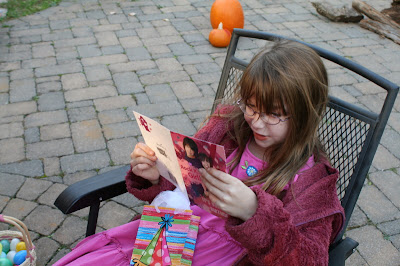 Jane opened her presents and one of the little girls said, "Oh, FINALLY!" because in New York, kids don't really open the presents at the party, even though the kids really like to see what the birthday kid got.

Then each girl received a goody bag: 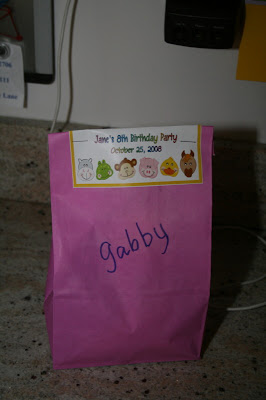 and the party was over.

I think at the NEXT party, we'll have a little better turn out because each goody-bag contained some chocolate and a Lil Kinz. (Dudes, I have to establish my reputation SOMEHOW!) The girls left saying, "This is the best party ever!"

I loved hearing that but you know what? I'm just getting started. Look out, New York!
Email Post
Labels: cooking non-blog I heart New York Jane parenting subversive The Great Cooper Move The World According to Jane

Miri said…
If they don't open presents at the party (yeah, becca and I are stuck on this) how does the birthday girl get to ooh and aah in front of the guests? This is the best part. My kids like to rehearse the oohs and aahs.

I LOVE YOUR CAKE! Are you taking orders? Did Jane love her party? She looks so cute. And so... EIGHT.

That's weird, the not opening gifts at the party thing. Although, you know...I can see the merit of it. Not so much for kids' parties, but particularly if it also applies to things like baby showers (oooh! Another onsie! Wow! It's just like the last thirty-seven you opened!).
November 3, 2008 at 8:48 PM

MadMad said…
OK. Wait-wait-wait. You paid for cleaners to come BEFORE the party of 8 year old little girls eating chocolate cake?! That is SOOOOO living dangerously. But happy belated birthday to Jane! Glad she had a great party!
November 3, 2008 at 10:06 PM

Marion Gropen said…
You rock as a "cool mom." I loved seeing the ideas you had for a party. (May I steal some of them for my 8 year old?)

Yup, here in NY, you do NOT open presents at a kid's birthday party, and yes, it weirded me out, too. But it does keep the littler kids from getting jealous, and it also keeps the mess and breakage down, so it tends to start there, and continue on to the older kids. Or so I have surmised.

Since I'm asking to steal some of your ideas, I should probably share some:

--ice cream cupcakes. These are easier to make than any other kind of cake, and are guaranteed to nominate you for "Best Party."

--Rhode Island Novelty for goodies to go in the goodie bags. Great variety and great prices.

--Oriental Trading/Hands on Fun for things to give out, and for craft kits to occupy the kids when they're not running and making noise.

--Shindigz and M&N International for decorations.

Anonymous said…
That looks like a rocking great birthday party! I wish I had been there. Have I mentioned how adorable the birthday girl is?
November 6, 2008 at 9:26 AM