Friday is for Fun

I can't resist posting these photos, even though I know my husband is going to be crabby at having a post devoted solely to pictures of him.

I can't help it. It's either that or launch into a rant about how ridiculous medical insurance is and how it's ruining medicine in this country. I went to pick up some medication for my daughter, Jane. It's an antibiotic cream that comes in 5 oz and 15 oz tubes. So naturally, my insurance covers the (non-existent) 10 oz tube. To get the 15 oz tube, which was the only size carried by the pharmacy, it would have been $115. Luckily, this is not an emergency and we can wait until Monday, when I will go back to the pharmacy to purchase TWO 5 oz tubes, which the pharmacy had to order, and when my co-pay will be $20. It's INSANE to think that there are people all over the country who don't have the option of waiting and who will be forking over the money they would ordinarily be using for FOOD to subsidize the stupidity of the medical insurance system.

Sorry. That just slipped right out.

Here, look at this photo. It's what I saw this morning as I was getting my coffee. 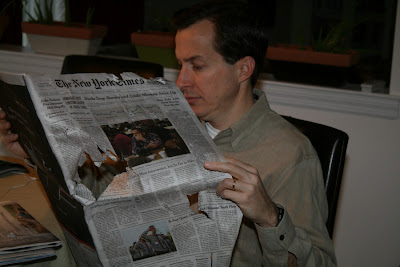 I laughed out loud. Which was good because then I had to take Ana to the doctor where we discovered that she most likely has another collar bone fracture--this time on the left side. You will recall that she broke her RIGHT clavicle in January. You might also remember that I didn't, um, respond that well when she went back to school. Right now, I feel like an idiot because she's been complaining about her shoulder for almost a week and I just now finally took her in.

Here, look at Coop reading the paper after Scout has fetched it. 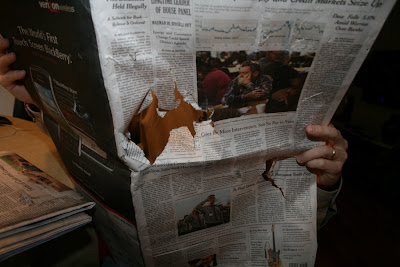 Last night, I made the decision that I can no longer drive at night until my funky eye-spot heals. I've just had too many near misses to risk it further, especially after my daughter Ana and I saw a grim reminder yesterday of how dangerous it is to drive here, even with normal vision. We came around the corner one street over from our house and saw this SUV lying on its side, the windows broken and a lot of children's paraphernalia strewn all about. We quickly said prayers that no one was hurt in the accident because, dudes, it looked really bad. So, I decided to do the mature thing and not put anyone at risk. It's sort of an issue now that it gets dark at 4:30, but hey, these are things you have to do with you're eighty years old. Oh, right, OR when you're 43 and falling apart.

Look at the cute husband: 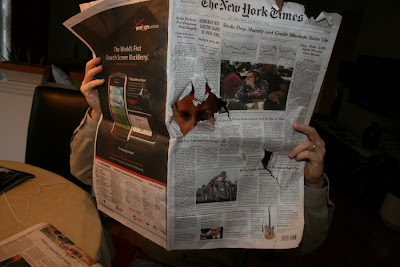 I'm glad it's Friday.
Email Post
Labels: A picture is Worth at Least Ten Words Ana guilt love My Life is so STUPID parenting

LaDonna said…
Wow, Ana broke her collar bone AGAIN? How in the world did she manage it a second time? Poor kid!

And as far as Coop goes, tell him that you HAVE to devote at least one post a month to him or something having to do with him. Otherwise, your readership starts to think the too-good-to-be-true guy you keep talking about is all in your head ;)

Hugs! (Oh, and stop with the mom-guilt already! I think we all do it. I know Marissa keeps complaining about her heels hurting, but it only seems to be when I ask her to do something she doesn't want to do! Watch, she's going to have something major wrong when I finally take her in to have them looked at.)
November 21, 2008 at 1:41 PM

Unknown said…
yeah my son's immediate response when he doesn't get his own way or when we ask him to do something he doesn't want to do (like get dressed) is "my leg huuuurts." if they're going to cry wolf, they are going to get their real pains ignored. right?
having said that i hope she heals quickly.
November 21, 2008 at 2:32 PM

Barb Matijevich said…
Well, in January when she broke the right one, the x-rays showed that she has oddly shaped collar bones. (I'm sure that should surprise no one, given that I am her mother.) I think maybe they're more fragile because they are more "bowed." But we don't know yet for sure that it's fractured because the doctor didn't send us for x-rays because he said that knowing it was broken wouldn't change how we treat it--which is to put it in a sling. If it's still hurting as badly or worse on Tuesday, I'm going to take her for the x-ray because I think it will change how the school makes accommodations for her.

And this should also come as no surprise considering I'm her mother, she has no idea how it happened.

As for mother-guilt, on Wednesday, Jane fell down the stairs at our house. I managed to even feel guilty about THAT because she was wearing footy pajamas that were too big for her and she tripped on them. Guess who bought her the over-sized pajamas?
November 21, 2008 at 2:34 PM

Unknown said…
PS: I am sure scout was just ripping out the part about the bad economy because he didn't want you to stress out any more, right? good dog...
November 21, 2008 at 2:36 PM

DK said…
Oh, those are the funniest pictures I've seen...well...since your last post about Scout. That's hysterical. I'm glad Coop is maintaining his sense of humor about Scout's fetching abilities...

I also find it somewhat amusing that Ana has no idea how she broke her collar bone. It'll be funnier in a few years. And no, it surprises no one that YOUR child has funny-shaped bones. But maybe if she breaks them now, and they heal better....

Eh, Jane'll be fine. I fell down the stairs four or five times in the house I grew up in, and, clearly I'm fine.

Ann in NJ said…
You know you love your dog when you read AROUND the holes in the paper.

We all have mom-guilt. My mother made me wait 3 days (and go to a piano lesson) when I was 10-ish and hurt my finger skateboarding. Yes, it was broken. And that was a generation ago.

She'll heal, and perhaps they can give you advice on how to avoid it in the future? Not that it will help because she doesn't know WHAT she did that she should now avoid.
November 21, 2008 at 5:20 PM

Sherry Sea from Austin said…
I don't know. I'd probably have to fire Scout if he wrecked my paper, but he's awfully cute. Husband's not so bad, either.
November 21, 2008 at 7:11 PM

Anonymous said…
Poor Ana! Coop seems like a good sport. Imagine if that was a knitting book the dog bit a hole it. I shudder at the thought! Hope you have a great weekend reuniting with your parents!
November 21, 2008 at 7:11 PM

knittergran said…
Skip the guilt. My father's husband was a doctor but yet my husband spent over a week complaining about an arm that really hurt. When he just happened to be at the hospital when his father had to run in for a few minutes, he stood behind the fluoroscope machine (don't know how to spell that) and his father realized that his arm had indeed been broken. However, since he was a kid and kids' bones mend quickly, it was too late to do anything about it.
You and most of your readers are too young to know this, but when I was a kid, even shoe stores had fluoroscope machines. We would try on shoes and then stand under the machine so we could see if our toes were the proper distance from the ends of the shoes! I'm still waiting for foot cancer.
November 21, 2008 at 8:10 PM

Anonymous said…
Funny paper! So sorry to hear about you daughter and her broken bone. Well wishes to her. I hope it heals quickly. You're right, insurance companies stink.
November 22, 2008 at 12:38 AM