We got back from our spectacular family vacation at Woodloch Pines on Sunday and it's been All Reality, All the Time ever since.

Monday, I came downstairs for breakfast.

No one offered me a cup of freshly brewed coffee. Nor my choice of juice and/or sliced fruit. No offers of my choice of those little boxes of cereal or oatmeal. No one perfectly poached my eggs and served them to me with thick-sliced bacon and dry toast--just the way I like it.

There were no refills.

No one but me to make the mutually exclusive meals for my daughters. (Note how Ana eats all but the crusts on her toast and Jane eats only the crusts. Jane eats the eggs; Ana eats the bacon.) (Why, yes, I'm totally okay with this dynamic that happens at every single meal every single day. I'm sure after they leave home for college and I have a long rest in the padded room of my choice, this twitch should disappear.) 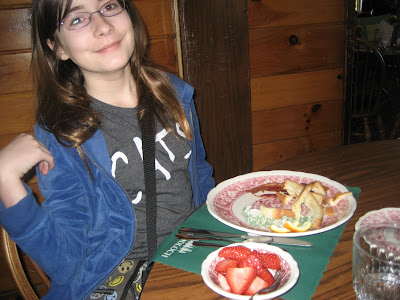 When I returned to my room, no one had miraculously made my bed and emptied the trash and left me fresh towels.

The morning's activities consisted of me dragging two surly children to the grocery store and then unloading a van full of groceries by myself. Also? Seven loads of laundry and the deflection of many, many, many requests to go to Michael's.

At no point did I consider calling the spa and getting a massage.

At no point did I leave the kids at the bumper cars and the indoor jungle gym and go work off my Scandinavian Pancakes in the fitness room. 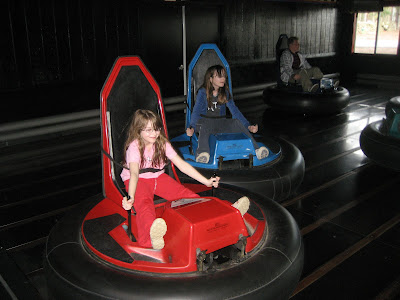 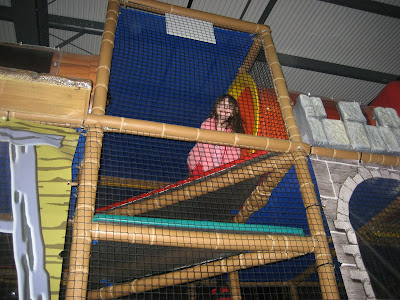 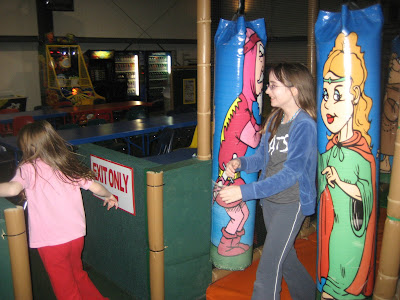 By the time lunch rolled around, I was starving and instructed my children not to talk to me until I had eaten something because I couldn't be trusted to be fair and rational in my response.

Only, there was no waitress to offer me my choice of sandwiches, or seared Ahi Tuna on a bed of greens or something from the bar.

(There is a serious lack of home fries around here.)

After I ate my nuked Lean Cuisine (yum), I started on the afternoon's activity: Namely, finding the horrible toxic smell in my refrigerator. This seemed a far cry from attending a beading class, fishing (Have I told you all that Jane is obsessed with fishing? She woke her father up one day saying, "Dad! It's light outside and we could be fishing!")playing miniature golf and/or riding bumper boats. 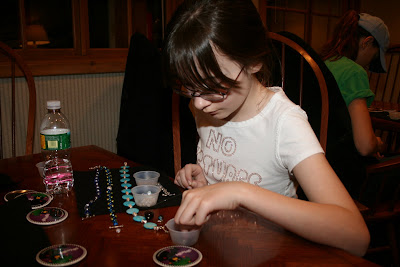 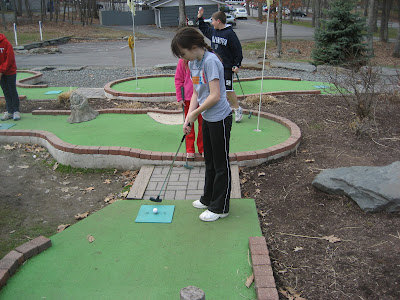 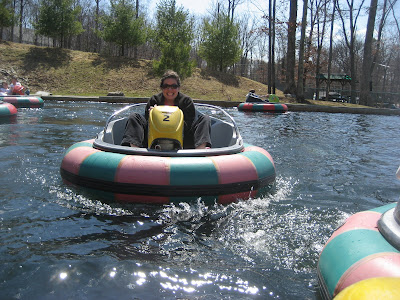 I did tour my own kitchen, which took exactly 30 seconds and involved tripping over a pride of orange tabbies that materialized out of nowhere. I feel certain that Woodloch has a "No Orange Cats Allowed" rule in its kitchen, judging by the lack of cat hair and the fact that I could have had my appendix taken out on any surface in the place without risk of infection. 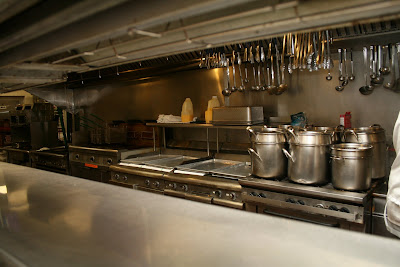 But back to reality: There was no amazing "theme" dinner, complete with parade of costumed characters. 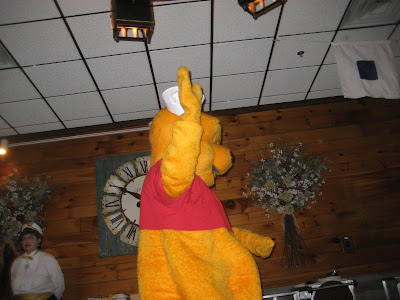 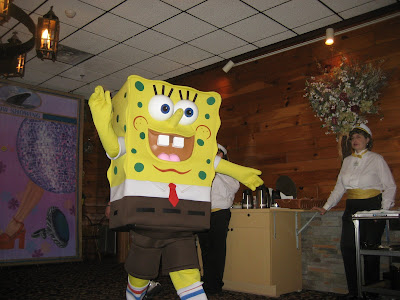 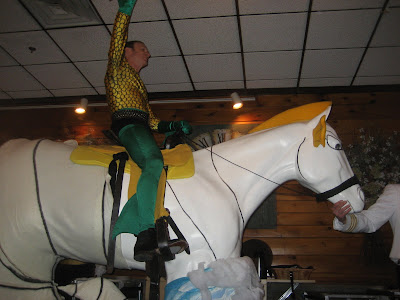 In fact, there was no evening entertainment at all, unless you count the verbal sparring as I tried to get my kids into the bathtub. No fun family activity like horse races or magic shows. (We did, however, have Jane to weigh in with one of her particular talents.

Why, YES, I did just use a You-Tube video in a parenthetical phrase. I TOLD you people I was gifted at digressions!)

(Here's another: This is Jane melting down about the UNFAIRNESS OF IT ALL after Ana got a hole-in-one playing miniature golf. No sibling rivalry here, no sirree.

No one offered to take a family photo of us all dressed up. In fact, oddly enough, no one really dressed for dinner. 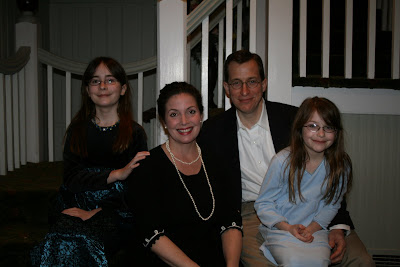 I don't know. At some point it occurred to me that we might MOVE to Woodloch and I could get a job teaching knitting classes --except that I'm really not that great of a knitter so I might not be able to support my family. It's very tempting because the staff at Woodloch LOVES it there. I can't tell you how impressed we were by the total commitment of the staff.

On the other hand, at least I control the music at home and hopefully it won't lead to me having two consecutive dreams about Lional Richie as happened at Woodloch. Still, small price to pay for the sheer awesomeness that was our family--emphasis on family--vacation.

To make myself feel better about the return to reality, I did make these last night: 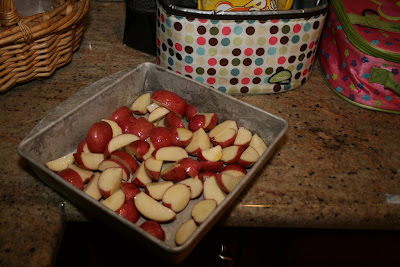 MadMad said…
Ah, they're homefries! Very cool. And what Becca said. And Heather. But also? Wouldn't our lives be so much easier if that pasta man moved in with us. If he can cook AND keep a clean kitchen, then hey, that's all I really need in a man. Well, supermarket, too, if that's not too much to ask.

Alrighty. Off to wash the crystal from Easter. It's still there because no magic Woodloch person came by to clean it...
April 15, 2009 at 1:44 PM

Anonymous said…
Welcome back to reality! It looks like you had a great time. My husband can't bribe my daughter (or me)enough to get up early and fish with him...tell your hubby to be so grateful.
April 15, 2009 at 7:49 PM

kim said…
What a great vacation! For some reason, the thing I found most endearing is the way your girls eat toast totally opposite. That and the crazy eye trick. I watched it twice! Mad skillz on that child!
April 15, 2009 at 8:48 PM

Ann in NJ said…
Friends of mine went to Woodloch Pines a few years ago for a family reunion and RAVED. Glad to hear you had a similar experience!

Ann in NJ said…
(and as an aside, I cracked up when Jane said, "and she called me a crybaaaaabyyyyy...sniffle, whine, cry..." I'm sure it was funnier on video than in person, but it's moments like those that test my ability not to laugh out loud at my own children when they say things like that.)
April 16, 2009 at 10:03 AM

Sherry Sea from Austin said…
Barb, now I need for you go on a cycling and wine tour of France's Loire Valley, using your skills with a video camera to make it look like the kind of holiday any 14-year-old -- particularly my 14-year-old -- would die for. Glad you had a great vacation!
April 16, 2009 at 10:52 AM

LaDonna said…
Oh, Barb! Looks like you all had a wonderful time!! That place sounds like a little slice of heaven on earth :) Too bad you had to come crashing back to reality.

Is it bad that I'm a teeny bit creeped out by Jane's eye trick? The girl is seriously adorable, but that made me go EWWW!!

Dragging the kids to the grocery store...well, just wait another year or so. The rush of liberation you will feel the first time you can walk to the door, tell Jane that Ana is in charge, and just GO. It's like a mini-vacation all it's own!
April 17, 2009 at 1:08 PM