Last night was the parent orientation for Middle School. I had to go because, theoretically (I may or may not believe this), I have a daughter old enough to enter Middle School next year.

I was standing in the front, collecting pamphlets and paperwork when a woman I know slightly came through the doors, looked straight at me and said, "Good GOD! I just aged ten years by walking through that door."

Truer words have never been spoken. We commiserated on the fact that we're pretty sure there is no way our kids could possibly be old enough to go to MIDDLE SCHOOL.

My daughter Ana (11, who may or may not be almost a Middle Schooler depending on what you believe. *I* believe I just brought her home from the hospital YESTERDAY.) took part in the NYSSMA piano competition on Tuesday. I am sort of philosophically opposed to things that promote "competition" in the arts as a rule but in this case, it was a chance for Ana to practice playing in front of a stranger who accorded her a score based on her performance of a musical piece, three scales and sight-reading. Ana was very nervous but she performed with excellence and I think it was a good confidence booster for her.

The only thing was that I couldn't be there while she performed because I had to go pick up my younger daughter (Jane, 8) from school. The rules don't allow parents in the room while the judging is going on anyway but I couldn't even stand outside, sending good vibes and crossing my fingers.

It didn't matter, you know. She didn't need me.

My husband came home from traveling last night. He made it home in time to meet me at the Middle School orientation, just in case we really DO have a child going to Middle School next year. When we got home, he opened a bottle of wine. I said, all smug, "You know, I didn't drink wine the whole time you were gone. I haven't had any wine this week."

And he said, "And it's already Wednesday, Barb. That's like Monday and Tuesday night. Can you even remember what wine tastes like?"

Our ridiculously dumb cow dog, who suffered an leg injury in February that left him emotionally crippled but physically fine, overcame his fear and has fetched the paper three days in a row. This is a huge milestone for everyone. He's so dumb, though, that if he hesitates and makes a false start and comes back and tries to hide behind my legs, all I have to sit him down and act like this is the most exciting thing in the world! He has to wait...wait....wait...OKAY, GET MY PAPER!! The anticipation of going short circuits his fear and off he goes.

Jane has been writing poems in school. When I saw this one, I almost cried: 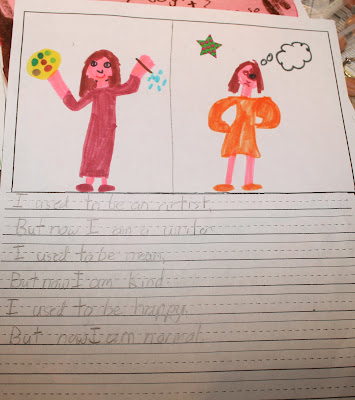 So, I asked Jane, "Sweetie, this says you used to be happy. Are you no longer happy?" (Subtext: I'm sure it's my fault that you are no longer happy. Oh, how have I FAILED you??)

And Jane said, "No, I'm plenty happy. But you used to call me Smiley Jane because I was always so smiley and happy. Now I'm more normal."

The Dister said…
Oh honey! That poem gave me a little shiver. Leave it to Smiley Jane!

You just tell Coop to be quiet. Monday night AND Tuesday night AND missing your husband AND single parenting AND going to middle school orientation!!!

Stefanie said…
You know, I'm pretty sure that my mother is convinced I came home from the hospital yesterday as well. Imagine her shock when I reminded her I am five finals away from being a sophomore in college.
April 30, 2009 at 2:26 PM

ccr in MA said…
"Can you even remember what wine tastes like?"

LaDonna said…
Oh, Barb, sweetie. Yes, the denial is strong but if you don't face the truth now, you will be hit smack in the face with it when you have to watch her walk into the school next fall. She IS going to Middle School, and she'll be excited and you'll dread every moment leading up to it. And two years later you'll be wondering what happened to that sweet, loving child? And where did this moody teenager come from? And is she really going to another boy/girl dance this Friday? And when is she going to quit texting her friends? And can I get away with braining that boy who broke her heart? And how can I keep her from failing geography? And is there really only one more year til she's in high school? And.....

Mary Ellen said…
Middle school? Sad for a bunch of reasons. I hated middle school - well, I hated that time when my kids were in middle school, - and only partly because of the whole "I'm getting old" vibe.

As far as the wine conversation? I might still be giggling about this next week. Your husband rocks.

Linda said…
Oh wow, the whole growing up thing. And Jane's poem. Makes me revisit your "Happy/Other" column and our conversations around it. Truthfully, I've already BEEN revisiting that issue recently as it pertains to my daughter.