I haven't said much about this but I have this new walking friend named Donna. And when I say walking I mean WALKING. For exercise. And company. And therapy.

I said to Donna the other day, "I know you won't believe this but I am SHY. If you hadn't e-mailed me, I would NEVER have e-mailed YOU. And, gosh, I can't tell you what this means to me! I'm a totally different woman since we started walking."

And she said, "Well, I read your blog and I could see how depressed you were getting!"

She, you know, saved me.

Like my friend Miraculous Laurie, who will always get the credit for making me get off the couch and go see a doctor when my depression became clinical.

And then I was thinking about Lin and how lucky I was to have her here, even for a short time. Whenever I think of Lin, I think of how crazy she is about her husband. Which is exactly how crazy I am about MY husband. Which is also something shared by my NY friends Donna and Two-N-Anna and Miraculous Laurie and my friend Sharon (who lost her husband much too young, much too early.)

So, in the year since I first moved to Long Island, I have met five exceptional women, who are all incredibly smart and who all love their husbands madly. I guess maybe I'm drawn to people who are happily married. I get kind of uncomfortable around women who bash their husbands --not that there isn't some bashing necessary on occasion, I understand that--but for the most part, I seem to make the best friends out of people who genuinely LIKE their spouses.

Anyway, back to Donna. Donna is truly fascinating because she's the most evenly distributed right and left brain person I know. She's VERY creative--VERY. But she is also very into the science behind things and she has a brain for it. I'm very into the science behind things but my problem is that I can never remember any of the specifics of the research I do. I'm likely to explain complex theories by saying, "So, there's this thing that does this thing..." Lucky for me, Donna can fill in the blanks, kind of like Mad-Libs.

(As an aside (No? Really? Barb digressing?), it occurs to me that I am FREQUENTLY at a loss for proper nouns. I used to joke about it, saying things like, "It's Friday, I am out of nouns. I'm expecting a new shipment on Monday." But the Mondays come and the Mondays sometimes go... and I still can't seem to speak. My best friend when I was in college was a dancer and the most incredibly clumsy person I've ever met. I (very gently) teased her about this and she told me, in all seriousness, that she thought she used all of her grace up when she danced. She was an amazing dancer so this seemed plausible. Maybe I use all of my nouns up when I'm writing? Would I have to be an exceptional writer for this analogy to work? How can I be one if I am out of nouns?)

Donna is about the same height as Ana (5'1") but she seems taller because she has such a big personality. She has a bazillion watts of energy and she's the farmer I always wanted to be. She keeps chickens and, aided and abetted by her husband, keeps the biggest kitchen garden I've ever seen. She's smart and funny and kind and she loves her child with the fierceness shared by all of my best friends. She is also a what-you-see-is-what-you-get kind of person. I find I respond to that well because I hate guessing about what people are feeling.

I'm so excited to have met someone I like so much and I'm so grateful that she wants to walk with me. (And, obviously, I can't express what it means to be mobile again.) Sometimes we've done our walk and we still have so much to talk about that we go on another half-round.

Okay, I'm going to quit gushing about Donna. Right after I tell you that she totally fixed my kitchen drawer that had been broken since before we moved in. Look! 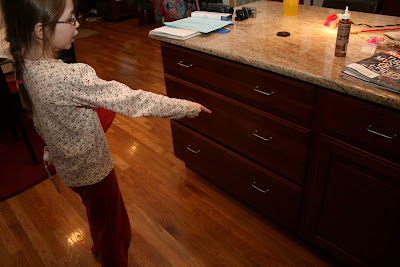 MadMad said…
Yay for new friends who are awesome! Yay for walking, and being able to! (I just bought myself a pair of FitFlops in a desperate hopes it'll make the walking even better...)
April 23, 2009 at 9:44 PM

Sarah said…
It's okay to gush. There's nothing better than a new friend who you actually and totally connect with. I'd be lying if I said I wasn't envious, because I so totally totally am.
April 24, 2009 at 7:21 AM

Candi said…
Oh I know just what you mean about finding the right kind of friend!For us it is the same - our best friends come in "family size" (it only seems to work if our whole family gets along with their whole family). It makes it harder to find those great friends, but so worth it!
April 24, 2009 at 8:01 AM

Unknown said…
cool, good friends are awesome/ And I prefer people who are happily married as well. I was going to say more but I too appear to be out of nouns (and adjectives, adverbs...looong very bad week at work)
April 24, 2009 at 1:08 PM

Sherry Sea from Austin said…
Congratulations on walking and talking and making new friends. I hope you'll forgive my envy! African Grays are better at friendly chat than I am. I'd rather die than go to a party where I'll know no one. If we know two names on our new street in NY by the end of the summer, I'll consider it a major triumph.

I guess all my friends are either happily married or happily single. I guess it's the general happiness that's the key. If I want to be around any world class whining and misery, I need look no further than a relative:)
April 24, 2009 at 11:10 PM