So, the thing is we have two dogs. One of them is our old dog Sydney, who is 13, and a truly wonderful example of all things canine. The other is Scout, who is... well, terminally stupid. Scout is sort of a Border Collie, Australian Shepherd mix but apparently we got the worst half of both because he is just... well, see this column for more. Note that I couldn't tell EVERYTHING about how my husband picked Scout, not without resorting to falling on the floor and striking myself. Like I didn't even touch on the fact that he chose Scout because he was so animated and BARKED SO MUCH. Clearly the man is running some kind of experiment to see how long I can go without the thin cord that connects me to sanity snapping like a cheap pony-o.

Because Scout is mostly Border Collie, he needs a significant amount of exercise every day or he gets neurotic and chews up every freaking flip-flop in the house. So, with my spouse having skipped town on some so-called "business trip," (he packed his cycling gear) it was up to me to take the dogs out back and throw the ball.

Did I mention that Scout LIVES to play fetch? He may not be the brightest bulb in the chandelier but that dog can FETCH. He's the best dog I've ever seen at dropping the ball right at your feet, too. And his focus is pretty impressive, well, until you remember what dog you're dealing with and how he forgets who you are in the time it takes you to walk to the mailbox and get the mail. (Sometimes, in the middle of the night right when I've finally entered REM sleep, he'll bark at one of the cats. Just forgot that kitty lives here, too.)

Anyway, our house backs up to a green belt and we have a good track out there for the dogs to run. This was the first time I've been out on the greenbelt since my foot surgery (seven weeks and two days ago) but now that I'm in this nifty walking boot and actually able to touch it to the floor without crying soundlessly, I thought I could do it. Since my spouse is out of town "working" (just kidding, hon!)and it's flip-flop weather here in Central Texas and the kids already don't like Scout, so I thought I ought to get him some exercise.

We use this contraption that enables me to throw the tennis ball a long way, although I'm a little out of practice. Look, here's Scout trying to find the ball in the woods where I accidentally threw it. 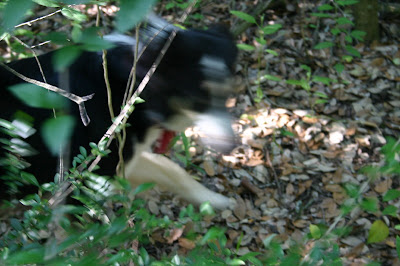 Here's Sydney trying to get out of the way before Scout mows her over. 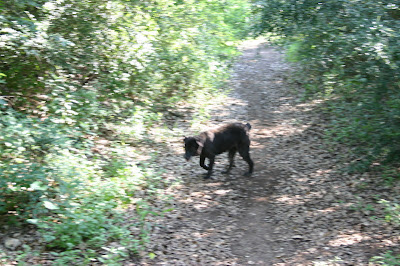 And look, here's Scout hoping I don't hit him in the back of the head with the ball again. 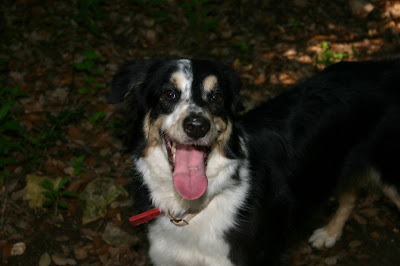 (I hadn't counted on the mosquitoes the size of Buicks out there, though. After I got bitten about 30 times and could hear the little suckers massing for a last attack, screaming, "WEST NILE!" I headed back to the house.)

I don't why I think this is Blog Worthy except it seems indicative of one of those small things that have come together to create this thing I call my life. I mean, OF COURSE, we have the world's dumbest and most enthusiastic dog! Of COURSE we do. And OF COURSE he has affinity for the one form of footwear that causes constant friction between my husband and our daughters. And of course, we weren't going to adopt some pedigreed, trained, snooty, continent dog --what's fun about that?