We missed the recycling pick-up. 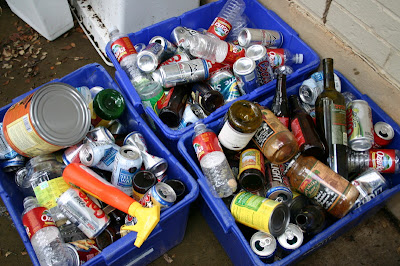 That's not a personal best for the Cooper household, I don't think, but the trash might have been. Had we missed the trash pick-up, I might have had a breakdown but since it was just the recycling, I had a chance to take pictures. Which I didn't do during the party because I was so busy. I took two pictures the whole day. I hope someone else took some better ones.

I think it was one of our best parties. Naturally, this was due to the fact that I had adopted this "I don't care if it's not perfect, people will understand, I'm in a cast for goodness' sake" attitude. (As an aside, according to the new AP style, that should be goodness's sake. I just can't do it.) At any rate, my attitude contributed to a general feeling of relaxation on the part of all party guests. It's hard to relax when the hostess is wound so tight you could bounce her like a rubber ball and hit the second floor ceiling.

This also means that everyone gets so relaxed that they let their kids do things they wouldn't think of letting them do if they weren't in the home of all these people acting like Children of the Sixties. Like, say, wiping large amount of icing onto the rug in the den. But I'm okay with that, honestly. I'll probably get it cleaned up by our Kid Friendly New Year's Eve Party. Or not. (That rug is toast anyway. I'm less Stoner-Calm about the smooshed-in cookie on the couch.)

My poor husband didn't get to run his race, after all that training. Months and months of training. You wouldn't believe the rain we had. I feel really sorry for the race organizers --because you know they wanted a huge race. They're GUYS, after all. But in some ways, I think this might have contributed to the success of our party because A) the would-be racers didn't spend the whole time rehashing the race while the rest of us fought not to fall on the floor and strike ourselves, and B) they weren't running to the computer to check and see if the results were in and C) they weren't dead asleep by 2:00.

My mother-in-law and Coop's Aunt Diane did almost all of the kitchen clean-up--which is just amazing because there was a fair amount. (It's also amazing that she was here because she and my father-in-law haven't been married to each other in 20-something years. But they get along okay, so it was all okay.) I was on Towel Washing Patrol and acquitted myself fairly well.

And get how cool my father-in-law is: he actually saw me knitting and ASKED me about the whole process. I ended up showing him how knitters are the most generous people on the web--all the free videos you find on Amy's site. And the free tutorials out there, like the one that made me a sock knitter, Silver's site. He said, in his classic way of getting right to the essence of things, "You know, that's very kind." And it really is.

The food was amazing and Coop's Uncle Paul even held back a rack of ribs for me (I can't ever eat during a party, can you?) so when the party was over and the dishwasher and washing machine were purring in the background, I had a snack and a glass of wine and we all watched some Jonny Quest and then, after the kids had gone to bed, some Criss Angel Mindfreak (everyone in my husband's extended family is really into magic and magicians.)