My oldest brother had a Faux Fiftieth Birthday Party today. It's why we're in Dallas instead of licking our wounds in Austin. Because we are SO wounded.

I think my foot hurts worse than after the surgery when vicodin was an option. I'm in this new walking boot but the thing is... walking in a walking boot isn't exactly like it sounds. It isn't really WALKING. And it really hurts.

Other than that, life is rosy. My husband had gum surgery on Wednesday and this is how he looks: 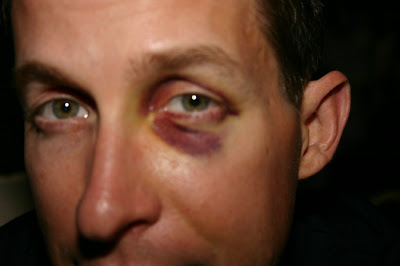 It's been four days and so far, every day he's looked worse. Between the two of us, I know people are thinking that either we had one hell of a fight or we were in some kind of massive car accident.

This, too, shall pass, right? RIGHT?

I'm knitting the second sock to Ana's pair. And today, I went to the Woolie Ewe in Plano. It defies description. I bought so much yarn that the owner gave me a free Woolie Ewe Mug. I gave it to my mom. I'm not worthy.