Usually, I really like the number four. There are four of us (humans) in Cooperville and there are four pets. There's a certain symmetry there, you know? (Because symmetrical insanity IS the goal.)

Anyway, today I was not so fond of the number four because my doctor told me that was the number of weeks I would still be in this...[ ]... boot. (I'm sorry. I am trying not to curse.) I don't know. I was hoping for better. For shorter. For something that smelled a bit less like the back end of a camel.

How do I know how the back end of a camel smells, you ask? Well, I've smelled the FRONT end and this is worse.

Because I met this woman at Jane's gymnastics recital. (Did you know about these? Truly, they make all the parents come into the gym and then we all follow our girls around the gym as they do absolutely death-defying things on these horrifying apparatuses and we try not to scream while videoing the whole thing.) Anyway, this woman was in her twelfth week of being on crutches and I wouldn't want to trade places with her for all the book deals in China. Let me state for the record that crutches are worse than the boot, although they don't smell quite as bad.

Four is also the number of days my husband has been gone. And I miss him. Not just because HE would have been able to catch the enormous moth in Ana's room tonight --boy, that boot really slows down my Spider Moves! But just because... well, I miss him. There are funny things that happen and I don't really have anyone to share them with because really EDWARD can NOT be bothered. 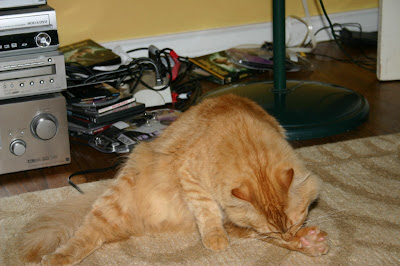 (He's kind of like the Fonz of our cats. And very concerned with grooming at the moment, not to mention that he can do the splits better than *I* can.)

I went shopping for an entertainment center today and think I found one I like at Crate and Barrel. The REAL one I like is this Avion one that costs $1500 dollars, which is more than the television that we want to stand on it. Anyway, I wandered around Crate and Barrel and couldn't get anyone to even talk to me so I went to World Market and looked at chairs. Why the sudden need to get my house in order, you ask?

Well, because tomorrow morning, the new Editor of the Magazine is coming over for my files and all. I figured I could either prepare for that meeting or I could tile my new bar area. 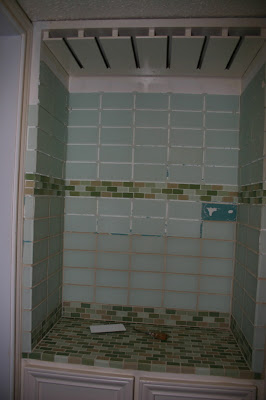 I think I'll have time to grout before she gets here.
Email Post
Labels: foot furniture growing up pets real world snooty salespeople