I am back in Austin after a really frustrating trip to New York for house-hunting purposes. I'll tell you all about it but first, I have to tell you about the Old Bait and Switch on my flight back.

So, my flight left at some Early Hour that required me to get up at a time that had a beginning number of FIVE (5) in it.

But I took the hotel shuttle and I went through security and I didn't have to be all searched or wanded or anything so things were looking up. I boarded the plane and sat down in Row 16, in seat A, and I waited to see who was going to be assigned to sit next to me.

Dude, I was afraid to even spread out because, you know how it works, you raise the armrest between the seats and you get your pillow and you put your legs up on the seat and settle in for a long winter's nap when BAM! The fattest person you've ever seen claims the seat you've just claimed for yourself and not only that, she's afraid her carry-on luggage is a little over-sized and so, she wonders if you'd mind putting YOURS in the compartment overhead where it will have shifted during take-off or landing and then give you a head wound when you try to retrieve it. Know what I mean?

So, I hardly dared breathe, I was so hopeful that I was going to have two whole seats all to myself.

Sure enough, the doors closed, we taxied out of the gate, and still no one came.

Then we had to taxi back to the gate for something the pilot called a "customer service situation" but by then, I was SO napping, so I have no details for you.

I napped through take-off and we were airborne and the captain released us from having to wear our seat belts (I mean, just in case we wanted to feel free to move about the cabin). I sat up for a minute to adjust my pillow and wipe the drool off my face and, as fate would have it, this MAN said, "Is this seat taken?" I was so groggy that I said, "Um, wha?"

And he freaking sat freaking down.

"My screen is broken." he said, referring to the little television screen in the seat in front of him.

And just like that, my little pipe dream came to an end.

And I don't want to even tell you about how he had this MOLE with HAIR STICKING OUT OF IT that was exactly in my line of vision if I turned my head to glance at him in annoyance because he was --I am not making this up-- peeling his face.

And then, he'd brush the flakes of dried skin off himself vigorously and I almost threw up in his lap each time. I was very relieved when he progressed to sucking his teeth. And then once, he got up and came back with, like, six bags of chips that he put in his briefcase for later, I think.

Anyway, now that we are all sufficiently traumatized (anyone else feel the need to go exfoliate RIGHT NOW?), I should tell you that we spent eight hours with the Realtor on Saturday, which was also my husband's birthday, and then on Sunday, we woke up and the world looked like this: 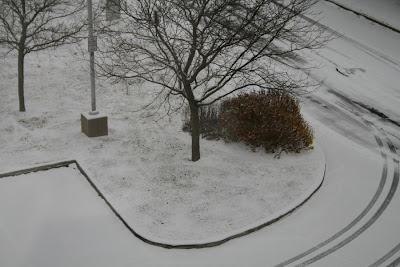 So, we went back to visit the house we put an offer on and I took a gazillion pictures so I could carefully plan what all we'd have to do to it and then the owners refused to budge from their exorbitant price, despite the fact that for that kind of money, one might expect that it might not need a total remodel. So, good luck to them and see ya in January when the market drops even further.

The trip wasn't an entire waste, though, because A) we saw much better houses this time around--some of which could seriously have been contenders if we hadn't gone with the one that was the funkiest and needed the most work and B) because I saw a shop called THIS: 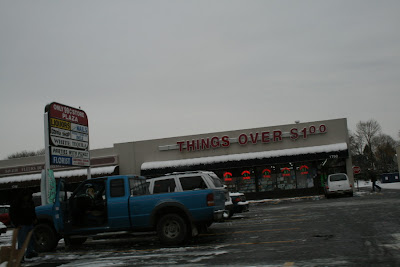 You can't make this stuff up.
Email Post
Labels: A picture is Worth at Least Ten Words humor Life in the Modren World The Great Cooper Move travel

Ei said…
Oh man, I just around to replying to your last post and my begging for sweet lies did not include peeling faces (oh gag, I thought I'd heard it all). But that's ok. The Anti-dollar store made me very happy.
December 3, 2007 at 5:11 PM

Suburban Correspondent said…
Hmmm...Above 1 Dollar pretty much covers anything, now doesn't it? Things are a bit more expensive on the East Coast than down in your area. I hope you visited the deli in the same plaza - I don't think you can get that kind of food where you live in Texas. And pizza? Did you check out the real pizza? (Shut up, DK). (I meant that in a joking manner, of course.)
December 3, 2007 at 5:52 PM

DK said…
::Sigh:: See, I wasn't going to say it, but now, now you threw down the gauntlet, Suburban Correspondent...

Of COURSE she didn't get any real pizza! ;-)

I have to admit, though, these days I'd kill even for a good slice of NY pizza...North Carolina leaves an awful lot to be desired.
December 3, 2007 at 6:17 PM

Barb Matijevich said…
You guys are welcome to carry on the pizza war and all but I should probably mention that I HATE pizza. Just, you know, sayin'.
December 5, 2007 at 12:45 PM

Suburban Correspondent said…
Well, here's something DK and I can agree on: Barb, you hate pizza because you haven't had the good stuff yet.
December 5, 2007 at 1:21 PM

A) Y'all are assuming I've never been to Chicago or New York and B) Pizza is one of the three things my kids eat and I hope I never see it again, I don't care WHO makes it.

Can we get back to the really important things about my blog? You know, the face peeling man and my nervous breakdown?
December 5, 2007 at 1:27 PM

I'm about to eat some leftover pizza, and the last thing I want to think about is that gross peeling guy.
December 5, 2007 at 2:19 PM

DK said…
LOL - good job connecting those two conversation threads, Rockstories! Way to bring it back around!
December 5, 2007 at 4:02 PM