Well, What Do You Know?

I finally stopped sulking or waiting for Sears to suddenly remember that they had completely screwed me over after I waited for three weeks for my appointment for them to fix my clothes dryer, which they missed (not that I'm still bitter) and called an appliance repair shop today. Guess what? They're coming out TOMORROW. Apparently, if you want a dryer fixed, you can't just sit around and wait for it to miraculously heal itself. You have to DO something.

This seems to be a reoccurring theme in my life at the moment--I think the Universe is trying to tell me something.

You know how my foot hasn't ever recovered after the whole horrendous reconstructive surgery? I've been kind of going to physical therapy and waiting to be miraculously healed, right? Well, yesterday, I went to the foot doctor and got some potentially good or bad news.

*Disclaimer: although I fancy myself both a good listener and fairly up on medical terms, it's hard to really listen when someone is poking around in your ankle with a needle. So some of this may be just really, really wrong. I apologize to any podiatrists out there reading my blog.*

The doctor said that it was definitely not normal for me to still be in pain and set about diagnosing. After some poking and prodding, he said that he thinks it's one of two things. Either it's what is called a nerve entrapment, where my nerve has somehow adhered to the bone and skin which means pain with every step or it's a bone issue, which probably means another surgery. We went with the "nerve entrapment" theory and he tried anesthetizing the nerve by sticking a big needle in my foot a multitude of times until it hurt and then dousing it with painkiller. Nope, still hurt when I walked. So he did it again, on ANOTHER nerve and then it felt a lot better.

Which led us to believe it's the nerve entrapment thing. The treatment for this is a series of steroid shots which will dissolve the adhesion. He gave me the first one and told me to "go live your life today." He said that he wanted me to really try to stress my foot out and that the best possible outcome would be that there would be no more pain and then I would have a second shot on Friday.

So I went home and hung my Christmas decorations and did some painting and threw the ball for the dogs. And I ordered my Christmas cards online, which requires a lot of stamping of the feet on my part.

Unfortunately, there still IS pain.

But since I have such weird pain reception (he said that walking around with a nerve entrapment must be excruciating. It's not, really, although it is annoying and um, sometimes very painful but mostly it's just twingey.) I can't tell if my foot is just sore from all the shots or if it's still the same sort of pain. If it's the same sort of pain, it means that there is something wrong bone-wise and that I will most likely have to have a second surgery, the thought of which makes me want to fall on the floor and froth at the mouth.

It really does feel easier to walk.

But there's that pain thing. Which today seems fairly significant. I am so discouraged that I want to cry.

Okay, but on to other subjects because 'tis the season to be all happy and properly medicated and who wants to read about some poor woman who can't even do LAUNDRY, much less walk to the mailbox, not that I'm bitter? Okay, so really, I AM bitter but some of it is no doubt caused by sleep deprivation because last night, Jane got up at 3:00 AM with an urgent matter: Thomas (thebigfatcat) was in her bed. Since he weighs close to half of her body weight, she can't lift him and she is OUTRAGED by that. She came into my room and I let her crawl in bed with me but, let me tell you, boy HOWDY, Jane KICKS. When she finally kicked me so hard that I thought about kicking her back, I sent her back to her room and brought Thomas into MY room. And then Thomas, at 4:15, decided that he really wanted some LOVE and started licking my head, which is just AWFUL at 4:15 in the morning because he has the roughest cat tongue I've ever felt and it makes me laugh. I finally put a pillow over my head and that's when he SAT on me. I might have a bruise.

I DID finish my dad's socks. 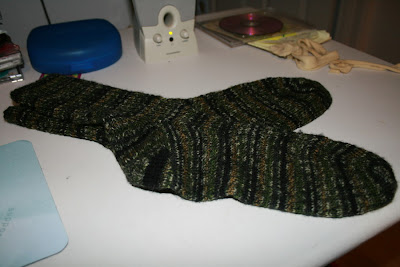 Finally. After, what, six years of knitting on them? Okay, I knitted the first one in July and just knitted the second. I had to Kitchener them with THIS: 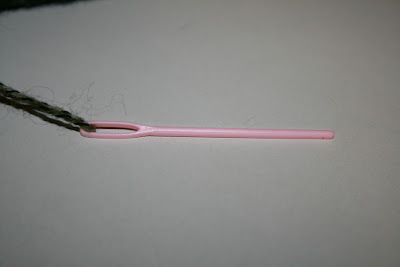 And then I cast on some mittens. 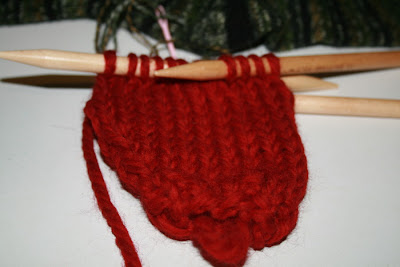 Despite the fact that it was 75 degrees here yesterday.

Okay, I'm off to unload the dishwasher and make the beds. Because apparently, nothing's going to get done around here by just waiting for a miracle to happen.
Email Post
Labels: foot heartbreak humor Life in the Modren World Maybe I Should Just Shut Up My LIfe as a B Movie parenting socks The World According to Jane

Suzy said…
I'm waiting for foot surgery myself, as soon as I come up with the 12K since I have no health insurance because I'm a standup comic. Not known for our health insurance.

I have no cartilage left in my right ankle. I'm on 1600 mgs of Advil a day and am close to scoring heroin on the street. And then I read your blog and hear that you may need more surgery and I get more scared than I already am. I am on the second floor of a non-elevator building.

I will be on crutches, by myself, here in Hollywood for 3 months. This morning I woke up and lay there thinking, What if I have to pee in the middle of the night?
December 19, 2007 at 3:55 PM

MadMad said…
Aw, man! I can't believe they haven't fixed it yet! That's awful! You poor thing! I wish doctors actually knew what they were doing - even just half the time would help!
December 19, 2007 at 4:41 PM

I'm sorry (?) to hear about your foot. At least I think I am. Unless this whole steroid injection thingie works. And then I'm glad. Or something. Ultimately, I just want you to feel better.

My sister keeps telling me a good date isn't just going to fall out of my living room ceiling. Does this mean she's right and I have to go looking for one?
December 19, 2007 at 4:48 PM

LaDonna said…
Hey, can you explain to my husband how things don't just miraculously repair themselves if you just wait long enough? I asked him to fix my cabinet sewing machine over a year ago (the leg of the cabinet was broken off when we moved into our house), and it's still sitting there. Maybe I'll call and get estimates on getting it fixed and show him those as motivation.

Well, I guess that's good and bad news about your foot. At least you know the pain shouldn't be there and with some potential solutions, there's hope :)

The red mittens are beautiful! They remind of me some red mittens that my grandmother made me when I was a kid. If you don't have any use for them, send them on up to Fargo. We have plenty of snow and it's freakin' COLD here!
December 19, 2007 at 4:54 PM

Suburban Correspondent said…
If I were in chronic pain, I would whine a lot more than you seem to. Oh, wait, I already whine more than you do, and I'm not even in pain.

I must admit I was confused by the picture of the pink darning needle - I mean, that's what I do Kitchener with. What am I supposed to be using?

You'll need those mittens next year. I'm planning on starting some mittens soon. Someone gave me a good basic pattern and I can't wait to get started; it's just there's this bronchitis and Christmas and New Year's thing getting in the way. Blasted inconvenient.
December 19, 2007 at 6:13 PM

DK said…
I still think it sounds like a good story for nerve entrapment. And, this occurred to me later - so, typically, when we do a joint injection, we inject with both a steroid and a short-acting anesthetic (think Novocaine, like you get at the dentist). The latter typically makes it feel better right away, but wears off after thirty minutes to two hours, depending on which "caine" you use. The steroid is more to reduce the inflammation, in a long term kind of sense, but it often takes multiple injections.

So maybe that's why you felt better initially but then the pain came back.

Plus, remember, there's a difference between "this is the best possible outcome" and "this is what you should expect." You're being very black and white, here. Give it some time. Have some wine. Have some chocolate. See if you can find a big orange cat to cuddle. That's my prescritpion.
December 19, 2007 at 7:09 PM