On Sunday, before the Open House was to begin, we had a showing at 11:00 to some people who couldn't wait until the Open House. Because I had a migraine, I forgot to put the lock box out. Whoopsie. Not an auspicious beginning. I drove back to make sure they got in and then went to Panera bread and bought a loaf of bread and a coffee and drove to the park with my knitting, taking small bites to try to keep something in my stomach. Whoo-ee, I felt TERRIBLE. Haven't had a migraine like that in a long while.

Anyway, as I parked my car, that eighties song from Madness came on, the one called Our House in the Middle of Our Street? I found a couple of real versions on You Tube but this version made me laugh out loud. ("Sister sagging in her sleep.") I never really thought of the song as a funeral march... (Feel free not to watch the whole thing because it might make you cry.)


At any rate, I thought it was a good omen.

So then I came back and tried to lie down for a bit. Gosh, I felt terrible! I always deny that I ever get stress headaches, you know? Most of my migraines are caused by abrupt shifts in the barometric pressure (no, seriously!) but every once in a while I get one that is so clearly a product of stress that it makes denying the concept sort of ludicrous. This was one of those.

The thing is that the Open House sort of seemed like the climax to months of preparation. And add to that the fact that I BOUGHT this house at an Open House --well, I set myself up.

The house really did look as good as it can look, I think. I even re-organized my pantry. 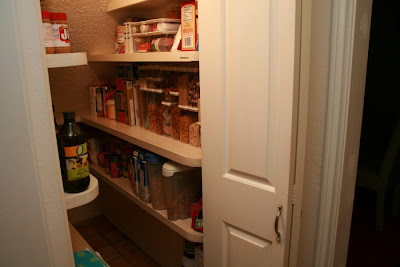 My Realtor looked at that and said, "Wow, you almost look like one of those scary people with OCD or something."

ME? NAHHHH! Nothing obsessive-compulsive about ME. Nope. Nuh uh. Totally normal and moderate in all things. (Whistles while thanking the heavens for not striking her dead.)

So, then I had to leave. For two hours so that strangers could fill my house and touch my things and pass judgement on how we live, while my Realtor tried to interest them in buying the house. It's a very odd concept, this Open House thing. I don't really understand why they work--but I know they do since that's where I found this house in the first place. Of course, I'm a tad more decisive than most people because I walked in, turned around in a circle and said, "I'll take it." ("I knew the way you know a good melon." --Ei, that's for you!)

(No wonder I'm all upset that the house went on the market last Wednesday and it's now MONDAY and the dang thing hasn't sold yet!)

Luckily for us, Sunday was a spectacular day in Austin. It was 72 degrees and sunny--our house really shows well in the sunshine. I drove around a bit aimlessly and then did the only thing possible in moments of great migraine-y stress --I headed to the yarn store. I believe in the healing powers of yarn fumes.

I wasn't going to buy anything --really, I just wanted to fondle the yarn and then go home. But I needed some cheap metal double-pointed needles because I seem to lose at least one of my bamboo ones with every sock I knit--only to find it later after I've put the sock down for, oh, six weeks or so. So I got those and then I tripped and had a falling down in the sock yarn department. 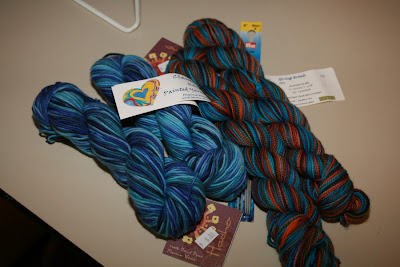 I can sort of rationalize this by saying that I am really afraid that I'm going to run out of yarn on Jane's socks. This is all the yarn I have left: 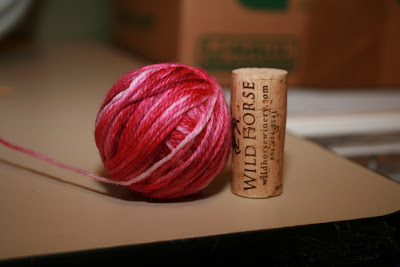 I still have to knit almost the whole foot. It's not looking good for having enough. Might ahve to go back to the store... a different store, because I'm wily that way and hokgardner and I have plans to visit another yarn store this week. (Heh heh.)

Whenever I get worried about running out of yarn, I start knitting really fast--as if I can outrun it. AND I've packed my stash, you know, so I needed SOMETHING. (Pay no attention to the yarn that Stef gave me sitting over there here on my desk. It was no match for a Claudia hand-paint named Spring Break.)

After my accident at the yarn store, I drove home through the enormous park by our house. It's hilarious that in Austin, as soon as there is a sunny day, everyone heads to Zilker Park

Here are some pictures. (Remember, there was no festival going on or anything--this is just a crowd of people who love Austin, love Zilker Park and love to get outside for some exercise. I used to be one of them. If my foot ever heals, I hope to be a least a walker again. (Some of these were taken through my (dirty) car windows so they are a little dark.) 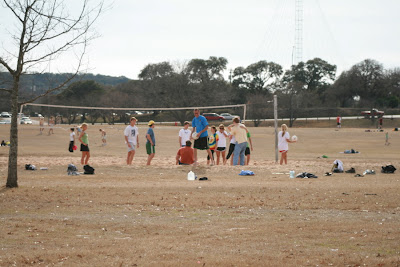 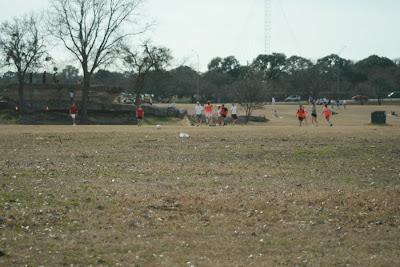 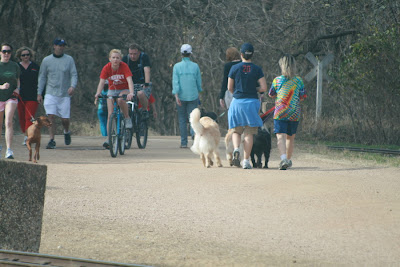 Austin has some happy dogs.

Here's one way to outwit the allergens! 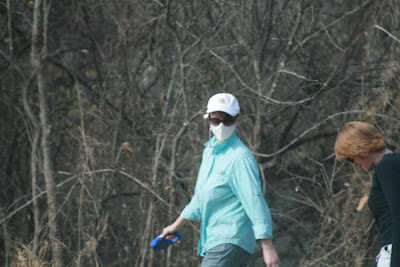 Here's a photo I took of a vendor just outside of the yarn store. How much do I wish I'd thought of this concept?? 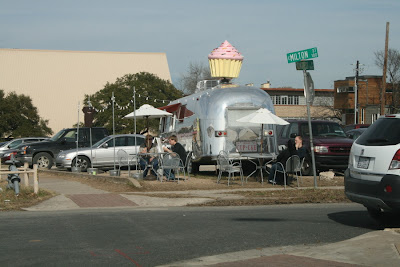 At any rate, it was a gorgeous day and one that made us remember, at least partially, why we love it here so much. My kids were hanging out at a neighbor's house and I decided to check on them so I drove up my street. I stopped by one neighbor's house. He told me he'd staged a huge fist fight in his front yard with another neighbor to really impress the home shoppers. I told him that it wouldn't have surprised me if one of them had run around banging two pans over his head and shouting, "Oklahoma! Oklahoma!" (THIS is really long and offensive--just a warning. I laughed HARD.)


Then I passed another neighbor who said she was on her way to walk through my house. She promised to tell the little kid out front to quit picking the seeds off the top of my Japanese Aurelia. 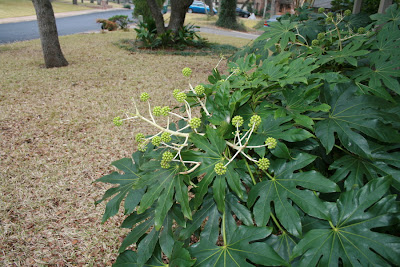 And then I got a little further down the street and saw that my girls, and our enterprising neighbor children, had set up a Girl Scout Cookie/ lemonade stand. Judging by the fact that they'd sold $150 worth of Girl scout cookies, I'd say the Open House was a big success.
Email Post
Labels: A picture is Worth at Least Ten Words humor? Realtor Reality The Great Cooper Move

Suburban Correspondent said…
Barb, I've read about realtors who pay kids to set up lemonade stands near Open Houses. Makes people fall in love with the neighborhood, you know...your neighborhood sounds like mine, by the way - everyone drops in at the open houses and such...

hokgardner said…
I'm proud to say that I knew the reference to "Oklahoma, Oklahoma!" without even having to look at the clip. It's one of my favorite movies.
January 28, 2008 at 12:11 PM

Anonymous said…
You totally need yarn when you are stressed. Besides, you need to learn to knit mittens.
January 28, 2008 at 1:14 PM

LaDonna said…
I agree with SC...72 degrees...sounds like heaven. And to think that we were thrilled to see 30 yesterday. (double sigh!)

Sounds like you live in a wonderful neighborhood and with your home looking so spiffy now, hopefully you won't need to wait too long for an offer!
January 28, 2008 at 1:49 PM

MadMad said…
When I start running out of yarn, I do the opposite: stop knitting. And leave it be in a bag in teh corner... like that's going to help it grow or something. Glad you got through your first OH. Hope it's your last!
January 28, 2008 at 2:12 PM

Suzy said…
I am a devotee of Louise Hay. "Physical symptoms are created by mental issues."

Headaches are the result of making yourself wrong. You're probably thinking you didn't:
A. stage your house right or
B. that people will judge you (as you mentioned in your post)
C. or the all time fav, It's Not Good Enough!

Relax, let yourself off the hook and most importantly, admit to yourself that it's you that is creating this.
January 28, 2008 at 2:48 PM

Ei said…
Woo hoo! $150 for the kidlets? OMG how terrific for them! And I agree both "Our House In the Middle of Our Street" and the reception at the lemonade/GS cookie stand bodes well for moving this sale along.

I know nothing of this yarn fixation of which you speak, but it sort of sounds like me and bookstores. Which is a little scary, you know?

Barb Matijevich said…
Suzy! I am shocked to hear you say that! Did YOU create your foot issues? Will letting yourself off the hook fix them? Will it mean you won't need surgery?

My migraines are something I inherited from my mother and they are the biggest price I have paid for having children. They are caused by very real physiological symptoms for which I am under a doctor's care.

Dude, never tell a migraine sufferer that she is causing her own pain. It is as false as my mother telling me that menstrual cramps were all in my head--that silly little endometriosis shouldn't have slowed me down.

I mean, you are by all means welcome to your opinion and I love you to pieces but until you've wanted to kill yourself because the pain in your head was so bad that it just didn't make sense to live anymore? You just can't understand.
January 28, 2008 at 3:42 PM

Mrs.Q said…
I have such a weakness for Girl Scout Cookies. (Well, Girl GUIDE Cookies, up here, but still!) I knew Mr.Q was right for me the day I opened a new box of said cookies - one row of chocolate, one row of vanilla, and I was thinking "Please don't take the vanilla please don't take the vanilla pleasepleasepleaseplease" (the fact that I was willing to risk it at all shows just how enamoured I was. Or how weak my resolve...) Anyway, he reached into the box and announced "I'm taking a chocolate one, I hope you don't mind, but I don't really like the vanilla ones."

hokgardner said…
I, too, have migraines, and I second Barb's comments here. I didn't do anything to cause these migraines. I control the triggers that I can - like no alcohol or caffeine or processed foods - but there are some that I can't - like barometric pressure changes and ozone action days. I'm not making myself wrong with those things!
January 28, 2008 at 8:38 PM

Anonymous said…
I just realized, this very moment, that I EAT the same way you knit. The closer I get to the end of my meal, the faster I eat....thinking maybe I can eat so fast that I'll trick my body into thinking "hey, did she just eat something.....??"
January 29, 2008 at 9:00 AM

Lynn said…
ROTFL!! I already knew the movie you were referring too but had to watch the clip. It's one of our favorite movies!
January 29, 2008 at 9:50 AM

Karmon said…
I also suffer from Migraines. I totally agree that unless you've had one and have suffered the side effects. You have no business giving advice about them. Just my $.02
January 29, 2008 at 6:29 PM

Moi said…
Came over from MadMad. So glad I did.

I love Ruprecht the Monkey Boy. The hubs family lives in OK, so I have taught the girls how to bang the pot and yell "Oklahoma Oklahoma!".