SO Not Feeling the Love

Ana, 9, is running away. I had to go help her find her ATM card and some sort of rolling backpack. She announced that she would be back in time for our move to New York. She's having the worst day of her life and do you know why? She got distracted while playing Webkinz and accidentally clicked the wrong button and KEPT the daily gem instead of selling it. She sobbed. "I could have sold it for $400! That's a LOT of money."

Yes, I know, dear heart. It's about what we spent on you for Christmas.

And she, naturally, blamed JANE for distracting her. Which made Jane (7) cry.

Which, she's been doing on and off since I made her clean up the Legos she took out yesterday. In fact, she wrote about her outrage in her notebook. 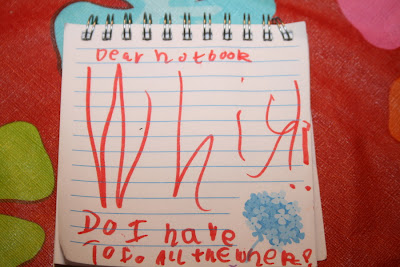 It says (more or less), "Dear Notebook, WHY do I have to do all the work?" 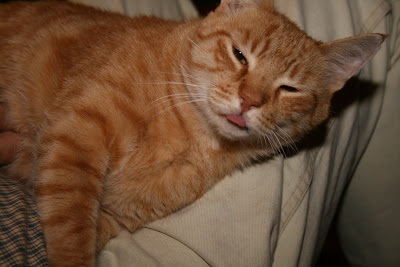 Confession: I didn't post yesterday on purpose. I just don't want to even be tempted by the Blog365 thing. 365 days straight of blogging is way too much commitment for a woman who's afraid to try to knit a sweater.
Email Post
Labels: Ana humor Life in the Modren World Mother of the Year Award--Not The World According to Jane whine

Damsel said…
LOL! I hear you on the commitment thing....

Did your daughters read the Ramona books by Beverly Cleary? If not, they would LOVE them. There's one chapter where Ramona's mom helps her pack so that she can run away, but then Ramona can't carry the bag. She realizes that her mom packed it too heavy on purpose. :)

Ei said…
Jane's notebook and my notebook have been chatting. I was whining like that a day or two ago. Unfortunately, i've got 30+ years on her.

Seriously. You, me, alcohol, "sweater clinic" on a NC beach. It's be a good weekend.

Love the picture of Thomas.

Also love that you had to help Ana run away. And I'm glad Jane has an early start on journaling her angst. So therapeutic.

hokgardner said…
I think my Ella and your Ana and Jane have been talking to each other. We get regular letters from Ella detailing her woes. New Year's Day was the WORTS DAY OF HER LIF because we made her clean up her room. She even drew tear drops all over the bottom of her letter to emphasize how much she'd been crying.

TheOneTrueSue said…
I still have no idea what a Webkinz is, and I think I am grateful.

Suburban Correspondent said…
Barb, honey, you already post 365 days. But it's okay, because your motives are pure - you do it for the fun of it. You're allowed.

Jillybean said…
You made her clean up the Legos? You are such a MEAN MOM! Seriously, what were you thinking?? ;0)
One day our 7 yo daughter told us we were the worst parents in the world, and she was going to run away. We helped her pack her suitcase, put her coat on her, kissed her on the forehead and sat her on the front porch. She sat there for 10 minutes, then she knocked on the door, sobbing, because she missed us so much.
January 6, 2008 at 1:41 AM

Barb Matijevich said…
Yeah, when Ana was five or so, she wanted to go back to the grocery store and find a new family. I told her I would drive her right back. She looked at me in consternation. "Mom, people can't really find new families at the grocery store!"

But when Jane was three, she packed up her Elmo suitcase and headed off down the street. She ran into my neighbor who kept trying to stall her. "Jane, watch out for strangers." "Oh, I know all about THAT." I had to race after her and promise her she could run away another day to get her to come back. Lesson: Don't try to call Jane's bluff.
January 6, 2008 at 9:11 AM

Me. Here. Right now. said…
Barb - The 2008 Weblog Awards (Bloggies) are being voted on now and I voted for you for Best Humor weblog....perhaps all your readers will scoot over there too and vote, eh?

MadMad said…
Hahahaha! Ask Jane if I can borrow her poster, please...