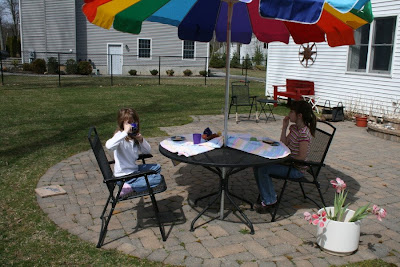 My fellow members of the Kingdom of Cristillea (pronounced "Crystal-leah", as She Who Must Be Obeyed informed me earlier), I think Spring is finally here. The two princesses, Juliana and Edana, held a royal tea party in the royal back yard, aided and abetted by the Royal Tea Hostess Georgeana. (I don't make the spelling rules here so just hush.)

They had the opportunity for this lovely event because the past two days have been early freaking release days (which Suburban Correspondent thinks sounds like a prison term. Which makes ME ask, prison for WHOM?), which has meant that I drop Ana at school at 7:45, Jane at 9:20 and then I pick Ana up at 11:10 and Jane at 12:30. Which gives me about, oh, an hour to try to get anything at all done, not that I'm bitter.

I finally just gave up and gave into the flow of things, although I did make them sit in the car while I went around the neighborhood posting new "STILL MISSING, STILL MISSED" fliers for my cat Edward. Because he is and he is.

And I'm not saying I gave in, but I strongly did consider a rum and coke at about 2:30. A mom sometimes needs an early realase, too.
Email Post
Labels: Back to School Edward I love my kids...especially when they're sleeping Mother of the Year Award--Not

Anonymous said…
Oh honey, I think rum and coke (or its equivalent) is de riguer for mom's on early release days! HATE those!!! We have one next Monday and then again the first Monday in May! Your yard looks beautiful, though!

Suburban Correspondent said…
Did I say that? Well, I agree with me - it does sound like a prison term. And we have those every Monday around here...I mean, for the non-homeschooled kids. For us, every day is an early release day.
April 9, 2008 at 4:57 PM

TheOneTrueSue said…
Every day is early release day when you have a preschooler and a kindergartner. Sometimes I think I should start drinking.
April 9, 2008 at 8:47 PM