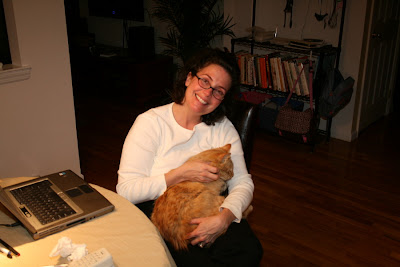 Please forgive me if I am a tad incoherent today --I had six weeks of cuddling Edward to catch up on and I'm a little sleep-deprived.

I have to start by telling you all of this weird thing that happened. Remember Monday when I spent the whole day working on the guest room and going through all of my office stuff? Well, I found a fortune (from a fortune cookie) that I'd saved because it said, "You will soon witness a miracle." I know this sounds crazy, but I took it as a sign that I was going to get Edward back. I can't really explain it but I was just certain all of a sudden. I sent an e-mail to Tiffany where I said, "I know this sounds crazy but..." and then I told Lin about it, too. (Lin said, "Oh, wow, I bet you sell your house!" and I said, "No, I bet I get Edward back!" Without missing a beat, she said, "Well, okay, or that!" She cracks me up.)

I know that sounds crazy. I really do. But y'all know how I'm always looking for signs, right? It's part of my psychosis --er--charm.

Last night, as I was working on a blog post about how blue I was feeling, my husband opened our front door and said, "Guess who's home?"

And there, in a cat carrier, was Edward.

I started SOBBING --seriously. Ana said later, "I've never seen you cry like that." (I'm getting all teary just writing about it.) Both girls started to cry and jump around and there was mass chaos and a lot of kissing Coop and questions and laughing and we opened the cage and let the Furry One out and there, there FINALLY was that tail. Oh, how we had missed that tail. Jane kept bouncing around saying, "The flag is home! The flag is home!" because that's how we talk about Edward's tail. It's part of our ART in this house, that tail.

So, after things had settled down, Coop told me that the reason he surprised us all that way was that he'd gotten this very cryptic message on his cell phone from the Home Again microchip people. He let me listen to it and honestly, if you weren't looking right at a certain orange puff ball, you might think that they'd found the BODY of a cat. It said something like, "We are calling with regard to your cat with the microchip XYZ123. Please call the XXX Shelter for more information." Coop tried to call the shelter but got a maze of telephone buttons and boxes and press-this-for-that, etc. and he couldn't seem to get a PERSON on the phone. The shelter is pretty to close to our house but Coop knew I had the girls at home and he was afraid to call me and tell me to go to the shelter and get Edward because what if Edward was No Longer? So he left work (things at his office are not so easy to just leave right now but the man has his priorities) and high-tailed it over to the shelter.

And there was Edward.

It turns out that a family living about six miles (!) east of us had noticed Edward hanging around about two weeks ago. They weren't sure if he was feral or belonged to someone but they started feeding him and he started being Edward and then when it rained this week, they let him inside their cabana with a litter box. The daughter, Nicole (15) called her mom at work and said, "Butterscotch is using a litter box. I think he belongs to someone."

So they loaded him up and took him to the shelter. The staff at the shelter scanned him and got our contact information. The mom (Susan) told me that he was the first cat the shelter had ever processed who had a microchip! Isn't that amazing??

He's very thin. He weighed about 12 pounds when he went missing and I bet he barely weighs eight pounds now. And he's a bit disoriented. He knew me though, right away, and slept in his old spot on my pillow. I carried him downstairs twice to get food--he's eating like a horse. The dogs seem to be back on board with Edward being home but Thomas? Thomas is acting like he never even KNEW Edward, much less cuddled with him and played with him. Thomas is seriously P.O.'d over this new cat we've brought home.

So, there it is: another happy ending in my blessed life. I'm going to take a fat check and the carrier back to the shelter this morning, in the name of the people who brought us back our Edward, may the heavens bless them. I'm going to try to remember all the things I promised Buddha that I would do if we got Edward back.

I'm going to get down on my knees and thank God for the collective positive power of you amazing people all over this country who waited with me and prayed and ate spaghetti and cried until we got Edward back.

And I might just curl up on the couch and take a little nap with an orange tabby who is home at last. 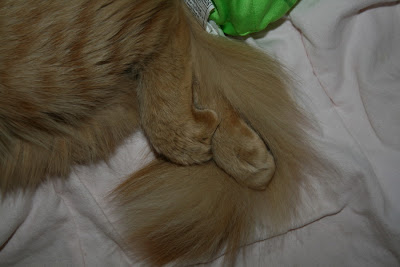 Mrs.Q said…
That story is the best start to my day! Welcome home, Edward!

Mokihana said…
I am still crying about this. The miracle, and yes, it is a miracle. Edward. Home. Safe. I had tears in my eyes from the time I read your first post about him till I finally fell asleep, thanking God for taking care of the orange boy.

Six miles! Blessings on the family who took fed him and took to the shelter.

I am so glad for your joy.

Mokihana said…
PS: And blessings on Coop, who did exactly the right thing, even though he had to leave work.

Rene Perez said…
I am so happy to see that your fur person has returned!!! That is an amazing story! I have tears!! My orange tabby has no tail...and she adopted me. I need to go pick her up and hug her and kiss her and call her Smidge! And she's fluffy and smushy!
April 30, 2008 at 11:01 AM

deb said…
I'm so happy Edward is home! I was so worried you'd never find him or if you did it would be bad news. He looks exactly like my cat, Harley. We almost lost him when he fell off the window ledge and broke his hip. He's fine now and I'm so glad we didn't put him down. He purrs so loud like a Harley. Congratulations on the return of Edward!
April 30, 2008 at 11:25 AM

LaDonna said…
I'm still just so happy for you! Coop is a smart man, and what a fabulous surprise for him to bring home! And as for that wonderful family who brought him to the shelter...well, just THANK YOU!
April 30, 2008 at 11:50 AM

Anonymous said…
Oh Barb, I am so happy for you and your family. Every time I opened your blog, I said a little prayer to the Universe and any gods that Edward would come home.

Knitting Rose said…
I am sooo happy for you!! I have been waiting! I knew he would be brought back home - I just wondered how long it was going to take!! OH THANK GOODNESS!! And KEEP HIM IN!!!
Praise to the 15 year old who had the thoughtfulness to realize that someone probably loved him... Bless her dearly.
April 30, 2008 at 12:57 PM

Anonymous said…
I'm tearful all over again. I loved your story about the fortune cookie. Your husband is wonderful and so is the girl who thought he was someone's cat.
April 30, 2008 at 2:28 PM

Marion Gropen said…
I just have to chime in on the celebration! Thank you for sharing your joy.

And thanks should go to Coop for handling it so well, and to the young lady who recognized that Edward had a family that was looking for him.
April 30, 2008 at 2:40 PM

Karen said…
I have been waiting and waiting for this day and now I can't stop crying!!!!!

I've been off-line for 2 weeks (vacation and DSL failure) and I hesitated to read your blog because I feared Edward wouldn't be home.

Anonymous said…
I'm so happy for you! Hurray, Edward is back! What a wonderful story -- it was a rough start, but I hope this is the beginning of many good things as your family begins this new chapter in your lives.
April 30, 2008 at 3:50 PM

Anonymous said…
FANTASTIC!!
And Yay for Coop-he gets a lifetime's worth of brownie points, or whatever sort of points you award.
And don't you wish you had put a mini-camera on him so you would know what sort of adventures he has had?!
I'm just so glad he's back, safe and sound. I have a cat I love obsessively-just ask Heather-and I would be so upset if he wandered off. So I need to microchip him-great to know it does work so well!
jmokeeffe
April 30, 2008 at 6:10 PM

Annabanana said…
Now that my happiness has dulled to a low roar, I am thinking - amazing 15 year old with kindness and gentleness at the appropriate level = summer mom's helper at the beach, etc.!!!!

I've been waiting for freaking ever to read this post, I'm so stinking happy you got him back!!!! Yeah Edward!!!!

Anonymous said…
What a wonderful, wonderful story. I've been hopefully checking your blog for this exact thing. I just KNEW it would happen. Yea Edward!!!!
May 3, 2008 at 10:11 PM

Claudia from Idiot's Kitchen said…
Six weeks! I would have been a raw mess. This is proof that miracles, and especially cat miracles can happen. Thinking good thoughts!!!!
March 7, 2014 at 4:18 PM