Why didn't anyone tell me that you should never go ANYWHERE on the weekend here in New York???

Weekend before last, we went to Costco on a Sunday afternoon. Along with enough people to populate the former USSR. It was mind-boggling and to add to the fun and screaming, we took our kids.

Because we're masochistic that way.

THIS past weekend, we went to IKEA. We HAD to go on the weekend because the furniture from IKEA is so freaking heavy. In its boxes, I mean. It's very heavy in its boxes where it sits, waiting to be assembled.

Which is my way of telling you what we've been doing NON-FREAKING-STOP for what seems like forever.

Our old house in Austin had many, many built-in shelves. Which worked really well for us because we have many, many, MANY books. Here in New York, our house has not even one single built in bookshelf. (Don'tgetmestartedonwhatyougetforthemoneyuphere.) This lack of bookshelves presented something of a problem for us because, although we are beginning to enjoy having a box handy every time we want to set something down, we have so MANY boxes that we can never find anything after we've set it down on a box. If you follow that. Let me just say that for the three weeks we've lived here, our living room has had a Wall Of Boxes. (You have to say that in the Big Voice.) ("Harold, did you just use the BIG voice on me?") (Time for the latest edition of "Name That Movie!")

Anyway, I'm sure you all were picturing my house all neat and tidy now that the Roosters have been Banished , and OH, HOW I HAVE BEEN PICTURING THAT ALSO, but the reality is that we've been in IKEA construction hell.

It's been worth it.

Actually, that's pretty easy for me to say since all I assembled were some chairs, (one of which is defective and has to be returned, not that I'm bitter.) Coop did the rest.

These two cabinets... (and yes, the extension is missing from one of them. I forgot to buy it. I guess when I return the defective (not that I'm bitter) chair, I'll remember to get it. I hope.) 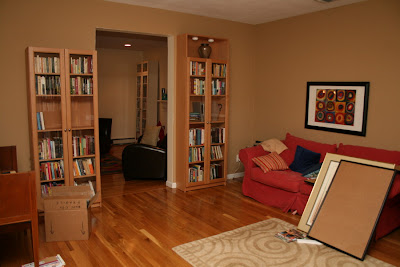 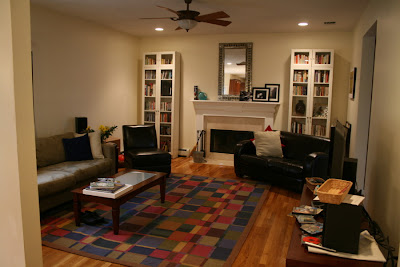 So, after he worked from the time we got our loaded-to-the gills van home from IKEA until 11:00 that night and back up at dawn to start again on Sunday in order to work all day, I gave my husband a present today and hired someone to put together the bathroom cabinets. Look, aren't they just perfect? 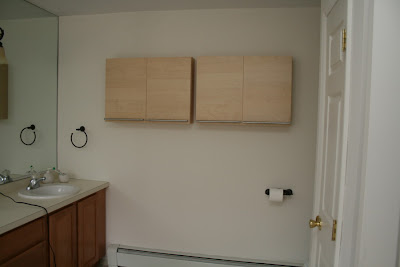 And my husband, to whom I have never been able to give very good presents? He said, "Wow, I can't tell you what this means to me. It's like you just gave me four hours of my LIFE."

I didn't have the heart to remind him of the shelf and towel rack that need installing in the girls' bathroom...
Email Post
Labels: Coop furniture gifts humor? I don't do linear--EVER The Great Cooper Move too much stuff

Suburban Correspondent said…
We moved last year, and I still have towel racks sitting around waiting to be installed. Larry and I both pretend they are not there.

Anonymous said…
I have yet to set foot in IKEA, despite the fact that there is a relatively new one approximately 15 mintues from my house. Everyone says, "OH, be sure you go when you don't have to take Jet, and it'll take you at LEAST four hours to go through it!"

Mon said…
I still have a wall of boxes in my garage. It's been 3 years! Did you ever see the movie "The Incredibles"? If you did, you have to remember the scene where the Mom calls Mr. Incredible at work, and says to him, wiping her hands on a dish towel,"Well, it's official, we are all moved in". He is like, "but we have been there 2 (or maybe 3, I don't remember) years, and she said, "yes, but I have just unpacked the LAST box!

I know what you mean about the people as well. Everything we did in the Bay Area involved a million people, and now, here in MT, it amazes me that I can go to Costco on a Saturday and have lines only 2 people deep. That lines at Walmart are rarely more than 2 or 3 people. There were times in CA, where I waited in line at a store for upwards of 30 or 40 minutes...

TheOneTrueSue said…
It looks great. I'm jealous of the bookshelves. I'm realizing this house - not so very much with the built-ins. Right now it feels like the boxes will NEVER be unpacked.
April 8, 2008 at 12:19 AM

I love playing that game with you.

Regardless of the putting stuff together and the angry mobs carrying torches (oh, wait, different blog) your house is starting to look like home. I see your stuff in your house and it makes me smile.
April 8, 2008 at 8:38 AM

hokgardner said…
If it's any consolation, from the pictures, the new house already looks like YOUR house.
April 8, 2008 at 9:01 AM

Brendy Vaughn said…
It really does look nice. It'll get there.

Memarie Lane said…
It all looks very nice. I've never even been to an Ikea store, but I used to shop from their catalog for a hotel I managed. I don't want to go in until I've got some cash in my pocket. Which might take a couple decades.
April 8, 2008 at 1:42 PM

DK said…
Oh! My God! Don't EVER go to IKEA on the weekend! Ever, ever, ever! I mean, don't get me wrong, I love (and miss) IKEA, but, the first two rules are, go right when it opens and only during the weekdays, and, always start in the little slightly imperfct section.

LaDonna said…
Oh, the reminder that you posted a new blog entry has been sitting in my inbox since yesterday! I just ran out of time, but now, I'm grinning and giggling!

"IKEA construction hell"!! BWAHAHAHAH!!! Been there, done that! But dang, IKEA is still my favorite store in the whole world! I miss it terribly and don't get to Minneapolis often enough with a large vehicle, so I haven't been there is SOOO long!

I wanna know from DK how in the WORLD you manage to start with the slightly imperfect section. The IKEA in Seattle (well, Renton) is set up with a little rat maze you have to follow and the slightly imperfect section is WAY at the end AFTER the warehouse. We did get our kitchen table in that section, though...and the nice IKEA people even lent us an allan wrench and a screwdrive to take it apart so it would fit in our car.

Your house looks great and I'm quite jealous about the bookcases since ours are still held captive in our crawlspace waiting for liberation (or the unfortunate posibility of donation.) Our IKEA has this great childcare option so that you can shop without the kids. It's great, if you can make it through the store and register line in an hour, which, ironically, is impossible. So much for convenience.

The second thing is that we're approaching our second anniversary in our "new" house and we haven't hung any pictures on the walls. they are leaning against the walls just taunting me!

The third thing, because I lied about being only two, is that one of the greatest things about being at home with the kids is that you can go out and about without crowds when everyone is at work. Sorry for the weekend errands. May they be few and short in your future.
April 11, 2008 at 5:17 PM