Wait, that title didn't sound right. I meant it was a dreary MONDAY, not that my stuff was dreary. (Although, maybe BOTH are dreary. If so, don't tell me.) It's raining. In fact, it's POURING. I do not know about the old man, but my old DOG is definitely snoring.

It occurred to me today, as I am STILL unpacking boxes and trying to find places for everything we've already unpacked, that I'm a little embarrassed over how long all of this is taking me. I mean, we've been here since March 15th, more or less. Shouldn't we be all moved in by now?

Part of the problem, I think, is that we can't decide where things should go because of the lack of readily available built-in-shelves like we had in our old house. I mean, if someone BUILDS-IN shelves, you pretty much know where to put your books, right? Or if you have something called a PANTRY, you know where to put your canned goods.

To add to the confusion, we have a basement for the first time ever but we're sort of afraid to put anything down there until we get it finished out because it's kind damp and basement-y. Even with the de-humidifier running night and day. But we don't have an attic, nor a big storage shed here so we're sort of at a loss over where to put the stuff that we put in the attic and storage shed when we lived in Austin.

Mostly, we've just been giving it away.

We've got house guests coming. (Dudes, I cannot wait! My parents are coming some time in May, as is my father-in-law, AND my brother-in-law is stopping by after a wedding for a few days. I am never happier than when family is visiting.) Unfortunately, our plan to have the basement finished has been put on hold due to our plan for selling our house in Austin not yet falling into place. (Sigh.) Initially when we were moving into the house, I thought we'd use the extra room upstairs as a craft room/ kids' library/ game room. I thought that Coop and I could share the tiny downstairs room (the so-called "Maid's" room-- if your maid is a pygmy) as an office.

But the Pygmy Maid's room wouldn't really accommodate two desks, so Coop's desk joined the kids' library and the game room and the craft room upstairs. And then, since the basement guest suite won't be materializing for a while (everyone, eat some spaghetti, quick!) we had to put a bed in that room, too.

So, then, you had to be a pygmy to get into TWO of our rooms.

I made the ultimate sacrifice and moved most of my craft stuff into my little office downstairs today. It now looks like this: 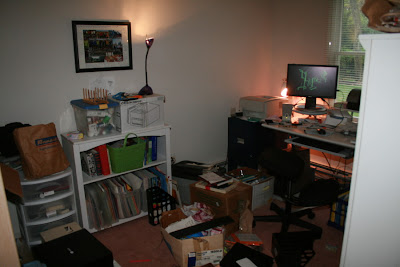 Or, THIS, depending on where you're standing. 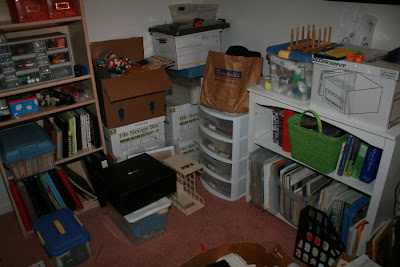 I know it's hard to imagine that this is the result of a full day's work but, well...

It's the result of a full day's work. 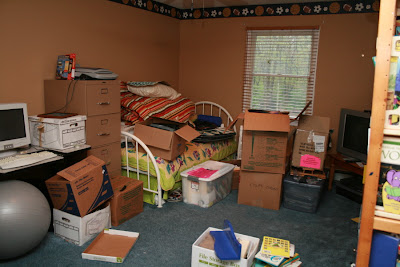 Which again, doesn't LOOK like much of an improvement but trust me on this, it really is. Although I'm with you, I feel like we should be further along on this moving in thing.

(We're replacing the twin bed with a big comfy futon, Mom! I swear you'll like it and want to stay for a month. Really. And by the time you get here, I promise you'll be able to see the floor. And I'll have lost some weight. And I'll remember to get a hair cut. Seriously. It's a whole new me.)

I felt SO GUILTY.

My new bra with the memory foam in it?

Kelly and Stefanie have been asking about Thomas, our OTHER orange cat, because he hasn't been blog fodder lately. That's the thing about Thomas, most of the things that we love about him are not really bloggable --like the way he can't purr right and so when he's really happy, he just sort of wheezes. He's doing great, though. He's stepped up the level of his snuggling since Edward has been gone (and the cat was already a professional snuggler) and now in the middle of the night, it is not unusual for me to wake up and find Thomas with his head pressed against mine, HARD. I love that. Anyway, here he is and he's doing fine. 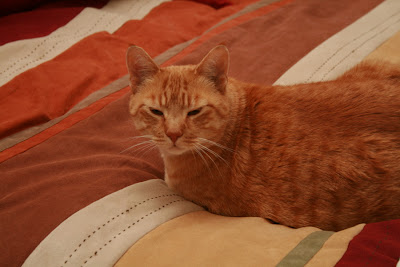 Might even have lost a bit of weight...like an ounce or something.
Email Post
Labels: cats Coop Edward humor? OCD? Not me. The Great Cooper Move too much stuff

Unknown said…
"I FELT SO GUILTY"

I actually snorted, Barb, I kid you not.

I'm eating spaghetti for you love. I have not lost an ounce for all the carboloading I've done on behalf of my friends and people I am related to lately...so I have no qualms eating another bucket full of badness for your guest suite. That's what friends be for. Argh.
April 28, 2008 at 7:23 PM

Suburban Correspondent said…
I think I could use some of that memory foam sort of all over.

Unknown said…
orange cats are the world's best snugglers. I had one for many many years and lost her last summer. sigh. Your Edward looks like he's very nice.
April 29, 2008 at 1:08 PM

Sarahviz said…
I have that memory foam too....

Anonymous said…
So I was about to comment that my WHOLE HOUSE looked like your current pictures of your office when it suddenly occurred to me that it was no longer true. My whole downstairs is more or less clean. All of my superfluous possessions are in storage. From the FIRST floor, anyway. And it only took two years!
April 29, 2008 at 7:24 PM

Unknown said…
Did you notice that Edward showed up the DAY after you wrote a blog that included Thomas? Could it possibly be there is some catty diva vibes going out from your house? :p
May 1, 2008 at 11:48 AM