I haven't written a lot about my foot lately because there's been no real news and how many times can you all read about how gimpy I am before you start throwing things at me? I had major reconstructive surgery in March of 2007 and while that went very well (long recovery but that's to be expected given that I have three screws in my foot now, and some artificial material that is supposed to make my foot feel like it has more bone than it does, etc., etc.) it created a whole host of other issues that we've been resolving one by one.

Until we got kind of stuck. Um, painfully stuck. We were trying a series of injections to just obliterate the nerve when I up and moved from Texas to New York.

My Austin podiatrist (Craig Thomajan--love, love him) referred me to a doctor up here. The new Doctor, Bernard Martin (no website that I could find, no e-mail), actually was the director of the program where Dr. Thomajan did his residency. (So, naturally, I had to accuse Dr. Thomajan of wanting to show off his work to his former director. Because I'm nothing if not tactful like that.)

Anyway, my appointment to see Dr. Martin was yesterday morning.

In Queens. Which is a fur piece from where we live on the Island.

I wasn't completely reassured to see that Dr. Martin's office was next to a tombstone store. Look, I took a picture with my phone to prove it: 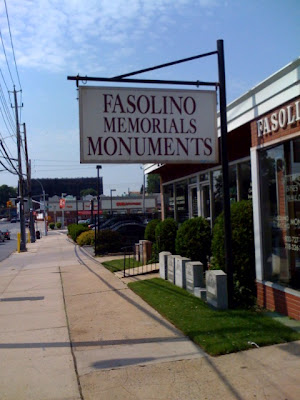 The office itself was small and kind of dirty--just the opposite of Dr. Thomajan's office in Austin which is light and bright and modern and has every technological advancement known to feet. (Dude rocks.)

Dr. Martin came into the room. I can't tell you how old he is but I think maybe ten years older than I am, maybe in his fifties? He made me want to sit up straighter and address him as "sir," you know the type? He's sort of a low talker so I had to listen very intently to catch what all he was saying.

Not that I could make any sense out of it because the thing about podiatrists is that they LOVE their scientific names for things. Dr. Thomajan does this, too. I'm all for that, of course, but in recreating our conversation for you all, I may not be completely accurate in my terminology.

So, I started to tell Dr. Martin my story. "I was born with my foot pressed up against my shin..."

(I resisted the urge to say, "Gesundheit." I was pretty sure Dr. Martin wasn't going to get my sense of humor.)

I told him everything I can remember about the oddity that is my foot. He questioned me. ("And does the whiffleballdermititus still bother you?" "Have you had any additional problems with the papermachemacchiato?")

And then he took my foot in his hands.

And I knew, see. Here were hands who had seen thousands of feet. MY FEET WERE IN GOOD HANDS.

All of the plasma ran out of my body and pooled on the ground. Big exhale, the first of several in this doctor's appointment. Such a relief.

I explained to him about my weirdly high tolerance for pain (not to be confused with any lack of desire for whining, mind you) and how that made it very difficult for me to describe or locate pain. I only know that every step hurts and I am still limping along after a year and that it's having a really big and awful impact on my life. (As I write this, my husband has taken my kids and my cousin into New York City to go to the Museum of Natural History. I had to stay home because I can't do that kind of walking. Sucks eggs.)

His hands were still moving over my foot. I remember understanding one thing he said which was, "I'm impressed by your lack of motion."

Anyway, we talked about how I would need to find a way to describe the pain and not only describe it, but to rate it on a scale of one to ten. He took an hour or so talking though some of the possibilities of what it could be ("Acute inflammation of the alpaca-tilapia tendon") given that he still doesn't have the records from my Austin doctor. We talked about the various things Dr. Thomajan had done to try to diagnose the problem. He made me walk around in the office area (and eww, ick, that carpet did SO not look clean.)

And then he stuck his thumb into the little cavity by my ankle bone and I almost wet my pants.

He nodded. "Yes, I really think that what we have here is scar tissue filling up the giraffesplendora-ripplicious cavity which is causing a condition called tarsalchowmeinmaxinificous."

Finally, something I understood! "Oh, I know that! I know that! I am very familiar with scar tissue because I have had TWO c-sections!" I beamed at the man.

So then he took a syringe full of lidocaine and he shot that into the cavity right there by my ankle bone. It took about five minutes (he wasn't kidding about that cavity being full of scar tissue) during which I just could not help myself. "Duuuuudddddeeee," I whined, all respectful and professional.

So, then? I felt no pain. No. Pain. There was nothing painful in my foot.

It was like in the Wizard of Oz when it goes from black-and-white to color --I can't even describe the sensation. I hadn't realized how much pain I am in on a daily basis until it suddenly wasn't there anymore.

I was kind of speechless. (Actually, I thought for a minute I was going to cry.)

He had me walk across the office again and dudes, it may have been dirty but I would have TAP DANCED if he'd asked. (Well, maybe. He did ask me to get up on my toes and run a bit but my foot doesn't actually bend like that anymore so it was a no go.)

So, he told me the lidocaine would work for about two hours but he thought that if I came back on Tuesday and had a steroid shot, I might get several weeks of relief. After that, we might just have to see whether or not to go back in and clear all the scar tissue out or what.

Then he looked at me closely and said in his dry, matter-of-fact way, "All of the pain is gone from your face."

I could have kissed him.

As I left his office, I noticed that one of the bordering streets was named "Cooper Avenue." 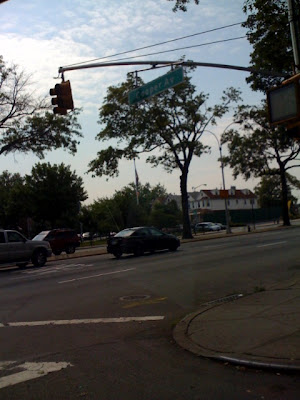 Unfortunately, on the way home the Long Island Expressway (the L.I.E. the locals call it. I call it a big fat LIE. Expressway, my arse.) was closed down and all traffic was diverted off and around so I spent my entire two hours of lidocaine relief in traffic.

But I tapped my foot the entire way home anyway. In my mind, I looked like this:

Suburban Correspondent said…
Oh, poor Barb! All that pain! Your description of the relief reminds me of the day when I wake up and the morning sickness is (finally) gone. Like, "Hello! Where have I been? I'm back! I love life again!"
June 22, 2008 at 12:31 PM

Lynn said…
I have the insanely high pain threshold, too. [I'm the one who walked on a broken leg for two months before getting it properly diagnosed, because it didn't hurt as much as when my gall bladder blew out.] And I know what you mean about that feeling of profound safety and relief when you know you are in the right hands.

LaDonna said…
Oh, I'm so happy for you to have finally found the source of your pain! Yes, isn't it that an amazing thing about pain? We know it's there, we know it affects our lives, but we just to realize the extent until it's completely gone! Then we wonder how we tolerated it for so long!
June 22, 2008 at 7:06 PM

Brendy Vaughn said…
That's fantastic! I'm so glad he was able to help you.

Susan said…
Barb, I have a great appreciation for good writing and this post is one of the most well-written humor posts that I have ever read! Kudos to you!
June 22, 2008 at 10:31 PM

Tenna Draper said…
Recently, I had lidocaine shot into my dequairvains tendinitis, then the steroid shot right after.
Lidocaine numbs it, and lidocaine stings hot--I cried when it was over because I was so happy it was over.

hokgardner said…
Congratulations on finding a good doctor. It makes all the difference in the world.
June 23, 2008 at 9:35 AM

Marie said…
Oh Barb, that is too funny! Don't you love it when we can find humor in things that would make normal people lie down in traffic? (eye roll)

I am so sorry you are struggling with your foot. Feet and teeth, if either one is causing pain it is just consuming. You can't think of anything else. Although I have to say after having been a mother for 31 years and having made a TRILLION trips the the Museum of Natural History, I would rather have gone to a podiatrist. lol

Miri said…
"alpaca-tilapia tendon" I know JUST what you're talking about. And you are so freaking hilarious. I hope the foot doctor can fix you and you can visit all those museums and soccer games pain-free!
June 23, 2008 at 1:39 PM

Suburban Correspondent said…
I forgot to mention yesterday just how much I enjoyed all the medical terminology.
June 23, 2008 at 5:03 PM

Katie said…
I have a strange desire to eat Chinese, have a coffee......and watch Animal Planet. ROFLOL!!!!

You have a gift. Barb, I just finished your book OMG! I laughed,cried and related till my hubby told me to knock it off and "just go to sleep will ya??"