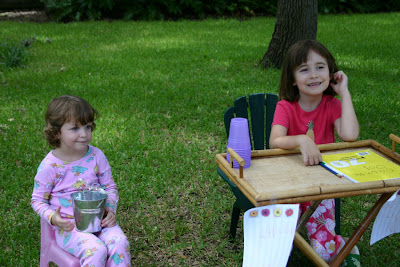 It used to be so simple having a Lemonade Stand. I'd set up everything, the girls would make the sign, I'd make the lemonade and then the girls would sit and look so adorable that every single passer-by would pay a quarter for a cup of lemonade and sometimes a hand-drawn picture. The girls would split the profits and go to bed, sticky and knowing they had assuaged the neighborhood's thirst.

(Just to explain: the picture above was taken in 2004, which was the year that Jane refused to wear anything but pajamas. Yes, for an entire year. Seriously. What?)

So, yesterday, Ana and her good friend set up a Lemonade Stand. From the beginning there was dissension over who, of the kids on our street, could be involved and who got to do what important task. There were tears. There were apologies. There was a lot of talking about feelings.

There was a LOT OF DRAMA.

By the time I went to pick up Jane from school, things seemed to have settled down. At least, people had stopped crying and lemonade was being sold. I was pretty proud of Ana up to this point because she managed to not get involved in the "who gets to be involved, who's horning in, who gets left out" histrionics. Ana has been my child for almost all of her 10.25 years and she knows if she starts that kind of stuff, whatever event she is involved in will come to an abrupt end. I have so little patience for the politics of exclusion.

The introduction of her little sister to the mix soon changed THAT, though. Things disintegrated in a hurry. There was fighting. Jane said "Damn" in front of everyone, because, you know, I wasn't mortified enough. (It's not the worst word she could have picked up, but still.) She ran home crying. I was now pretty (damn) cranky. As time came to split up the profits, I actually found myself saying, "But who provided your seed capital? If you are not going to pay your labor force fairly, then you will have to pay me for the supplies you used."

(Call me Mrs. Big. Next, I'll be requiring an annual report and an audit that conforms to the SEC standards.)

And oh, look, everyone is crying again.

WHOO-KAY then, let's all just pack up. The other mother involved said, "This is my FIRST lemonade stand and this is my LAST."

Sometimes I wonder if what I really miss most about my life in Austin is the uncomplicated childhoods of my children that we seem to have left behind there. I mean, I remember when a staging a lemonade stand didn't resemble the Mid-East peace process. 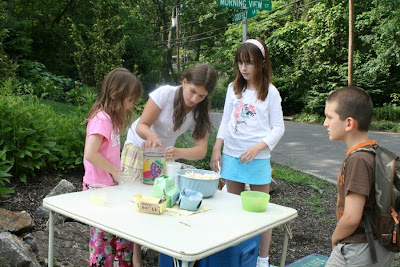 Ei said…
It seems to be a lemonade kind of day around the blogosphere.

Your girls are negotiating their way through being the "new kid" and figuring out still how and where they fit in. That might be part of it. Hugs babe, they are still sweet little entrepreneurs.
June 17, 2008 at 9:45 AM

Suburban Correspondent said…
I think it may be age and not location. Things are simpler when they are little.

Oh, and I do charge mine for the ingredients. And explain gross profit v net profit until their eyes glaze over.
June 17, 2008 at 9:51 AM

Miri said…
Yesterday Madeleine (9.5) and her cohorts made Sarah (7) pay for her lemonade!

Yeah, not so cute anymore.

And our family's always been with SC on this... my husband even explained taxes to the girls. He takes his taxes in cookies and koolade. What a Hun.
June 17, 2008 at 10:08 AM

Memarie Lane said…
The hoodlums next door have been setting up a lemonade stand every Saturday. I think people only buy from them because with them, it's not so much lemonade you're buying as protection, if you know what I mean.
June 17, 2008 at 10:24 AM

hokgardner said…
We did a lemonade stand last year and made the kids pay for the supplies and start-up capital for change. They still made a fortune. They've been begging to have another, but given that we have afternoon temps of 100+ each day, I'm not willing to set one up just yet.
June 17, 2008 at 2:14 PM

Sherry Sea from Austin said…
I guess I got lucky. My daughter never liked the kid down the street, so when he started doing lemonade stands around age 5 (he's a future Wall Street trader, you can be sure), she decided she would never, ever give it a try.
June 17, 2008 at 5:33 PM

Patti said…
It is mainly a girl thing, I am sorry to say. My girls would negotiate, barter, boss and beg their way into running the show and there were always tears, hurt feelings, sulking, pouting and calls from mom to mom. (sometimes the girls cried too) (Just kidding).

We had a little girl who lived behind us when my "came along later" son was young. One time she came to play on our swingset, as she did every day, and he ran out to join her as he did every day, but she had a friend over and told him "I don't need to play with you, I have a real friend today". I heard it and waited for the wailing to begin, but he just said "okay" and proceeded to swing anyway. I LOVE little girls and LOVE my daughters but dear God what a relief to lose a little of the drama!
June 18, 2008 at 8:35 AM

DK said…
Oh, the drama of being that age. And I'm totally with SC on this (although I also love the idea of taking your share in goods rather than capital. Plus, you can write it off to spoilage and get the tax deduction...wait...sorry) - what a great opportunity for lesson in basic economics and capitalism. Once everyone stops crying, of course.
June 18, 2008 at 12:18 PM

ckh said…
My kids, armed with sharp knives, cut up two of my lemons (purchased at a dollar each) then sold the lemonade for $.25 a cup making a grand total of a dollar in revenue, but didn't pay me for the cost of goods sold.

They had fun, and so did the neighbor who bought all the lemonade, too. At least there's that.

On a similar note, I just read in the paper today about some guy who robbed a little girl of about $17 from her lemonade stand. The girl chased him into his house and called the police on him. He was arrested on felony burglary charges.