Queen for the Day 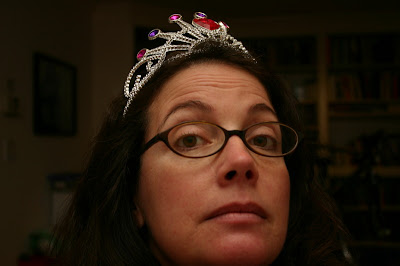 I'm not sure why but I was in a terrible mood all day yesterday. Maybe it was that my housekeeper was supposed to come and I got the call that she's coming today. I can deal with a certain amount of clutter and chaos but when it goes over the line, something in me snaps and I am miserable. Plus we have a house guest, an old friend of Coop's and mine and the nicest, nicest guy, and he was going to stay in the spare room where we had our recent plumbing adventure. It took me almost three hours to clean that room because there was this layer of sheet rock dust on everything. (Well, okay, part of that three hours was taping and floating the huge hole in the wall and creating MORE dust by trying to match the texture, which meant sanding and...well, it got ugly.)

Anyway, I am not complaining about this (much) but the fact is that no one in my house has eyes to see the mess. My husband is the best man on earth but he just cannot see it. And my kids--there's still hope for them, but let's face it, putting up sixty million Polly Pocket pieces is not on their daily agenda. Anyway, it might have been that.

Or it might have been a little honest soul searching and realizing how hard it's going to be and how long it's going to be before I get back into shape. I haven't exercised since January when my foot said, "NO MORE!" in the middle of a speed walk with my friend Laura. It bums me out because I've never been so out of shape and heavy before in my life--not even when I was pregnant with Jane and had to do 20 weeks of bed rest. I was a lot younger then so I still had some native muscle tone. Now? Not so much. Um, not so...at all.

And then my children. Ai yi yi. The fighting. The food struggles. The bickering. The competition. The selfishness. The unhelpfulness. The hypochondria. I was pretty much at the end. Of. My. Rope. When I put the girls to bed last night, I was not my normal fun self. I was crabby and short with them and I just wanted someone to DO AS I FREAKING SAY.

But see, the girls conspired together (without fighting!) and today, I was made Queen for the Day. Seriously. I received the crown, 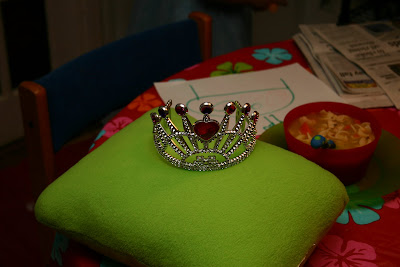 delivered by a lovely little princess at, ahem, 7:15 in the morning. But this was my reward for waking up and immediately trying to fit that tiara on my head. 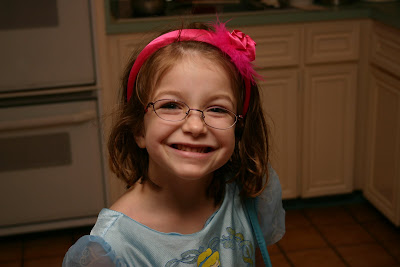 And I wore the crown with pride, despite my unshowered and uncaffeinated self. See? 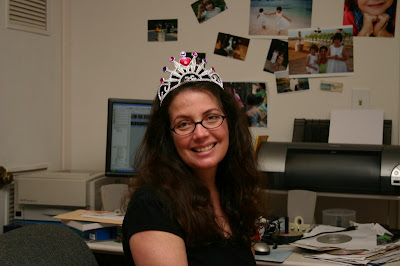 I don't know. Being the Queen for the Day basically means only that I get to wear the crown(so far, things have been pretty much the same as always.) But, you know, the crown is pretty fun --I'm sitting here typing with it on. And my housekeeper is here. And maybe I'll sign some royal proclamation and get to take a nap later.

I laughed. I didn't feel that much like a queen, cooking chocolate chip pancakes in shorts and a sweatshirt and trying to remember whether I'd brushed my teeth. She raced back up the stairs and came back with a crown for me.

Cooking chocolate chip pancakes in a CROWN is a whole different experience.
June 24, 2007 at 1:35 PM

Madame Ex said…
Great insight that they don't even SEE the mess. Last week my daughter thoroughly cleaned her room--very thoroughly, because that was a condition of bringing home a pair of mice her friend had offered. The next day I went into her room and asked, "Why are your DVDs on the floor at the end of your bed?" And she said (seemingly sincerely), "Oh, I didn't know they were."

They were hard to miss, with the rest of the floor entirely clean, and she must have put them there, but I BELIEVED that she somehow didn't know they were there...this child who is a whiz at "Where's Waldo?" and the "I Spy" books.
June 24, 2007 at 1:40 PM

Marion Gropen said…
Yup, there's a gene for the ability to see things sitting in the middle of the floor. It doesn't seem to express itself until after adolescence, though. And I think that it's recessive in men. Certainly my husband doesn't have it!

In any case, I have definitely been in your shoes, and am so happy for you that your children came through with such a touching gesture. You're obviously doing some big things right with them!
June 25, 2007 at 1:52 PM

Anonymous said…
Lovely writing and keep the crown on. You are queen of your little empire.

Stop by often. Glad to have discovered you. Cheers!