The Smell, long awaited sequel to The Itch 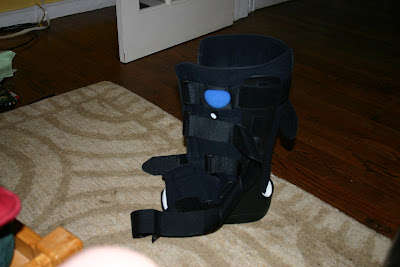 It's been eleven weeks now, since the massive reconstruction of my foot. My foot is really looking very good, considering the three screws and the missing bone and all. I am enjoying being in the walking boot instead of on crutches, which, although entertaining to bystanders, led to some pretty embarrassing incidents. I am all about avoiding embarrassment when possible because, let's face it, my children are already a little wary of going out in public with me.

Especially now, good Doctor, because an Issue has arisen. Honestly, I don't want to be a whiner. I know you didn't actually devise the bulk of this process with the idea of causing me public humiliation and perhaps a more sedate and dignified person would have handled things differently. There was the moment in Central Market when I spilled the bulk cumin scooper on my boot. Everyone knows that ground cumin smells like, well, body odor--at least until it's added to black beans when it becomes the nectar of the Gods and can make you crave black beans at three in the morning. But I digress.

I don't exactly know how to tell you this but, well, that boot stinks. I mean, there is no denying it. It's not the cumin --at least, not all by itself. It's in the 90's here and I'm in my sixth (I think) week of wearing this thing and when I take it off to put my foot up, the stench that wafts upward makes my eyes water. I keep warning people not to light matches around me--I'm afraid the boot will explode.

I am coming to see you in another week and I had great hope that I would be able to get out of this boot and into some sort of shoe but the truth is, I still can't really put much weight on that foot without the boot. (And, not to whine further, but can we please devise some sort of aerobic exercise that I can do with this boot on? I'm starting to resemble Roseanne Barr here.)

I know you told me not to wash the boot but honestly, it's either I wash that boot or risk spontaneous combustion. I'll hold out as long as I can --but you'd better be prepared in the event that I don't wash it before I see you next week. You might want to have the HazMat guys standing by...