No, really, guess! Gosh, you won't ever play this game with me! Mean, you're so mean! Aw, come on, guess!


YES, you are right. I AM drinking a glass of wine. Just a glass, though, and my FIRST glass so I'm not all giddy because of that.

I'm giddy because I'm sitting here watching Home and Garden Television with the sound off (because I am listening for the Spawn of Satan my daughters, who are supposed to be sleeping right now but who have come downstairs another 652 times since the official Lights Out.) And I have created a new game. Are you ready?

Here's how it works: you watch the show with the sound off and you try to count the number of times the people onscreen say the word, "pop." (Because in home decorating shows, the color never just sits on the walls. It's active! It's perky! It POPS!

If you want to take the game to a higher level, you count how many times you see someone mouth the word, "space." Because no houses on HGTV have rooms. They have interesting spaces. And if you paint a space an interesting color, it will pop.

Oh, gosh, you're very smart. Yes, I'm the sole parent in charge this evening. Coop is traveling again. He left today for Seattle. Before he left, though, he worked like a dog rewiring most of our incredibly complicated electronic gear so that it would fit into this: 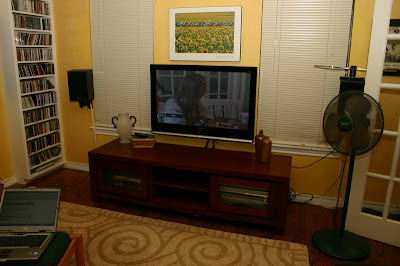 I am totally stoked because I really liked this TV stand when I saw it in the showroom at Four Hands but it was $895 and I didn't like it THAT much. I liked it a lot better at their Warehouse Sale for $250. SCORE!

(Note the mute sign in the bottom left corner of the television. you can see it because that TV is six hundred feet tall. And it's such a guy thing --every guy who comes into our house shields his eyes from looking at that TV, as if he's afraid he will be so overcome with envy that he will rip it from the wall and run screaming down the street. Good luck to him because that thing weighs, like, five thousand pounds. Which is why it's easier to redecorate our living room and buy all new smaller furniture than it is to think about maybe moving it to a different wall. But I digress.)

Want to see something else? Look here: 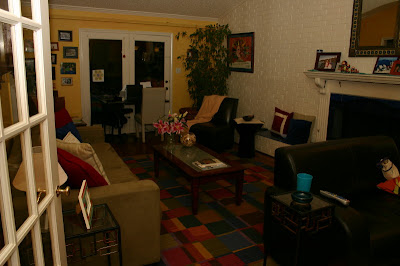 THAT, my friends, is is one darn clean living room space. For us, anyway. Our housekeeper came today and the house is actually still clean. I want to enjoy it but I know it's only clean because the Messy Boy isn't here and the fact that it's still clean really means that we weren't having near as much fun as if he was here with us. I don't know why it's always a trade off--this whole cleanliness vs fun thing. Is it just in our house or is everyone that way?

Well, not YOU, of course. You're always totally together AND having fun. But then again, you're a total figment of my imagination.

Which is pretty pathetic, now that I think about it.

hokgardner said…
My challenge every week is to keep the main part of the house clean for 24 hours after the cleaning lady leaves. And with 3 kids, 2 adults and a constantly shedding dog, I'm not always successful.
June 11, 2007 at 9:01 AM

Tiffany said…
In law school, we gathered to watch Frosty the Snowman with alcohol--everyone had to drink every time someone said "snow". Your game might be even more fun that way...
June 11, 2007 at 4:57 PM

Barb Matijevich said…
Four. Count 'em--FOUR animals who shed. What the hell was I thinking?

And Tiff, your game sounds like the game we used to play while watching old Bob Newhart reruns. Every time someone said, "Hi, Bob!" we drank. A lot of people said hi to Bob.

I guess I should sign this Satan but the truth is, I'm too tired to be truly evil. I've been worn down.

DK said…
Ah, good. I'm glad I wasn't the only one who thought, hmm, that sounds like a good drinking game....