Okay, so this is really funny. Apparently when the Yarn Harlot was in New York City not making my fantasy come true by dropping all of her real responsibilities to immediately sit down with MY book at the BookExpo of America, she accidentally left her sock-in-progress behind. Some other knitters are holding it hostage. Read this.

So, I left a comment. (Unfortunately, it posted twice. What can I say? I got a little excited about the whole idea.)

You know how Stephanie always takes pictures of a sock while she's on tour--and how they are always pictures of knitters and landmarks, etc? What if y'all took all kinds of pictures of the sock in various places? I'm torn between it being like one of those kidnapped garden gnomes and all wholesome in fabulous venues OR if you should take the pictures of the sock in distinctly ANTI-Stephanie places. Like on a huge stack of Velveeta. On a slab of baby-back ribs. Or in the polyester sock bin at Wal-Mart. Being run over by a bicycle (not REALLY run over --we wouldn't want to actually HARM the sock.) Bungee jumping.

Sadistic? Hey, I got perky and evil going on in Texas, too. And I can't WAIT for the next installment!
--Barb

So, then I started going off the deep end picturing all the places I'd take the sock and photograph it --all the decidedly anti-Stephanie venues. Like a Republican Pro-War rally or something. Like in the CROCHET HOOK AISLE at Michael's.

Ah, me, I kill myself... Subversive knitting humor, who knew?

PS: No socks were harmed in the writing of this post. Not even my own sock-in-progress. See? Doesn't it look happy? 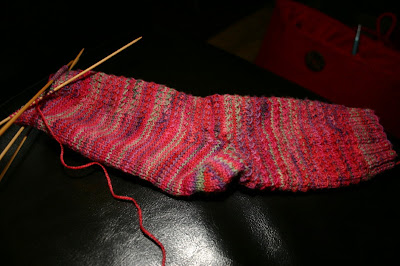